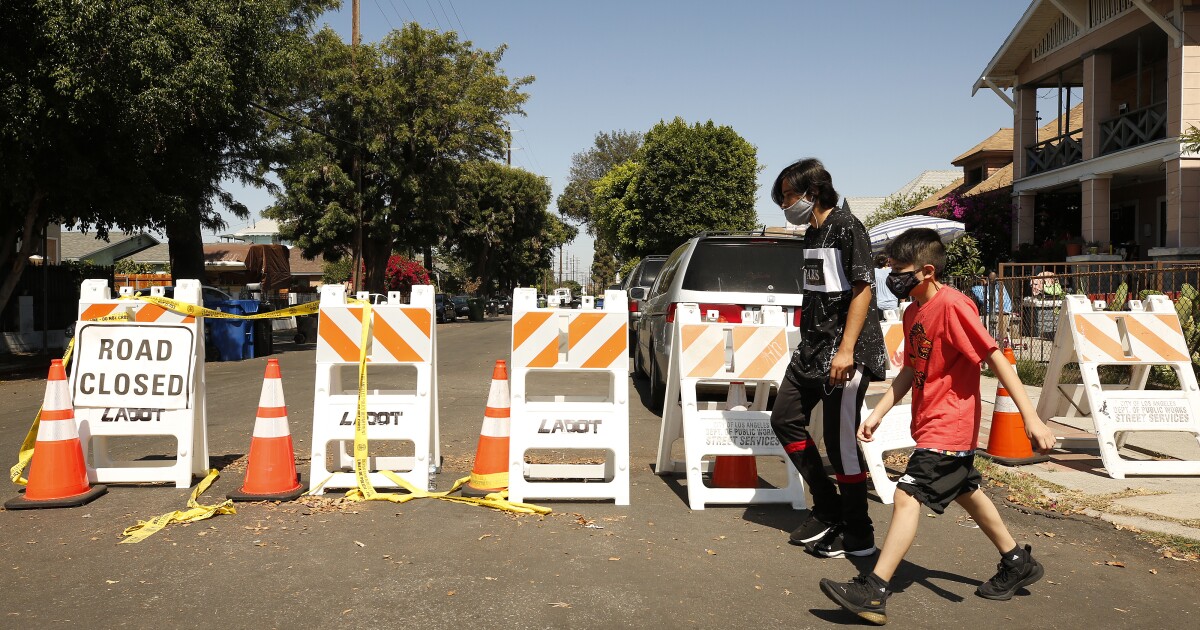 Even before the Los Angeles Police Department blew up the residential block in South L.A. where her family has lived for nearly two years, life was hard and full of worry for Juana Oceguera.

The 41-year-old mother of five was barely scraping by, working irregular hours in a T-shirt printing shop and cleaning houses to help pay the family’s $2,600 monthly rent. She worried about her 14-year-old autistic son, her husband who is disabled and awaiting eye surgery and the status of her older kids’ applications to remain in the country safely under the federal Deferred Action for Childhood Arrivals program, or DACA.

Today, however, things seems so much more uncertain, she said.

More than a month after the LAPD blew up the 700 block of East 27th Street while trying to safely detonate a cache of illegal fireworks, displaced families like Oceguera’s and others who have remained in less damaged homes on the street say they are still struggling to piece their lives back together.

Some complain of injuries suffered in the blast. Others have lost work. Some say they will never regain what they lost.

Inspectors have told Oceguera’s family they can move back into their apartment, but their landlord has told them to hold off. When Oceguera visited, she noted cracks in the walls, while her son fretted over the family cat, who couldn’t join them at the downtown hotel where city officials put them up as the mess gets sorted out.

“Mom, when are we going to take her home?” her son asked, after visiting Ivy in a shelter.

Oceguera didn’t know how to answer, she said, because she doesn’t know where home is anymore.

Geraldyne Lorna Hairston said her longtime partner, Auzie Houchins, 72, died July 22 after their home — next door to where police say they found the fireworks — was badly damaged in the blast, the windows shattered. Officials confirmed he is one of two elderly men who lived on the block and have since died.

Hairston, who uses a walker, and Houchins, who used a wheelchair and had other chronic medical conditions including Parkinson’s disease, were forced to leave and move into a motel, she said. The stress was overwhelming, Hairston said, and Houchins never fared well with change.

Though the L.A. County coroner said Houchins’ death was natural and the result of “sudden cardiac dysfunction” and arteriosclerotic cardiovascular disease, Hairston blamed the LAPD’s actions and the weeks of turmoil they caused.

“I want to see what value the city is going to put on his life,” Hairston said this week, from the same hotel where Oceguera’s family is staying. “This man was not going to be dead.”

Her question is one of many that have gone unanswered since the blast, which remains under investigation by the U.S. Bureau of Alcohol, Tobacco, Firearms and Explosives, or ATF.

Police officials have promised to make the findings of that investigation public. They also have said that a preliminary review indicated that the explosion was probably caused after officials confiscating the fireworks miscalculated the explosive power of homemade devices that they had placed into a “total containment unit” to be detonated at the scene.

Police said the devices were detonated there because they were deemed too unstable to transport. The containment unit was meant to absorb whatever blast ensued. In the moments before the detonation, police had told some residents to evacuate or remain inside, and others that they would just hear a loud bang but not to worry.

Instead, the June 30 explosion ripped through the neighborhood — blasting out windows and badly damaging homes and businesses. Those in the immediate blast zone fared the worst, but damage stretched for blocks.

In response, Councilman Curren Price’s office moved in to assist with housing those who were displaced, setting up a $1-million emergency relief fund and eventually booking rooms at the Level, a luxury hotel downtown.

As of this week, more than 80 individuals from 25 households remained in 29 rooms paid for by the city, said Angelina Valencia, a spokeswoman for Price. Many had no idea when they might return home.

Valencia said the councilman’s office was also preparing $10,000 grants for families and had hired a contractor to complete as many repairs on the block as possible by the end of this month.

However, some property owners have expressed reservations about letting the crews onto their properties, in part because they fear that accepting aid now might preclude them from filing legal claims against the city.

Valencia said that belief was misplaced, and that there was no end date for when the families will have to move out of the hotel.

“We are committed to providing them with longer-term housing, as necessary,” she said.

LAPD Chief Michel Moore said the police are committed to getting to the bottom of what happened and helping those families affected by the explosion — including by keeping a patrol vehicle on the block 24 hours a day to keep them and their property safe.

However, during a recent Police Commission meeting, Moore denied responsibility for the two recent deaths, saying his understanding is that both men had “underlying health conditions” and that their deaths were not the a result of the explosion.

On a recent afternoon, cones still blocked off 27th Street at Stanford Avenue, with a small gap for residents to maneuver in and out. A wooden rosary hung from the black security door of one home, next to another where wooden boards covered a window. Across the street, the Virgin Mary clasped her hands beneath another broken window.

Yellow “Restricted Use” signs hung in English and Spanish from front doors and gates prohibiting access to unauthorized personnel, noting that the homes “may be dangerous to occupy.”

“It is a pretty dire situation,” said Ron Gochez, a community organizer with Unión del Barrio who has helped organize residents, some of whom have lawyered up and filed claims against the city.

Maria Barajas, who has lived on the block for 33 years, said she and her husband were on their front steps when the explosion shattered the window of her son’s bedroom, sending glass onto the bed, and broke the home’s side door — which now doesn’t properly shut, letting in flies.

Barajas said she also has a ringing in her ear that won’t stop, especially at night when she tries to sleep and when she’s chewing food. She said she was paying to see a specialist out of pocket because Medicaid wouldn’t pay.

After a month of ear pain, with the damage to her home still not fixed, she said she feels “forgotten.”

“One tries to have their house and live peacefully,” she said, “and then, boom!”

In addition to residents of the block, local workers were harmed.

For the last 19 years, Lilia Rodríguez Martínez, 53, has owned a beauty salon at the corner of 27th and San Pedro streets — closer to the blast site than many of the homes on the block.

She had been off that Wednesday when the explosion occurred, but learned of what happened after family members and friends messaged asking if she was OK. The next day, she drove from her home in Victorville to go to work like normal but struggled to get anywhere near her family business.

When she got inside days later, she saw the mirrors were broken. The doors had come out of their frames. Her television wouldn’t turn on and the microwave and refrigerator weren’t working.

The explosion had damaged the building so badly that she can’t work. She herself makes around $1,500 a week, but hasn’t worked in more than a month.

Now, her savings are almost gone, she said. “I’m living day to day.”

Marcelino Jimenez, who works at an appliance store across from Rodriguez Martinez, said the explosion shattered glass there, too, and sent shards into refrigerators that then had to be thrown away.

The store was closed and lost income for a week, he said.

“We lost a lot,” Jimenez said.

At the Level Hotel downtown, another displaced resident, Natalie Quintanilla, said her frustration has only grown over the last month.

Quintanilla moved onto 27th Street a year ago with her 11-year-old daughter, 5-year-old son and 18-month-old son. She was there the day of the explosion, at first watching police confiscate boxes of fireworks from one of the homes there. At some point in the afternoon, officers told her to evacuate.

Told she couldn’t take her car off the block, Quintanilla strapped her son into a stroller and took her kids to get Chinese food. When they returned, they sat inside the 24-hour laundromat — across the street from Rodriguez Martinez’s salon — to wait along with 20 to 30 others for the police to finish.

Then, suddenly, there was a huge burst of flames outside. She felt a wave of air hit her, her ears began ringing and she could see smoke and broken glass from the laundromat’s front windows.

“Están bien todos?” a worker asked. Is everyone OK?

To this day, Quintanilla can’t shake the look of shock the blast left on her 18-month-old’s face.

“That image is so hard to erase,” she said from the hotel, tears trickling down her face.

When her older kids ask her what they should tell their friends when they go back to school — about what their summer was like, or even where they live — she doesn’t know what to say, she said.

She said she received a $10,000 check from the city on Friday, but has so many questions for police and city officials herself — such as how could they have made such a big mistake, and when will her family be allowed to return home.

“We don’t have a home. We can’t call this home,” she said of the hotel.