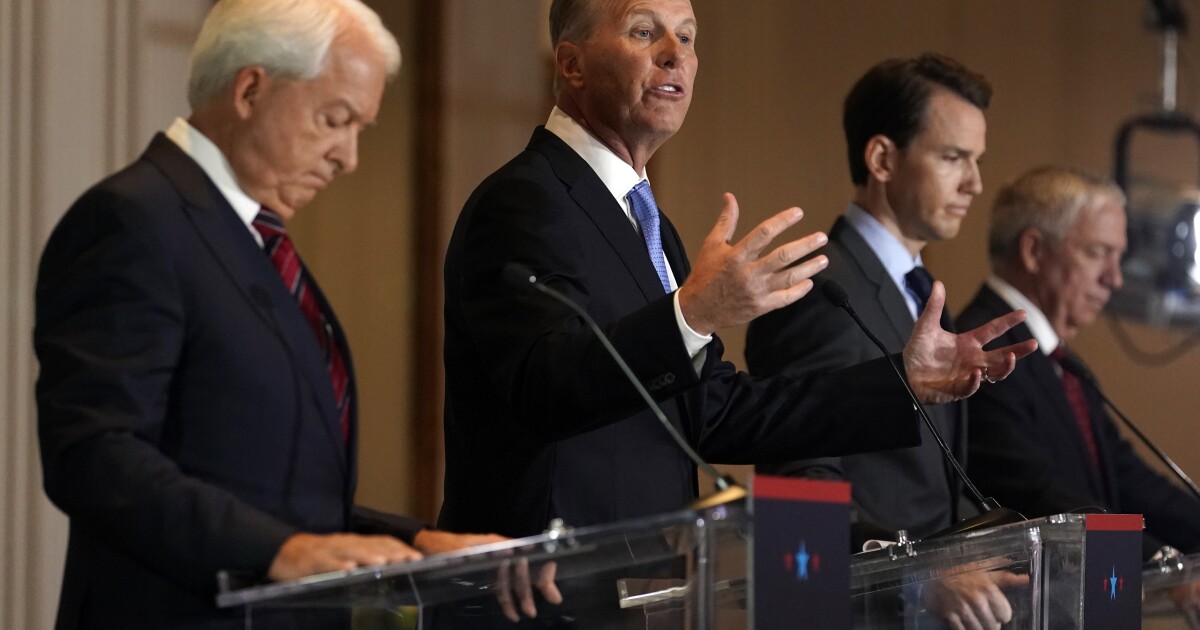 The California Republican Party overwhelmingly voted Saturday not to endorse a candidate in the recall race to replace Gov. Gavin Newsom, a move framed as an effort to preserve party unity but viewed by skeptics as an effort to protect an establishment favorite and the changing dynamics of the race.

Party chairwoman Jessica Millan Patterson, who once wanted the party to endorse but came out in favor of no endorsement on Saturday, said the decision allows the party to focus its volunteers and resources on the first question on the Sept. 14 ballot — do voters want to oust Newsom.

“It puts us in a great position and points to the strength of the candidates in this race,” she said. “We can get out there and continue to focus on what we’ve been focusing on — replacing the worst governor in state history.”

But others argued that the process had been engineered by the party’s leadership to favor former San Diego Mayor Kevin Faulconer, but when he couldn’t capitalize on the effort, the party reversed course and pushed the no endorsement vote to avoid an embarrassment for Faulconer’s campaign.

Former Rep. Doug Ose, who is also running to replace Newson, pointed to an email Faulconer sent after 11 p.m. Friday to party delegates urging them to not endorse anyone.

“What I think happened … is that Kevin Faulconer thought he had it locked up and all the sudden he collapsed. All the people who have lined up with him said, ‘Oh, we can’t have that outcome,’” Ose said, noting that he had urged party leaders not to create an endorsement process because it would require candidates to spend time qualifying for the process. “It was a total waste of time.”

While a large majority of California voters oppose recalling Newson in the Sept. 14 election, the most energetic voters are closely divided over whether the incumbent should be ousted from office. This recent development has turned greater attention to the second question on the ballot: regardless of whether one supports recalling Newsom, if he is kicked out of office, who should replace him.

The Republican Party has become a nonentity in statewide races — the last time a Republican was elected statewide was in 2016. But the September election may offer the party the best chance since then. If Newsom is recalled, the candidate who receives the most votes automatically will become the new governor, regardless of how few votes he or she receives.

Forty-six candidates are on the replacement ballot, including 24 Republicans.

The state party’s executive committee voted in late July to create an endorsement process for the recall. Delegates gathered virtually, and a candidate would need the support of 60% of the delegates in virtual attendance or who submitted proxy votes on Saturday to win the party backing.

A spokesman for Faulconer’s team, which initially vocally supported the party endorsing a candidate and sent delegates a blizzard of mailers seeking their backing, said they changed their minds after no prominent Democrat filed to run in the race, negating the need for Republicans to coalesce behind one candidate.

“As our campaign stated weeks ago, we support the decision to not endorse a candidate. Since no Democrat filed for question two, the California Republican Party’s sole focus should be ensuring that we defeat Newsom by passing question one,” said spokesman John Burke.

There was another development in recent weeks that shifted the dynamic of the race. Elder entered the contest in mid-July, immediately leading the polls and raising an enormous amount of money.

His popularity was evident in the endorsement competition. To be eligible to be considered for a party nod, candidates needed to collect the signatures of at least 200 delegates. Elder had the signatures of 499, Kiley had 386, Faulconer had 340 and Ose had 255. (Businessman John Cox, the 2018 gubernatorial nominee, collected about 160, falling short to be up for consideration.)

“Larry Elder became a late factor that wasn’t part of the plan. I think there was an effort to create this process to help Faulconer, and I think Faulconer abandoned that a couple weeks ago,” said Rob Stutzman, a GOP strategist who advised Gov. Arnold Schwarzenegger’s successful 2003 recall campaign and is not aligned with a candidate in the current race.

Stutzman added that he thinks some members may be reluctant to have the party back Elder, given that he hasn’t been fully vetted.

“I think plenty of delegates have some apprehension about putting the party imprimatur on a candidate with a lot of unknown variables in the weeks going forward,” he said.

Suspect arrested in killing of prominent Bank of America executive

L.A. County libraries could go fine-free if proposal is approved