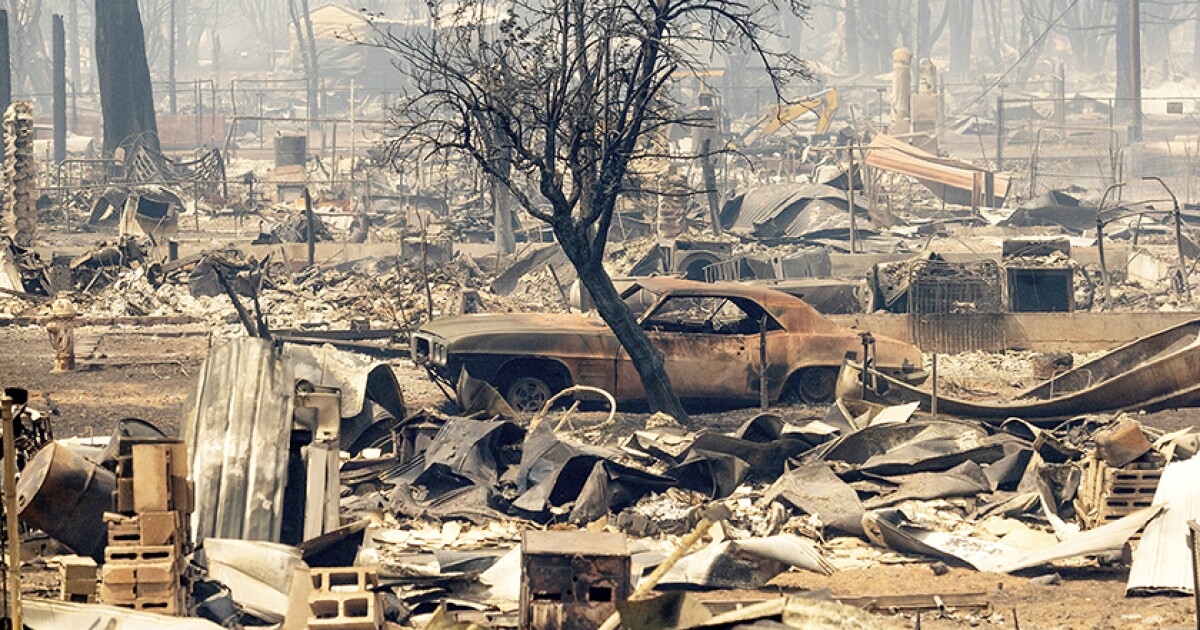 The Dixie fire is now the second-largest wildfire in California history, burning more than 463,000 acres through a large swath of Northern California and destroying over 400 homes and commercial buildings as firefighters struggled to get the upper hand on Sunday.

Cooler weather was slowing the spread of the fire this weekend, but it remained a dangerous monster, and thousands of residents of small mountain communities remained evacuated.

The wildfire is burning in Plumas, Butte, Lassen and Tehama counties.

“We basically have a blanket of smoke covering the fire area, which is shielding us from direct sunlight,” said Edwin Zuniga, a public information officer on the fire.

Although the smoke resulted in dismal air quality across the region, it was helping to suppress fire activity by keeping temperatures down, humidity slightly higher and wind speeds a bit lower.

The fire ignited July 13 near a Pacific Gas and Electric Co. power station in Feather River Canyon and might have been caused by a Douglas fir falling on a power line, PG&E said. The utility has said its equipment may also be to blame for sparking the Fly fire, which started nine days later and eventually merged with the Dixie fire, as well as a separate wildfire in Magalia that was extinguished July 14 at a quarter of an acre.

Despite the improved weather conditions, crews fighting the Dixie fire remained vigilant Saturday. Given the fire’s size and the historically dry conditions — exacerbated by temperatures rising as a result of human-caused climate change — fire officials feared that embers could at any time cross containment lines and ignite spot fires that would then race toward populated areas. That scenario played out Wednesday night when the fire destroyed the community of Greenville more than three weeks after it began.

At the same time, the smoke was compromising visibility, limiting the use of firefighting aircraft, authorities said.

“It’s definitely a trade-off,” said Rick Carhart, public information officer with the California Department of Forestry and Fire Protection. “When we have clearer air, the aircraft can fly and do their work, but we also have the possibility of these more extreme fire conditions.”

The fire was burning through all kinds of terrain — steep, thickly timbered areas as well as flatter brush and grasslands — with its sheer size posing logistical hurdles. The fire on Friday surpassed the Bootleg fire in Oregon to become the largest in the United States this year.

“Just trying to make the plans and get everybody to the right places, it’s a huge job,” Carhart said of firefighting logistics. “I would say that’s the challenge right now, is taking this huge fire and breaking it up into pieces and getting it under control as best we can.”

Time was of the essence, as the favorable weather conditions weren’t expected to last long. A warming trend was forecast to start early in the week, with temperatures pushing above normal by the week’s end, Rowe said.

“It is going to get hot, and it’s going to get sunny, and the wind is going to blow. … That’s just life in Northern California,” Carhart said. “So while we have this favorable weather, we’re going to take advantage of it and do everything we can to get as far ahead of the game as we can before the weather turns on us again.”

Four firefighters were injured when a tree branch fell on them about 1:30 a.m. Saturday, according to officials. Three were treated and released, and one remained hospitalized in stable condition.