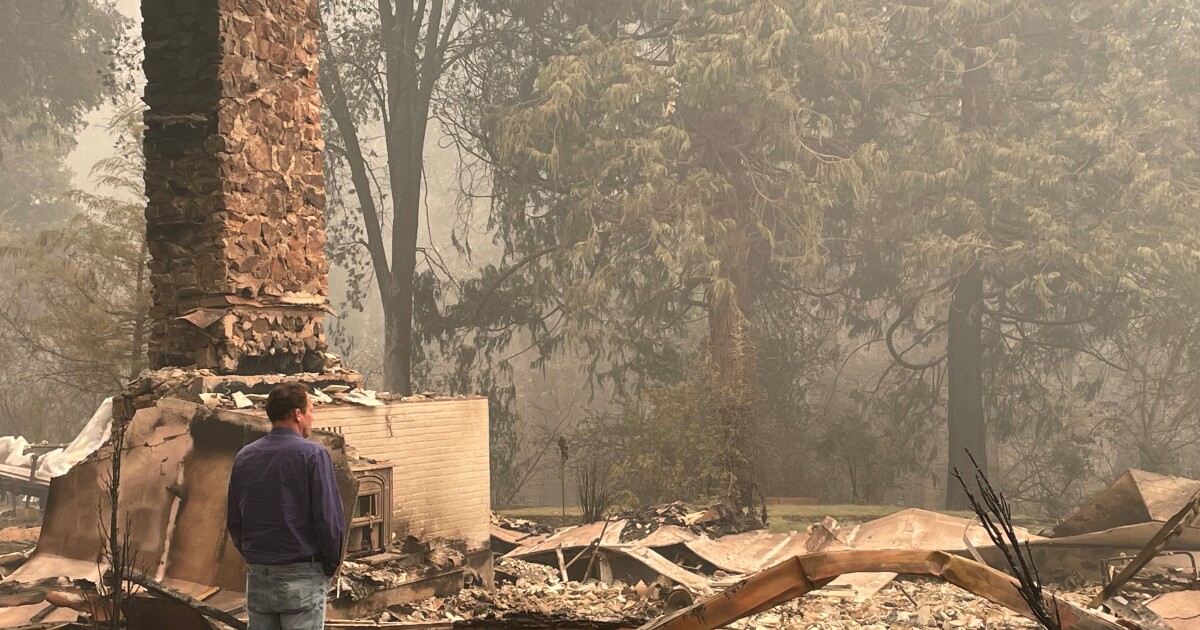 The road home for Kevin Goss was painful and full of no good news.

A Plumas County supervisor and pharmacy owner, Goss represents an area hit hardest by the Dixie fire, one he hadn’t seen since evacuating from Greenville days ago.

Friday, he got his chance.

At the first checkpoint, Goss met a state trooper who was on duty while his own home in Colfax was under evacuation orders. Farther up the road, where Goss had to travel behind a pilot vehicle because the retaining wall of the bridge was still on fire, he came across Plumas County Sheriff Todd Johns coming down from the mountain.

Goss had been friends with Johns for years, and he got out of the car to touch base with the sheriff.

Both men were stoic but stunned by the losses surrounding them. A few miles farther, Goss came across another close friend, a state trooper whose home lay in ashes less than half a mile from where he was on duty.

The men traded news on where the fire was moving, relentlessly closer to Goss’ home deeper in the valley. Goss turned on a back road leading into Greenville to check on friends’ homes.

At site after site, the homes where he had gathered with friends and family had been reduced to nothing more than molten steel and heaps of ruin. The Hideaway Motel and Lodge, which his parents had owned when they first moved here in the 1970s, was nearly completely incinerated, except for its giant stone fireplace. This is the place where Goss remembered being snowed in one New Year’s when he was 5, when the entire town came on snowmobiles to celebrate the holiday.

It was a good place to grow up, he said.

Farther down, there were some signs that not everything had burned. A brown-sided home that belonged to his former brother-in-law was unscathed, its satellite dish still pointing toward the sky. Nearby, two chickens pecked at crab apples that had fallen off a tree. Deer that had survived the blaze were roaming yards where sprinklers had kept grass green.

The road was so filled with smoke that it required headlights in the middle of the day.

Slowly, though, Goss was edging closer to what he really wanted to survey.

It was the oldest building in town, built in 1860. His pharmacy.

“The emotional part is going to come here in a minute, a minute and a half,” he said.

When it finally came into sight, there was little but shock on his face.

Standing above the ruin, Goss gave a short and mirthless laugh. “I didn’t even know there were bricks inside some of these walls,” he said, looking at their remains in the rubble. “That’s funny.”

Pointing to blackened steel and plaster, he said, “here’s where we kept all the pills.”

At the back edge of the building was a pile of twisted plastic with the remains of an old child’s fire truck. It had been a toy he played with when he was a child. Its metal hull was now black, its red paint gone.

“You think you are prepared for it, but I guarantee you, you are not,” he told an NBC news crew.

Goss had last been at the pharmacy the night of the fire with his son. Spot fires were everywhere, and he knew it was only a matter of time before the town burned.

With the sheriff, he went to a friend’s house to grab some belongings for her. Everywhere he went, he told people, “Get the heck out of here. It’s coming.”

After 20 years of fighting for new roads, the town had finally had its entire downtown revamped as part of a $15-million project four years ago. Elegant black light posts with bell shades and LED lights were installed, most now twisted and bent like wilted flowers.

Before his return to Greenville, Goss had stopped by the pharmacy in downtown Quincy, where he picked up prescriptions for people he knew who had remained behind.

Before evacuating, Goss had managed to grab his pharmacy’s computer, which contained information on all the prescriptions he had filled.

In Quincy, those prescriptions were filled by the woman who had planned to buy his Greenville pharmacy, before the Dixie fire turned it to ash.