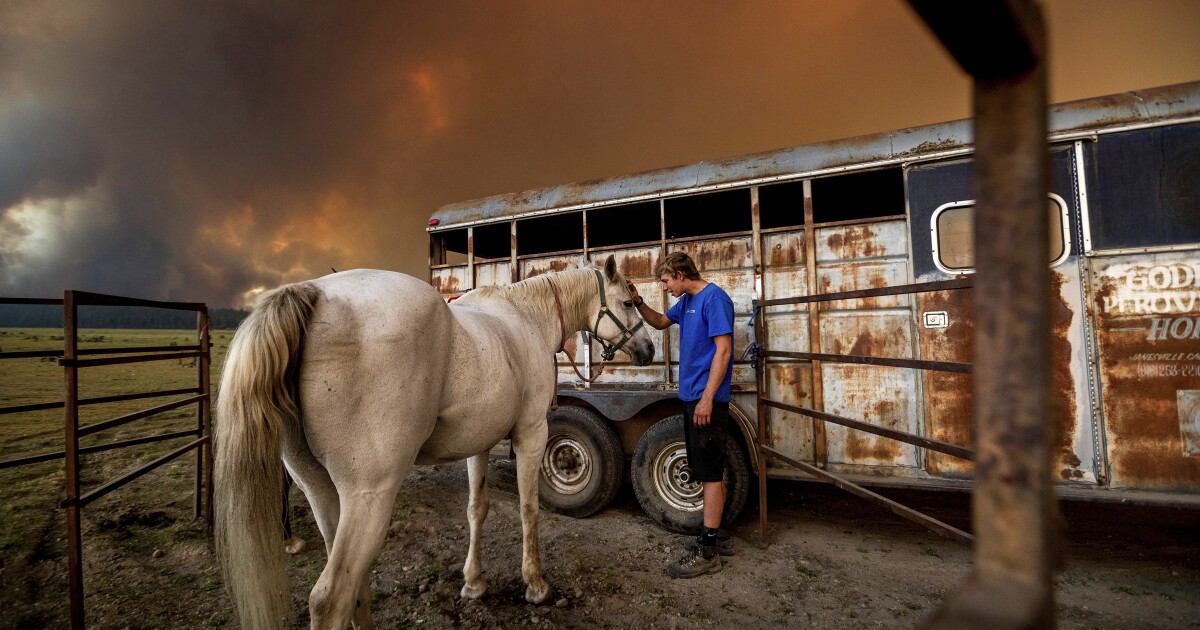 The massive Dixie fire, which has been burning in Northern California for three weeks, is shooting embers into critically dry fuels and igniting new blazes.

By Wednesday morning, the fire burning in Butte and Plumas counties had exploded to 274,139 acres, making it the eighth-largest wildfire in California’s recorded history, according to the California Department of Forestry and Fire Protection. It is 35% contained.

At least 45 structures have been destroyed, with more than 12,000 under threat, according to the latest incident report. New evacuation orders were issued on Tuesday, sending more people fleeing.

The Dixie fire broke out three weeks ago near a power station in Feather River Canyon. Pacific Gas & Electric said in a report that its equipment might have sparked the blaze.

A red flag warning went into effect at 1 p.m. Wednesday for the fire area and much of the region, when a cold, dry front is expected to pass through, according to Ryan Walbrun, incident meteorologist for the Dixie fire. The warning will last through 8 p.m. Thursday.

“It’s going to set up a critical fire weather pattern,” Walbrun said during an incident update on Tuesday evening.

Wind gusts are expected to hit 30 to 40 miles per hour, “pushing up on the fire itself,” Walbrun said. Those winds will meet single-digit humidity levels, considered critically dry for the area, and temperatures in the 80s and 90s.

Citing a description by a fire behavior analyst, Dixie fire incident spokesperson Capt. Mitch Matlow said the fire danger on Wednesday was at a maximum.

The fire surged overnight amid unusually low humidity. Given the new set of conditions, “today could be even worse,” said Matlow, a spokesperson for the fire’s west zone.

A pocket of unburned fuels along the northern end of the fire ignited on Monday, according to Mike Wink, operations section chief for Cal Fire’s Incident Management Team 1, also focused on the west zone.

A cocktail of smoke and wind pushed the blaze beyond containment lines, and firefighters have been working to beat it back since then, he said Tuesday evening.

Despite efforts to cut down vegetation and dump roughly 230,000 gallons of fire retardant along Humboldt Road, “it got outside of all those things, it got up in these hills, and we’ve been going after it,” Wink said.

There was also increased fire activity between Prattville and Lake Almanor West, and firefighters are actively protecting structures in those communities, as well as Chester and a peninsula in Lake Almanor, according to Matlow.

Officials at the recent incident update struck a somber tone.

“I just want to recognize that for some people, we’re seeing some light at the end of the tunnel, and others are seeing maybe not so much light there,” said Chris Carlton, supervisor for the Plumas National Forest.

Because there are many evacuation orders that are subject to change, Matlow advised residents to monitor social media and their county’s website for the latest information.

The lightning-sparked McFarland fire is burning aggressively through Shasta and Trinity counties, to the west of the Dixie fire.

As of Wednesday, it had burned through more than 20,000 acres and was 5% contained, according to an incident report updated Wednesday

Drought-stricken fuels are similarly feeding the blaze, which “has the potential to continue dangerous rates of spread,” the incident report said.

Conditions plaguing the Dixie fire and other wildfires in the state are part of a broader regional trend.

Much of the Western U.S. has seen extreme heat and drought due to the worsening climate crisis, which dries vegetation that serves as receptive tinder.

So far this year, 96 large fires have burned 1,883,541 acres in 14 states, according to the National Interagency Fire Center.

California water restrictions amid drought: How bad is it?