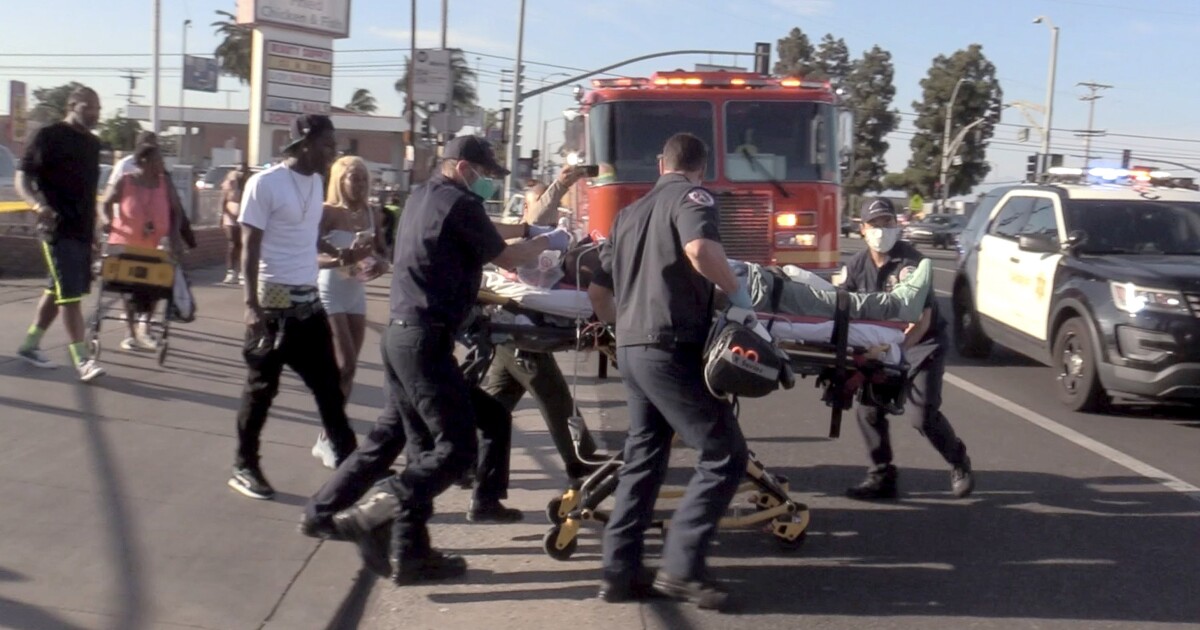 A man was killed and a woman injured in South Los Angeles on Thursday evening in a pair of shootings that might have been related, authorities said.

At 5:45 p.m., deputies from the Los Angeles County Sheriff’s Department’s South Los Angeles station responded to a report of a shooting in a strip mall at the intersection of Vermont Avenue and Imperial Highway, Lt. Derrick Alfred said.

Inside a business at the strip mall, the deputies found a 26-year-old man who had been shot multiple times, Alfred said. He was taken to a hospital, where he was pronounced dead.

Based on witness accounts and a preliminary review of surveillance footage, it appeared that, prior to the shooting, a four-door, light-colored sedan had pulled up to the curb along Vermont, Alfred said. Two men stepped out, and one or both opened fire on the victim, who was standing behind a Chevrolet Tahoe parked in the strip mall’s lot.

The men ran back to the car, which drove south on Vermont, Alfred said. The victim ran into the business, where he was found by the deputies.

A few minutes earlier, a woman had been shot about half a mile away in what detectives believe was a related attack, based on the timing of the two incidents and similar descriptions of the suspects’ car, Alfred said.

The 20-year-old woman was sitting in the passenger seat of a car near the intersection of 119th Street and Budlong Avenue when someone in the vehicle behind her began shooting into her car, the lieutenant said. The woman was shot in the leg. The man driving the car took her to a hospital in Gardena, where she was treated and released Thursday night, Alfred said.

Detectives had no suspect descriptions as of Thursday night.

The strip mall where the man was killed includes a Louisiana Fried Fish, an insurance agency, a nail salon, a donut shop, a barber and a liquor store. Towering over the lot is a billboard offering a $50,000 reward for the clue that solves the killing of Akeem “AJ” Coburn, a 30-year-old Los Angeles Department of Water and Power employee who was shot to death a year earlier to the day, about a mile south on Vermont.

Next to a picture of his smiling face are the words: “Who murdered AJ Coburn?”