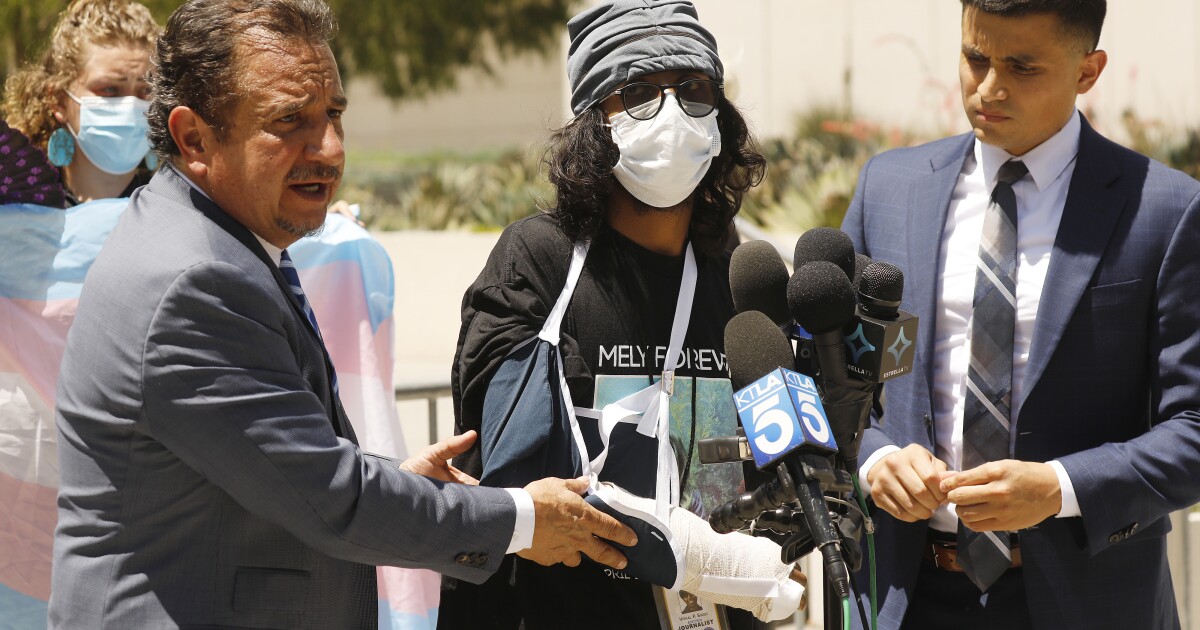 During a meeting of the civilian Police Commission, Moore said 41 arrests were made — 40 failure to disperse after an unlawful assembly was declared and one for possession of illegal or prohibited items at a protest. He said officers recorded firing projectiles 10 times and striking people with batons nine times.

Several protesters alleged they were injured by police when they posed no threat. While Moore said that officials would investigate allegations of misconduct, he emphasized that videos being posted on social media only showed certain perspectives and alleged that activists were “essentially shopping clips and snippets” online that distort facts.

Saturday morning’s confrontation between left-wing and far-right-wing groups, the second this month outside the Wilshire Boulevard Wi Spa, was triggered by a viral video in which a woman at the spa complained about seeing a customer with a penis in an area that is reserved for women. The footage was quickly amplified by an international network of right-wing activists, pundits and media outlets.

LAPD Deputy Chief Al Labrada has told The Times that people on both sides were armed with weapons, including knives and bats, and that officials stationed themselves between the protest groups to prevent violence. An unlawful assembly — announced via bullhorns and text alerts to residents in the area — was declared at 11:07 a.m.

Moore said that body-camera footage from officers running down the street with 40-millimeter projectiles showed that they had fired at protesters running toward them with items to throw at officers.

He said that an officer who shot a woman with a beanbag round at close range was aiming at another protester behind her who was about to throw a bottle. The chief said police had not yet spoken to the woman who was shot but wanted to as part of their review of the incident.

Moore said some of the baton strikes came after protesters had attempted to take batons out of officers’ hands, and the officers “used those baton strikes to repel and have the individuals retreat and release the baton.”

But many protesters from the left-wing group have accused LAPD officers of engaging in excessive force and violating a court order that restricts the department’s use of projectiles. Labrada, who oversaw the police response, declined to comment on specific allegations until officials finish reviewing body-camera footage from the approximately 160 officers at the scene.

The outrage is the latest since the mass demonstrations that followed the killing of George Floyd by Minneapolis police in spring 2020. Those events, which drew tens of thousands of people into the streets, resulted in a wave of lawsuits against the city of L.A., including a large class-action lawsuit filed by Black Lives Matter Los Angeles and other activists that accused the LAPD of seriously injuring protesters through excessive force, including the use of projectile weapons and batons.

In May, a federal judge granted a preliminary injunction in the case that restricts the use of 40-millimeter weapons to trained officers, and says they may use them only on specific targets “when the officer reasonably believes that a suspect is violently resisting arrest or poses an immediate threat of violence or physical harm.”

It forbids officers from aiming 40-millimeter projectiles at people’s heads, necks, faces, eyes, kidneys, chests, groins or spines, and says they should only be fired from five feet or more “unless an officer or other person is attacked and there is a threat of imminent serious harm.”

Carol Sobel, an attorney for Black Lives Matter-Los Angeles, said the organization’s legal team has been reviewing videos from the weekend’s events and would like the court to expand the injunction to include bean bag rounds, which were used Saturday.

Sobel said videos she has seen, including of the woman being shot with a bean bag round at close range and of officers firing 40-millimeter rounds while running down the street, were extremely troubling and showed “the indiscriminate use of these weapons.”

L.A.-based attorney Christian Contreras filed a claim Tuesday against the city that names two individuals as class representatives and alleges that officers used excessive force against protesters. He said more than a dozen protesters have contacted him.

Following a news conference led by Contreras in front of the LAPD’s downtown headquarters Tuesday, Jessica Woodward, one of the claimants, told The Times that she had been standing on the sidewalk and attempting to put herself between a protester and an officer when she was struck by a baton.

After getting up, two officers hit her in the chest with a baton again, said Woodward, 28.

A regular at protests against police violence, Woodward said she had been wearing a bulletproof vest on Saturday.

“My primary goal in a protest is to stand between police and BIPOC so that they are not attacked,” she said.

The claim also alleges unlawful force against documentary filmmaker Vishal Singh. Singh, 28, has told The Times he was standing in the middle of Coronado Street filming the protest when an officer began pushing him backward with a baton, telling him repeatedly to get onto the sidewalk.

Video shows Singh, wearing a white T-shirt and a black helmet, rapidly walking backward and filming. Singh stepped behind a parked car and onto the sidewalk to film officers he said were swinging batons at protesters. He said an officer leaned around the back of the parked car and, with “both hands on his baton like it was a baseball bat,” swung at his right arm, fracturing a joint in his hand and two of his fingers.

“It was hard to see any valid reason for that incident,” Singh said. “I was backing away. I had my credentials on. I was filming.”

The Pirate Bay Is Back – This Time With A Coin!