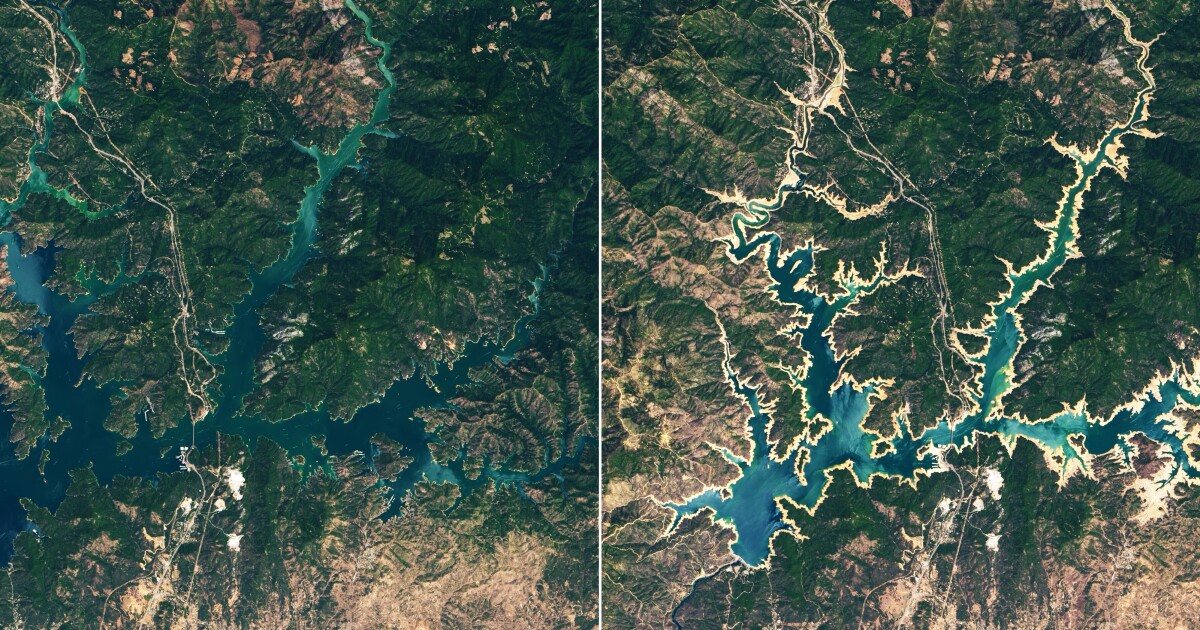 As the West descends deeper into drought, climate and water experts are growing increasingly alarmed by California’s severely shriveling reservoirs.

On Monday, Shasta Lake — the largest reservoir in the state — held a scant 1.57 million acre-feet of water, according to the U.S. Bureau of Reclamation, or about 35% of its capacity.

A series of satellite images captured by NASA show just how dramatically the water level has fallen.

One image from July 2019 shows a fuller Shasta Lake surrounded by green banks. This year, that greenness has been replaced by a tan “bathtub ring” lining the lake bed, indicating the degree to which water has fallen.

A similar pattern can be seen in images of Lake Oroville, the state’s second-largest reservoir — which also has experienced a precipitous drop in its reserves — and in the Sierra, which have seen a diminishing snowpack this year.

Jeffrey Mount, senior fellow at the Public Policy Institute of California’s Water Policy Center, said “everybody should be concerned” by what they’re seeing.

“The reservoir levels we’re looking at are near-record low, with all the prospects that they will actually be record low by the end of the summer,” he said. “The mountains are dried out. The sponge is completely dry.”

The satellite images are stark, and their ramifications run deep, experts said — from dead lawns and fallow fields to ecological peril and worsening wildfires. Some said they probably represent a new normal for a Golden State gone brown.

Many scientists studying California’s drought point to 1976-77 as a “worst-case scenario” benchmark. That drought brought Lake Oroville to its all-time record low of 646 feet above sea level.

On Monday, the lake sat just over 661 feet above sea level, or 28% of its total capacity, according to the California Department of Water Resources.

As with Lake Shasta, the satellite images of Oroville in 2019 show a lake with a lot more water than in 2021. And at eye level today, houseboats now sit on cinder blocks because there is not enough water to hold them.

Yarbrough said California typically receives the majority of its annual precipitation between early December and the end of March, so the situation is unlikely to improve for several months, if not longer.

“This lack of stored water as a result of the West-wide drought has multiple cascading impacts,” he said, “including dramatically less water for our farms and communities, more stress on our electricity grid and increased wildfire risk.”

Already, farmers in the state have faced such dry conditions that many have begun fallowing fields, pulling out vines and trees, and leaving empty land that once flourished.

Though the ‘76-77 drought was record-setting, there are several key differences that make today more challenging than even that era, said Forrest Melton, program scientist at the NASA Western Water Applications Office.

In 1977, California was cooler than it is now, Melton said, and the state was home to about 15 million fewer people. Warming temperatures and a growing population have only driven up use of resources and the demand for reliable water.

“Increasingly, our dry years are also hot years,” Melton said, and “the increase in population in California adds to the challenge for water resource managers, who have to respond to both drought-related reductions to water supplies and continuing growth in demand for water.”

What’s more, all but a handful of the last 20 years have seen below average precipitation, researchers said.

The most recent rain year, which ended in June, was the seventh driest in Los Angeles’ 144 years of records, according to Golden Gate Weather Services, and the third driest on record in the Northern Sierra region.

“We’re not just moving back and forth between wet years and dry years, but the number of dry years is really increasing,” said Mount of the Public Policy Institute of California. “And the wet years are getting few and far between.”

In fact, the snowpack in the Sierra is nearly nonexistent today, satellite images show.

Images from 2019 show the mountain range dusted in snow — even in July — while images from this year are marked primarily by varying shades of brown.

In a post about the images, NASA Earth Observatory Managing Editor Michael Carlowicz said it’s cause for concern because snow that falls onto the Sierra Nevada and other ranges becomes a “natural reservoir that slowly melts each spring and summer and flows down into the river valleys,” and many of the state’s resource managers rely on this to fill reservoirs.

But officials in March warned that already low snowpack levels were dwindling, predicating a critically dry year for the state. By June, the Department of Water Resources found that the statewide snowpack was at a grim 0.1 of an inch, or 0% of normal.

NASA also captured the regression in a series of images from March, May and July of this year, in which the snow all but disappears from the Sierra.

“Soil conditions were so dry this spring,” Yarbrough said, “that much of the snowmelt, critical to filling our reservoirs for the summer months, was absorbed before it ever reached its usual streams and tributaries.”

That snowmelt and water supplies can’t reach tributaries isn’t just a concern for California’s residents: It’s also a huge problem for the state’s ecology and some of its most threatened species.

Historically low river levels are impeding salmon from making their regular runs, and California officials are now planning to truck millions of young fish to the Pacific Ocean instead.

The winter-run Chinook population already has declined substantially, but the state’s Water Board said it had to choose between preserving limited supplies in Lake Shasta for the fish, or drawing it down for Central Valley irrigation.

The board attributed the decision to “extremely dry conditions and the significant reduction in expected Shasta inflows this year,” but also acknowledged that it could “increase the [Chinook’s] risk of extinction significantly.”

“This will be a benchmark horrible year for salmon,” Mount said. “It’s going to be a near-complete wipeout for at least two runs.”

If that happens, it will be calamitous not only for the fish, but also for the people who harvest them.

What’s more, the recent Pacific Northwest heat wave, which is believed to have killed more than a hundred people, also killed an estimated 1 billion sea creatures, according to recent data.

But it’s not just an oceanic issue: As heat wave conditions meet the ongoing drought, more and more wildfires are primed to ignite.

Already, more than 5,000 fires have seared through more than 140,000 acres of the state’s parched, sun-baked vegetation, the California Department of Forestry and Fire Protection said.

Last week, the Sugar fire in Plumas National Forest became the state’s first 100,000-acre mega-fire of the year, in large part because of the drought.

“Primarily it’s the dry fuels that we have, and the low humidities, that are really creating these fires,” Sugar fire incident spokeswoman Phyllis Ashmead said last week. “And it’s not just here, it’s in many areas. It’s the same conditions throughout California.”

The drought conditions have grown so worrisome that Gov. Gavin Newsom this month asked Californians to voluntarily cut back on water consumption by 15%.

It’s a choice many Californians will probably soon have to make as water becomes more scarce.

The governor also issued a regional drought state of emergency in 50 California counties, or roughly 42% of the state’s population.

Southern California is not included, for now — thanks in large part to some strategic investing and planning. But further restrictions are possible as reservoirs keep shrinking, experts said, with little to no rain in sight.

Coyote that charged at kids in San Francisco park is killed

Runaway animals are as L.A. as car chases. Here's why they make headlines