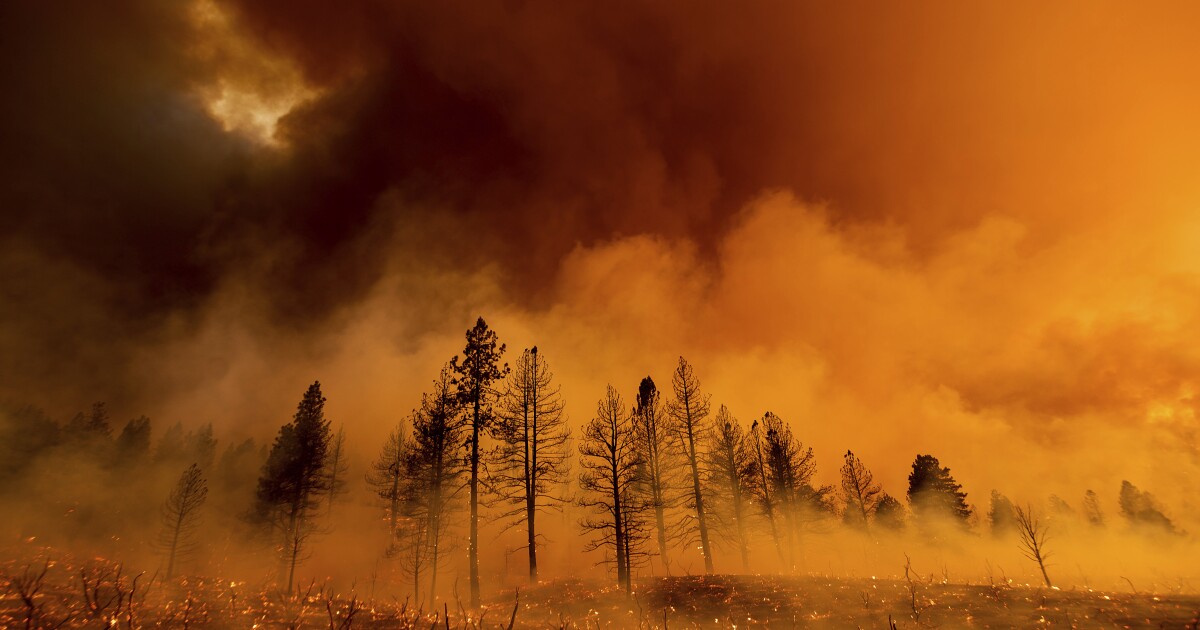 Fueled by a trifecta of dangerous weather conditions — strong winds, low humidity and high temperatures — a series of wildfires, including a so-called megafire that has already charred more than 100,000 acres, continue to burn huge swaths of drought-dried vegetation in Northern California.

In Plumas County, the massive Sugar fire, the first 100,000-acre fire in California this year, had burned more than 105,000 acres by Sunday night and was 82% contained, officials said.

The blaze, which at one point grew with such speed that its cloud of smoke, ash and heat generated its own lightning, continues to chew through dry chaparral and pine trees, aided by gusting winds and temperatures projected to peak in the low 90s on Sunday. It was one of two lightning-sparked forest fires that together make up the Beckwourth Complex fires.

During a recent briefing, U.S. Forest Service Operations Section Chief Jake Cagle said the 100,000-acre milestone is no longer uncommon in California, which experienced a record wildfire season in 2020 and is already outpacing those numbers this year.

“These are the new norms now,” Cagle said. “We used to say ‘unprecedented and historic.’ We’re past that now.”

Climate experts have said that vegetation in Northern California is at record dry levels for this time of year, fueling blazes that are burning faster and hotter than firefighters expect to see this early in the fire season.

Another fire burning south of Lake Tahoe near the California-Nevada border has grown to more than 18,000 acres, according to the U.S. Forest Service. Dubbed the Tamarack fire, the blaze, which was ignited by lightning July 4, remains 0% contained and has forced evacuations in and around the small mountain town of Markleeville.

The Death Ride, a 103-mile bike ride that starts and ends in Markleevlle, was canceled Saturday.

In Butte County, the Dixie fire, which began burning Wednesday, had charred more than 18,000 acres by Sunday night. The blaze is burning along remote, steep terrain and is only 15% contained, according to the California Department of Forestry and Fire Protection. As of Sunday morning, Caltrans had closed part of State Route 70 near its junction with State Route 191.

A fourth fire — this one burning near Yosemite National Park and dubbed the River fire — started a week ago and has spread over more than 9,600 acres, destroying 12 structures and damaging two more, officials said. The fire is now 86% contained.

And along a rural stretch of southern Oregon just north of the California state line, the Bootleg fire, the largest wildfire burning in the nation, had covered more than 298,000 acres by Sunday night. The gigantic fire, which at one point threatened to derail California’s power grid, is now 22% contained.

In Southern California, the National Weather Service’s Oxnard office issued a red-flag warning for Sunday into Monday morning for Santa Barbara and San Luis Obispo counties, as well as in the mountains in Ventura County, warning that lightning from monsoonal thunderstorms could create an increased fire risk.

Gusty, erratic winds are expected in the area, officials said, as well as the possibility of dry lightning. In the rest of Ventura County and Los Angeles County, officials said, wet showers were expected, including brief, heavy downpours.