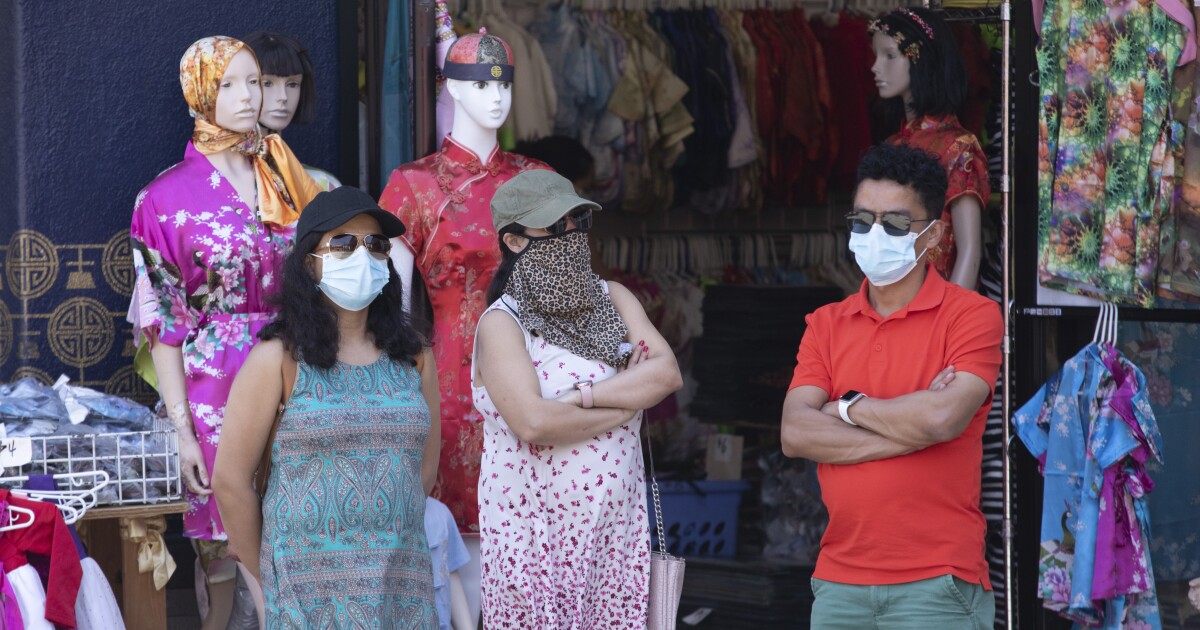 L.A. County is by far the biggest jurisdiction in the nation to require masks again. But with coronavirus cases rising across the nation largely because of the highly infectious Delta variant, officials elsewhere will be watching to see if the effort works.

A big question is whether people will actually follow the rules — especially amid the growing frustration of those who got their vaccinations to help bring about a return to pre-pandemic life — and what, if anything, health officials will do if this action does not slow the rise in coronavirus cases.

Under L.A. County’s order, masks will be required to be worn in all indoor public settings, such as theaters, stores, gyms, offices and workplaces, and in restaurants when not eating and drinking. Those exempted include children younger than 2. Indoor dining is still allowed, but patrons are asked to wear masks when they are not eating or drinking.

Other California counties have urged people to wear masks indoors, but none have followed L.A. and mandated the practice.

The vaccines are extraordinarily protective against severe disease and death. Between Dec. 7 and June 7, unvaccinated people in L.A. County accounted for 99.6% of its coronavirus cases, 98.7% of COVID-19 hospitalizations and 99.8% of deaths.

But officials are asking the vaccinated to wear masks indoors as a way of also forcing unvaccinated people — who are at greatest risk — to do the same. About 52% of L.A. County residents are fully vaccinated, and roughly 60% have had at least one shot. But given the region’s enormous population, that still leaves millions vulnerable.

Israel dropped most mask orders on June 15, the same day California did, but reimposed mandatory mask requirements in indoor public spaces on June 25, reacting to rising infection rates. But the mask rule is not well followed there, and Israeli officials have instructed police to issue fines to people violating the rule, according to the Associated Press.

In France, authorities have ordered mandatory vaccinations for health workers and “COVID-19 passes” for anyone wanting to go to a restaurant, mall or on a train or plane, or inside the recently reopened Eiffel Tower. To get a pass, people must prove they’re fully vaccinated, recently recovered from the virus, or have taken a fresh negative test, the AP reported.

Chin-Hong said he’d heard from other people who found the call for vaccinated people to resume wearing masks a psychological blow, as they had hoped COVID-19 was behind them.

Dr. Robert Kim-Farley, medical epidemiologist and infectious diseases expert at the UCLA Fielding School of Public Health, said he did not expect local officials to restrict business capacity or reimpose physical distancing measures except as a strategy of last resort.

“I do not anticipate we would have to go to those more extreme measures,” Kim-Farley said.

He said he also didn’t expect the hospital system to be as strained as it was earlier in the pandemic, “because of the fact that the vast majority of those who are elderly, and at greatest risk of severe disease and death, have been vaccinated.”

Younger people who are coming down with disease will not have the same high rates of severe illness and death.

Kim-Farley expects that mask requirements will be rescinded for vaccinated people once transmission rates return to lower levels.

Eventually, when everyone is eligible for and has the opportunity to get vaccinated, including those under the age of 12, then “I think that’s when the tables will begin to turn, and people will be saying, ’All right … we’ve talked to you about the importance of vaccination, and you’re still refusing vaccination. That is your right. But then you have to accept all the responsibility of a bad outcome if you came down with disease.”

Previous mask ordinances have been largely enforced through the honor system, with authorities saying they didn’t intend to cite people.

Los Angeles’ mask order goes further than federal or state recommendations, but officials at those levels have said it is up to local agencies to determine what is best for their areas.

Some have questioned whether L.A. has gone too far. Others say it could have unintended consequences.

Dr. Monica Gandhi, an infectious disease specialist at UC San Francisco, said it could be a reasonable policy to require masks when more than five people were hospitalized for COVID-19 for every 100,000 residents. L.A. County is fast approaching that threshold, now reporting 4.6 hospitalizations for every 100,000 residents; a month ago, it was 2.2.

But Gandhi added that the federal and statewide approach not to require masks for vaccinated people was sound and demonstrated to vaccine-hesitant people the benefits they could enjoy after getting their shots.

She said she was concerned that taking away the freedom for vaccinated people to be maskless could further discourage those already reluctant to get their shots.