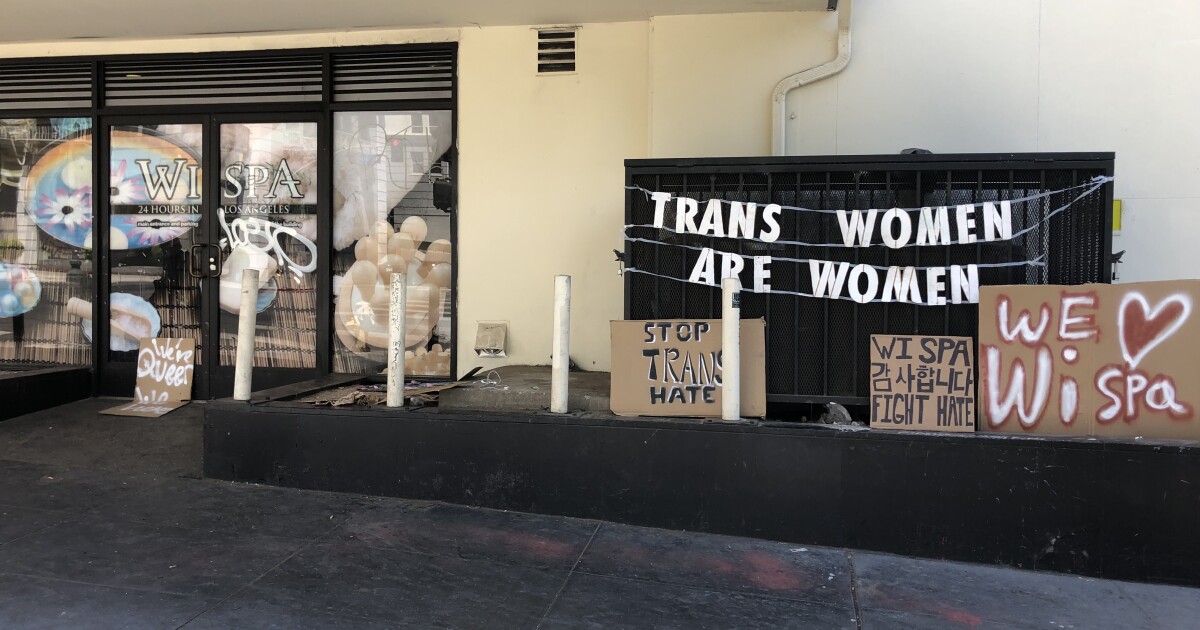 Dueling protests outside a Koreatown spa over transgender rights Saturday prompted a large police response and resulted in more than a dozen arrests.

LGBTQ activists gathered outside the Wi Spa on Saturday morning to counter a protest against transgender access to the spa’s facilities. The Los Angeles Police Department declared an unlawful assembly in front of the spa near Wilshire and Rampart boulevards around noon when the two groups of protesters began to clash, according to police and videos posted on Twitter.

It was not immediately clear how many protesters were in the area. Protesters demonstrating against the spa’s policy waved signs saying “Save our children” and “Stop defending pedos.”

“Most people did leave the area, but currently there are a number of arrests made for failure to disperse,” Aguilar said.

No injuries have been reported. A reporter from the Guardian US who was covering the protest wrote on Twitter that she was chased and “thrown to the ground by right-wing anti-pedophile protesters.”

The demonstrations, similar to those that occurred at the spa earlier this month, were apparently spurred by a viral video taken by an irate customer at the spa in late June.

The woman in the video, which was posted to Instagram, complains to staff at Wi Spa that a man had allegedly walked into the women’s section and showed his genitals to young girls. The customer the woman complained about reportedly identified as a woman.

“He is a man,” the woman can be heard saying. “He is not a female. There are girls down there, other women who are highly offended by what they just saw and you did nothing. You sided with him.”

Wi Spa defended its policy in a statement to Los Angeles Magazine.

“Like many other metropolitan areas, Los Angeles contains a transgender population, some of whom enjoy visiting a spa,” the statement said. “Wi Spa strives to meet the needs of all its customers.”