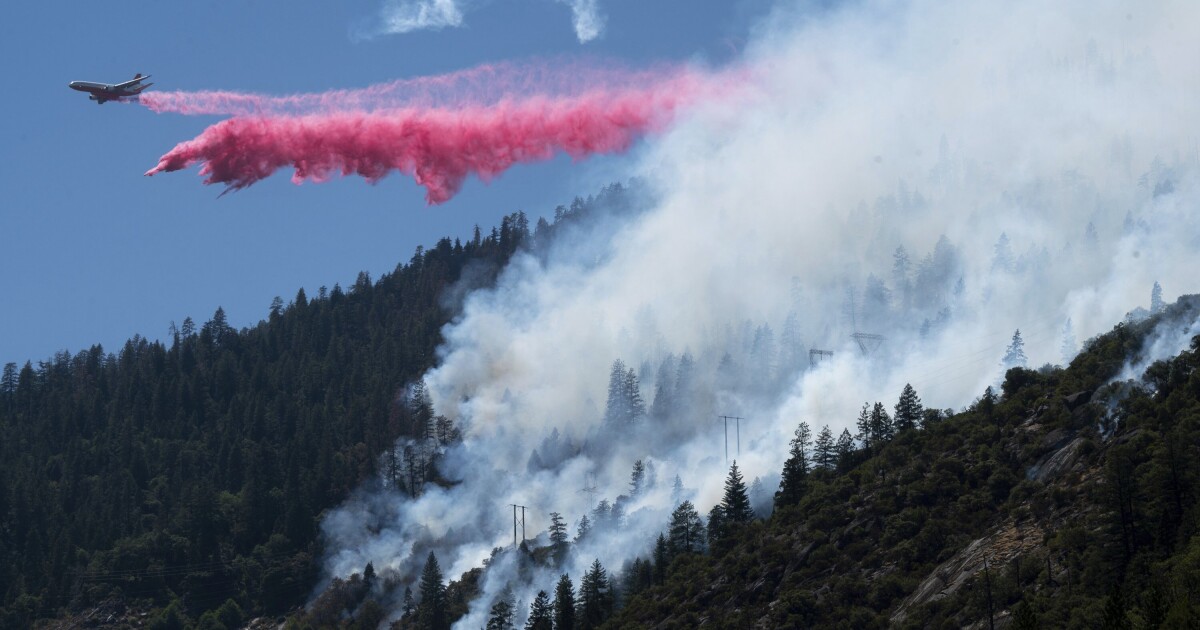 While the Sugar fire in Plumas neared the 100,000-acre milestone, firefighters on Thursday were continuing their efforts to contain the Dixie fire in Butte County.

Officials estimated the size of the Dixie fire at 2,250 acres, according to fire Capt. Jacob Gilliam of the California Department of Forestry and Fire Protection in Butte County. The blaze has had no containment.

Gilliam said the fire was burning in the scar of the 2018 Camp fire, but moving north, away from populated areas.

Still, the smoke and flames are stoking traumatic memories for some who survived that terrible fire, which decimated the town of Paradise and killed more than 85 people.

“It’s kind of nerve-racking,” said David Little of the North Valley Community Foundation, which provides relief and recovery efforts for the Camp fire victims. “The fire started just a couple of miles [away], on the same road, as the Camp fire in 2018. It’s really a sense of déjà vu that’s uneasy.”

Gilliam said about 350 firefighters and support personnel were assigned to the blaze Thursday. Their priority will be the fire’s southwestern perimeter, which is closest to the county’s populated areas.

“There’s a history of a strong down-canyon winds in that Jarbo Gap area, and so firefighters are really trying to secure that south and west flank,” he said.

Meteorologist Eric Kurth with the National Weather Service in Sacramento said temperatures near the fire will be in the upper 80s Thursday. Fairly typical wind gusts of up to 17 mph can be expected.

An evacuation warning remains in place for the Pulga and east Concow areas, the Butte County Sheriff’s Office said.

“Unfortunately, due to the wind and the smoke visibility, we had to set down our aircraft,” which enabled the spot fires to become more established, he said.

The Sugar fire is part of the Beckwourth Complex, which also contains the 594-acre Dotta fire that is 99% contained. Combined, they have already surpassed the 100,000-acre threshold.

In the path of the fires, the Lassen County Sheriff’s Office expanded mandatory evacuation order to areas including Doyle Proper on the west side of U.S. 395, from Laura Drive to County Road A26. Previously issued evacuation orders for other parts of Doyle remain in place.

Although the Dixie fire is within the Camp fire burn scar, Gilliam said there is plenty of dry brush and grass to fuel the flames.

Firefighters are defending the same containment lines against the Dixie fire that they used in the Camp fire, he said.

Those who remember that 2018 fire hoped that would be the only similarity between the two blazes.

“We’ve dealt with enough stuff in this area,” Little said, “and we don’t need another one.”