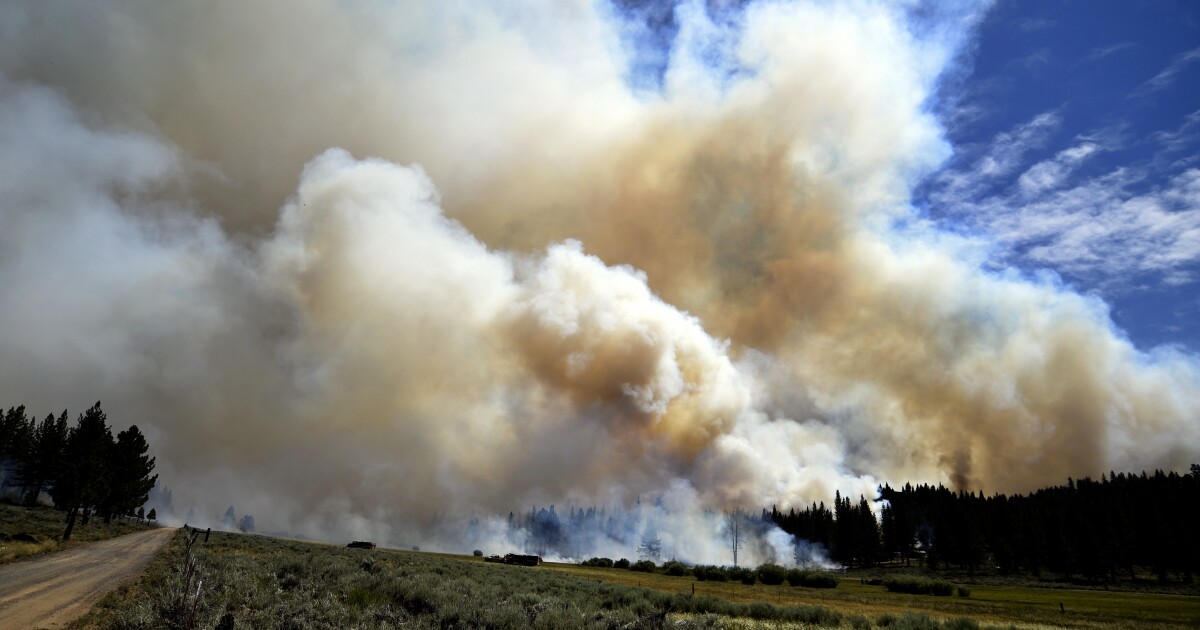 The fast-moving River fire near Yosemite National Park exploded to more than 9,500 acres Tuesday as firefighters tried to protect communities in the area.

Officials said at least four structures and four outbuildings have been destroyed and 600 others are threatened.

The River fire, which broke out about 20 miles southwest of Yosemite on Sunday afternoon, swelled to 2,500 acres in just a few hours and had spread to 8,000 acres by Monday evening, officials with the California Department of Forestry and Fire Protection said.

“The fire more than doubled in size since Sunday, so there’s a lot of activity going on,” said Chief Nathan Trauernicht with the UC Davis Fire Department, which deployed firefighters to assist Cal Fire with the blaze.

More than 1,200 firefighters and support personnel were battling the fire from the ground and the air Tuesday, Cal Fire spokesperson Jaime Williams said.

The fire was 15% contained, Williams said.

Firefighters are up against dangerous conditions, including soaring temperatures, low humidity and frequent spot fires, officials said. The National Weather Service on Tuesday issued a heat advisory for portions of Mariposa County, where temperatures could climb as high as 108 degrees.

“We’ve had very dangerous heat that the firefighters have been working in,” Williams said. “Things still remain very dry and very critical.”

While wind and topography are contributing to the fire’s spread, Trauernicht said the drought is a major driving factor.

“We haven’t seen drought and fuel moistures like this in a long time,” he said. “It creates a really dangerous situation, not just for the community, but obviously for firefighters who are trying to help.”

Mandatory evacuation orders and warnings were issued in parts of Madera and Mariposa counties.

The cause of the fire is under investigation, Cal Fire said.

The Sugar fire ignited July 2 and is now the state’s largest fire of the year. It could become the first 100,000-acre megafire of the season.

Homes were reported destroyed in multiple communities, and video posted to social media showed houses ablaze in Doyle. A damage assessment team is working on a tally of the structures lost.