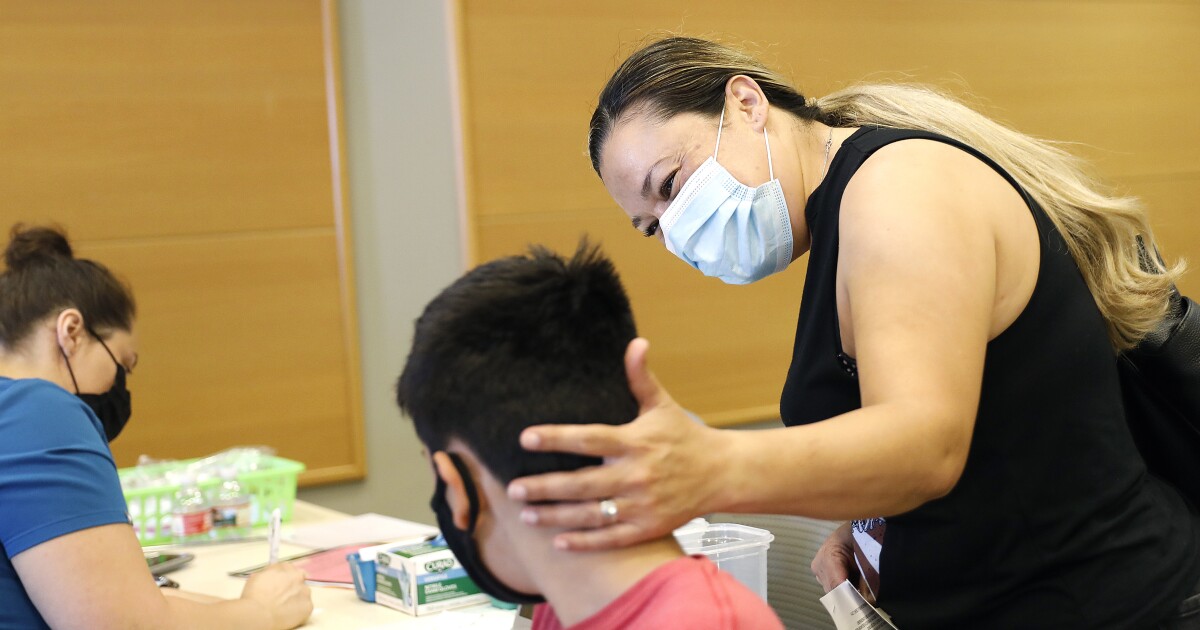 Recent spikes in coronavirus cases in Los Angeles County and elsewhere in California underscore a pandemic divergence, in which the unvaccinated face growing danger, while the vaccinated are able to move back to regular activities without fear of getting sick.

Some who have not been inoculated may have hoped that the dramatic decline in COVID-19 cases this spring and summer — which officials attribute to a robust vaccination campaign — would be enough to protect them without getting a shot. But with the spread of the highly contagious Delta variant, infections are again on the rise — and communities with low vaccination rates are in the crosshairs.

Los Angeles County reported more than 3,000 new coronavirus cases cumulatively over the last three days. It was the first time since early March that the county has reported three consecutive days with more than 1,000 new cases.

“In prior times, when we saw surges occurring, everyone had to be very concerned,” said medical epidemiologist and infectious-diseases expert Dr. Robert Kim-Farley of the UCLA Fielding School of Public Health. “However, in the current situation, it is really those who are unvaccinated that should be highly concerned.

“Bottom line: there is no safe haven against COVID-19 if you are unvaccinated,” he added. “The virus will find you.”

Officials don’t expect conditions to deteriorate to the levels seen last winter, before vaccines were available. Neither Gov. Gavin Newsom nor L.A. County officials have suggested imposing new restrictions on businesses or other public spaces to curb the spread of the coronavirus.

But the rises in hospitalizations and cases, which coincide with increasing circulation of the hyper-contagious Delta variant, mean more people need to get vaccinated.

“We’ve got still slightly under 4 million residents in L.A. County not yet vaccinated. The risk of increased spread remains very high,” said Public Health Director Barbara Ferrer. “The most powerful way to protect those in hard-hit communities … is going to be to close the vaccination gaps.”

But that positive big picture can be deceiving. Vaccination rates differ by county, by community, by age and by racial and ethnic group, and even areas with robust vaccine coverage may have pockets of people who remain at risk. That’s because there are millions of people in California who have yet to receive a dose because they’re too young or are unwilling to do so.

“The first line of defense for everybody 12 and older is, obviously, to build your confidence in this vaccine, get good information and come in as soon as possible to get vaccinated,” Ferrer said. “And for those who are not yet vaccinated, you need to go back to doing what we were all doing before we had vaccines.”

One estimate suggests it may take 84% of a population to either be inoculated or have survived a prior infection to reach herd immunity against the Delta variant; by contrast, it might take 71% to reach such a threshold against less contagious strains.

In Los Angeles County, the Delta variant has spread mainly among unvaccinated people. Early clusters blamed on Delta were identified among at least 49 residents in Palmdale and Lancaster, including 14 members of one household.

About 59% of L.A. County residents of all ages have received at least one vaccine dose. Black residents are among the least likely to be vaccinated; 45% of Black residents age 16 and over have been vaccinated, compared with 54% of Latinos, 65% of white residents and 76% of Asian Americans.

This is why, experts say, Black residents are more likely to test positive for the coronavirus or be hospitalized with COVID-19. Between June 13 and June 26, for every 100,000 Black residents in L.A. County, 65 were positive; for Latinos, the figure was 26; for white residents, 22; and for Asian Americans, 10.

Over the same period, for every 100,000 Black residents, 9.3 were newly admitted into hospitals with COVID-19; compared with 5.4 Latinos, 2.7 white residents and 1.7 Asian American residents.

Among L.A. County residents age 16 and up, 69% have received at least one dose. Some communities have lower rates; for example, less than 55% in that age group are at least partially vaccinated in Westlake, Compton, Lancaster and parts of South L.A. Other areas have higher rates: At least 80% have had a dose in El Segundo, Westchester, Manhattan Beach, South Pasadena, Rolling Hills Estates, Monterey Park, Culver City and Marina del Rey.

The problem is the same in both counties: the virus is spreading among the unvaccinated.

Rising case rates in Sonoma County are in part due to infections among the homeless population. A large outbreak has been reported at the county’s largest homeless shelter, in Santa Rosa, where 48 have been infected. They are the first cases reported there since the peak of the pandemic in January.

“This outbreak is unique from January since it involves the Delta variant, which the homeless community is especially vulnerable to,” wrote John Pavik, assistant director of communications for Catholic Charities, the nonprofit that runs the city-owned Samuel Jones Hall Homeless Shelter, in an email.

The trends in California mirror those of the nation as a whole, federal officials say.

The Delta variant is surging in pockets of the country with low vaccination rates, said CDC Director Dr. Rochelle Walensky. Many areas where less than 40% of residents have been vaccinated “are the locations in the country where we are seeing the increased hospitalizations and deaths among unvaccinated individuals,” she said.

“On the one hand, we have seen the successes of our vaccination program … with cases, hospitalizations and deaths far lower than the peaks we saw in January,” Walensky said. “And yet, on the other hand, we are starting to see some new and concerning trends. Simply put, in areas of low vaccination coverage, cases and hospitalizations are up.”

With California’s vaccine rollout nearly 7 months old, there’s mounting evidence as to the real-world effectiveness of the vaccines. Studies in the U.K. show that the Pfizer-BioNTech vaccine has been 96% effective at preventing hospitalization, and officials believe the Moderna and Johnson & Johnson vaccines are similarly effective.

Experts note that the vaccines afford the highest level of protection only when someone has received the full regimen — either one shot of Johnson & Johnson or two of Pfizer-BioNTech or Moderna.

About 51% of Californians are fully vaccinated. But some Californians who started their inoculation course have yet to complete it, leaving them potentially exposed to infection — especially by Delta. The recommended interval between shots is three weeks for Pfizer-BioNTech and four weeks for Moderna, but experts advise completing the series regardless of how long it’s been since the first dose.

In San Diego County, more than 140,000 residents are overdue for their second dose, officials said. It’s unclear how many other Californians are in the same boat. The state Department of Public Health said data on second-dose delinquency were not immediately available Friday.