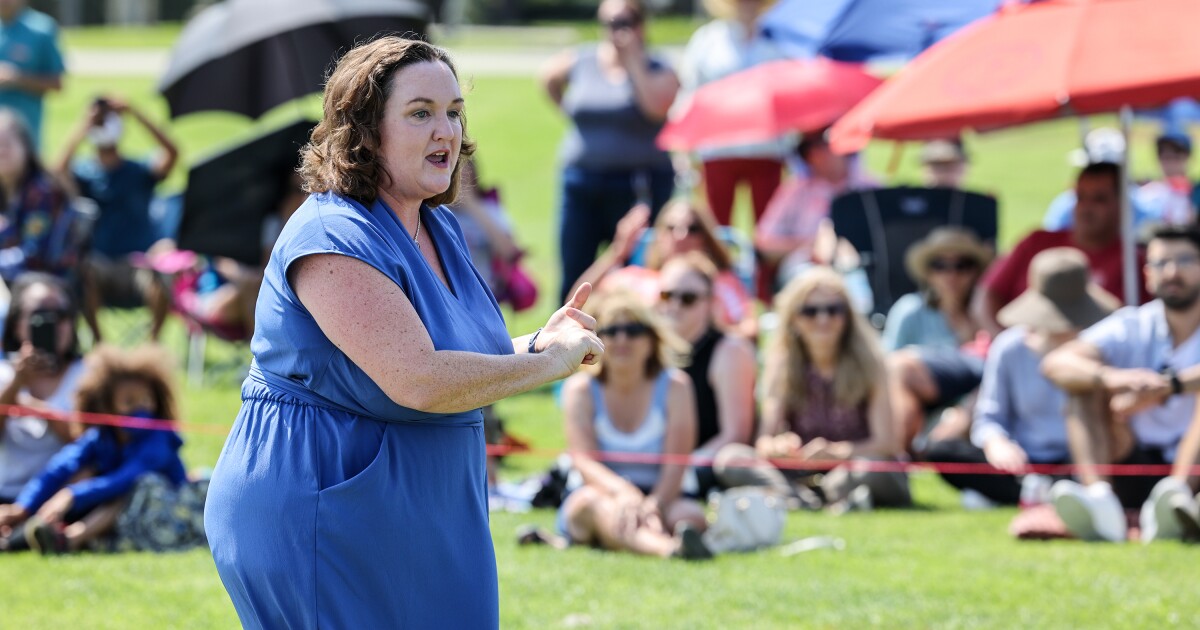 A melee broke out at Rep. Katie Porter’s district town hall meeting Sunday, with her backers scuffling with supporters of former President Trump who were loudly interrupting the congresswoman as she spoke.

Porter, a Democrat from Irvine, said that the acts of the protesters were premeditated and that all attendees had been given the opportunity to ask questions.

“It is disappointing that a small but vocal group of attendees, who advertised a ‘confrontation rally,’ created unsafe conditions at a planned family-friendly event,” Porter said in a statement. “While I absolutely respect their right to disagree, their disturbance disrespected all the families who attended and were ready to engage in a thoughtful, civil and safe way.

“My team and I are evaluating next steps, but my promise to Orange County families is that I will continue to hold town halls and to be in conversation with them.”

Porter was referring to an Instagram post by Nick Taurus, who says he is running against her in the midterm elections. On Thursday, he invited supporters to join him at the town hall to “CONFRONT KATIE PORTER!”

“Katie Porter is a far-left ideologue supported by Bay Area academics, the billionaire class and foreign lobbies!” he wrote in the post. “Her America Last policies are awful for the 45th district and we intend to voice our displeasure.”

Taurus was among the people involved in the scuffle; he declined to comment to The Times.

The fracas occurred shortly after Porter began speaking to a crowd of a few hundred people at Mike Ward Community Park in Irvine. It was her first in-person town hall since the start of the COVID-19 pandemic.

“I am so excited to be here with you all today. Thank you everyone for coming out to express your opinion,” she said. “This is an outdoor activity; we have a lot of wind. So I’m going to ask that everyone, regardless of your views, try to keep your voices down and be quiet so we can have a conversation.”

She added that as a mother of three, she had often worried about finding child care so she could attend such events, so she had directed her team to make the event family-friendly. Her staff handed out popcorn, snow cones and pocket copies of the Constitution to children.

“I’m really excited to have kids here with us today, and I want this to be a very family-friendly environment, even as we talk about the hard issues,” Porter said.

As she spoke, a handful of protesters shouted “Carpetbagger Katie!” and “Corrupt Katie Porter.” They continued to interrupt her as she spoke about climate change, COVID-19 vaccinations and other topics.

Porter supporters, who made up the bulk of the crowd, tried to drown out the protesters by chanting “Katie! Katie! Katie!” or screaming “Shut up!” A few confronted protesters, resulting in punches being thrown and men falling to the ground. Porter rushed to the scuffle, wrapping her arms around an elderly woman near the scrum.

Officers from the Irvine Police Department intervened and separated the factions. A department spokeswoman did not respond to questions about whether anyone was arrested or injured.

Porter, a 47-year-old attorney, flipped this onetime Republican stronghold in 2018, becoming the first Democrat to represent the district, then won reelection last year by seven points. Still, her election performance trailed that of President Biden, which is partly why she is among the Democratic House incumbents being targeted by national Republicans in next year’s midterms.

GOP officials argue that Porter, a darling of progressives, is too liberal for her swing district.

“Katie Porter and Democrats’ socialist agenda has caused everyday goods to cost more, created a border crisis and led to a rise in violent crime,” said Torunn Sinclair, spokeswoman for the National Republican Congressional Committee. “It will cost her reelection.”

No prominent challengers have emerged to run against Porter.

Whoever ultimately challenges her could face a tough fight. Porter, a protégé of Sen. Elizabeth Warren (D-Mass.), is a prodigious fundraiser and has drawn national attention because of her sharp questioning of corporate leaders and government officials and her use of whiteboards to explain complex policy.

After the rally ended, Taurus led a chant of “America first! America first!” and asked members of the audience if they were from America.

Kathleen Ripley, 35, winced as she watched. The Irvine resident supports Porter, though she is critical of the congresswoman, saying she wished she would talk about college debt. But Ripley left the town hall distressed by the spectacles she had witnessed that afternoon.

“It’s upsetting,” she said. “But there is no point in talking to them. They literally had a chance to put in questions just like all the rest of us … but instead they decided to be disrespectful and shout over the congresswoman and everybody else here.”