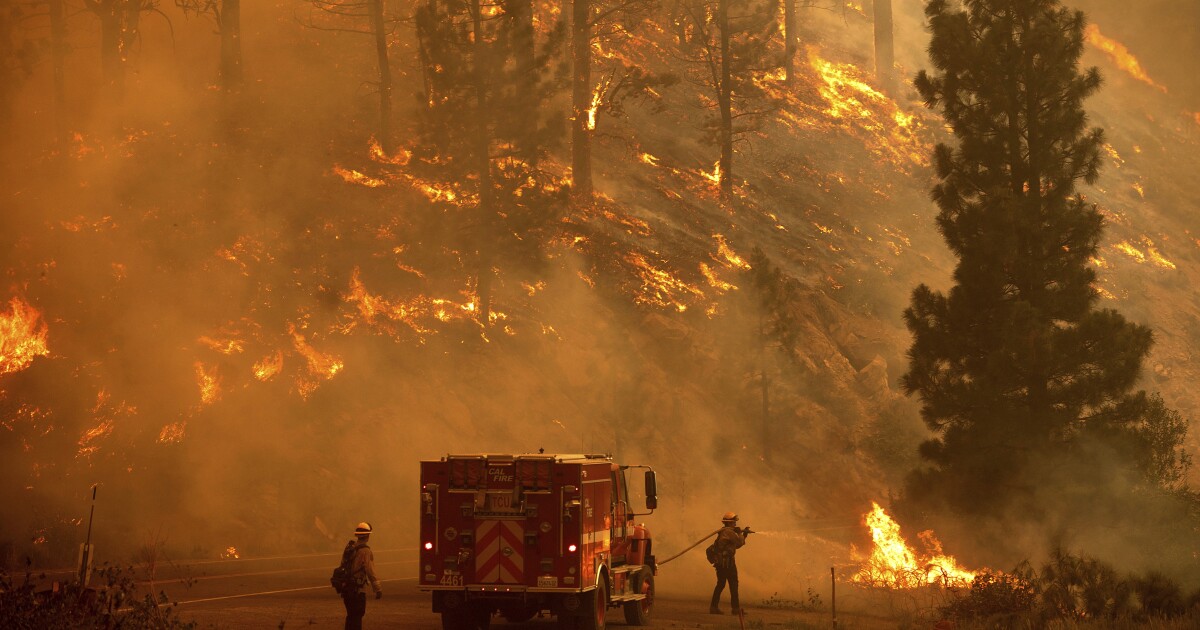 A wildfire in Northern California continued to grow overnight amid an intense heat wave and increased winds that were expected to complicate firefighting efforts.

Authorities received reports of homes destroyed in multiple communities, but no official figures have been released, said Lisa Cox, public information officer for the Beckwourth Complex fire. Video posted to social media showed homes ablaze in the town of Doyle. A damage assessment team was working on a tally.

The Sugar fire, which ignited July 2, had spread to 83,256 acres as of Sunday morning and remained at 8% contained. The fire, now the state’s largest of the season, was one of two sparked by lightning in the Plumas National Forest that have together been dubbed the Beckwourth Complex fire. The other, the Dotta fire, started June 30 and was 670 acres and 99% contained by early Sunday.

About 3,000 people in Plumas and Lassen counties, north of Sacramento, remained under evacuation orders or warnings Sunday.

The fire reached Highway 395 on Saturday evening, prompting the closure of the highway from County Road A-26 just north of Doyle to State Route 70. Still, firefighters were able to douse slopovers along the 395.

“They were expecting that once it got across into those light flashy fuels and grassy areas, they could catch it,” Cox said. “And as of now it’s looking like they are. But that’s for now.”

Firefighters were also able to directly engage the southeastern flank of the fire from the ground along Highway 284, as well as the western edge near the Dixie Mountain Lookout, Cox said.

Despite their best efforts, the fire grew by more than 22,000 acres from Saturday into Sunday as it continued to behave erratically amid extreme conditions.

“It’s really taken off,” Cox said. “I have to look at the numbers again because my eyes, it’s a lot to take in.”

At one point Saturday afternoon, a fire whirl was reported at the southern end of Constantia Road as the fire backed down an escarpment.

“Once it hit those lower elevations, those southwest winds were funneling down the terrain,” Cox said. “So they went downslope into those canyons reaching Constantia Road and in that flat land over there toward the 395, it was basically creating its own weather.”

Firefighters were expecting to see more of the same Sunday, with afternoon winds expected to tick up, gusting to 30 mph or more. The conditions have at times forced firefighters to temporarily withdraw from certain areas over safety concerns, Cox said.

“When we know that wind patterns are going to bring fire at those high gusting speeds up or down the canyon, we can’t have firefighters directly engaged with that,” she said.

The fire is behaving similarly to the massive North Complex fire, which was sparked by lightning in the Plumas National Forest last August, killed 16 people and burned more than 318,000 acres before it was brought under control nearly three months later, Cox said.

“A lot of people are having a little PTSD up here,” she said.

Firefighters were being instructed to take frequent breaks and hydrate as an excessive heat warning issued by the National Weather Service was extended through Tuesday. Forecasters warned that Sunday’s temperatures were expected to approach all-time highs.

Already, South Lake Tahoe saw a high of 93 degrees Saturday, tying the previous high of 93 for the date set in 2002, according to preliminary figures from the National Weather Service. Meanwhile, temperatures have not been cooling off much overnight, causing the heat to build.

Experts have said that rising temperatures and drought have combined to wring moisture from vegetation, leading to burn environments that more closely resemble the peak of the fire season than mid-July.

Record-setting California heat wave: How long will it last?