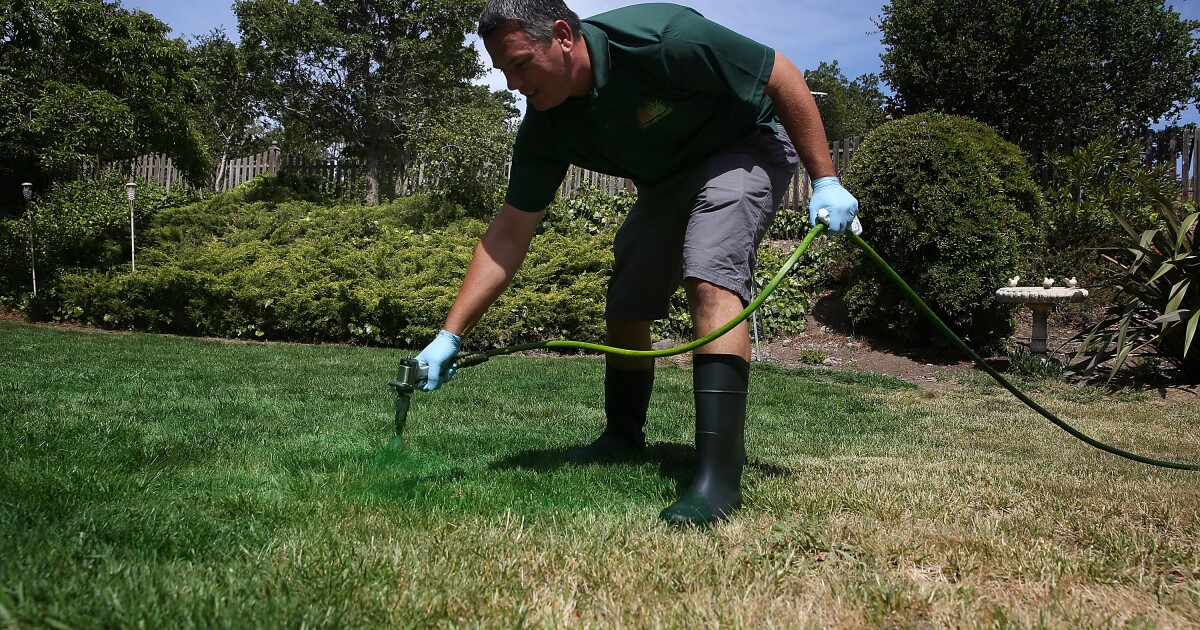 In the face of rapidly worsening drought conditions this week, Gov. Gavin Newsom urged all Californians to voluntarily cut their water usage by 15% — but what exactly does that mean for the average California household?

The governor made his plea Thursday as he extended a regional state of drought emergency to 50 counties, comprising about 42% of the state’s population. For many, the talk of water reductions reminded them of the shriveled lawns, attenuated showers and water-bucket toilet flushing of the last devastating drought.

It also prompted some to wonder just how much more water Californians can conserve, since they continue to use substantially less water than they did before the 2012-2016 drought.

“Californians overall are already so water conservation-minded that things like turning off this sink while you brush your teeth are sort of second nature for people,” said Faith Kearns, a scientist at the California Institute for Water Resources.

In April 2015, then-Gov. Jerry Brown ordered cities and towns across California to cut water use by 25%, marking the first mandatory statewide water restrictions in state history. Californians came close to meeting the goal, with residents reducing the amount of water they used by 24.5%. Now, a handful of years after the last drought, per capita residential water use remains about 16% below 2013 levels.

Newsom’s request is intended to bring California water production roughly back to where it dropped to in 2015 and 2016, said Marielle Pinheiro, research data specialist at the State Water Resources Control Board. Pinheiro said the number seemed feasible to the board because the state had been able to maintain those levels during the last drought.

Household water usage varies dramatically across the state based on a number of factors, but speaking in the broadest terms, Pinheiro said a 15% reduction would equate to a cut of roughly 14 gallons a day per person.

Paul J. Ferraro, a behavioral economist and distinguished professor of human behavior and public policy at Johns Hopkins University, said that, generally speaking, if you can induce people to reduce water use during a drought, those behavioral changes tend to persist, even if they wane a bit.

Ferraro and other water experts characterized outdoor water use as the obvious place for many California households to begin making reductions. According to the state, as much as 50% of residential water use goes to outdoor irrigation — much of it wasted.

“I think, at this point, a lot of the gains that can be made are really outdoors,” Kearns said.

Mark Lubell, professor of environmental science and policy at UC Davis, said that as droughts and heat waves intensify with climate change, the landscaping of California homes will probably continue to shift.

“We’re going to be seeing a lot more transitioning of landscapes to more drought-tolerant landscapes, by individual choice, but also by different sorts of government programs to either incentivize that or mandate it for new developments,” Lubell said.

During the state’s last extreme drought, the traditional California lawn underwent a reckoning, as generous lawn-removal incentives, mandatory water restrictions and social pressure fueled countless lawn-to-drought-garden makeovers. Some made permanent changes to their yards while others opted for less watering and more yellowing.

Lushly watered California lawns — which Gov. Brown famously declared were going to be “a thing of the past” — are likely to once again become battlegrounds as the state’s current drought stretches into its second year.

“The question is, will people want to reduce outdoor water use further, voluntarily? And that’s a tough one,” Ferraro said. But social norms play a considerable role in “getting people to do the right thing for public benefits,” he said, and norms around what a lawn should look like are changing.

East Pasadena resident Pamela Hicklin said that she and her husband started conserving water when the last drought hit. When Hicklin showers, she collects the water in buckets and uses it to flush the toilet or irrigate the lawn. She also plugs her sink’s disposal and uses the accumulated dishwater to run it.

Her semicircle lawn — which she had allowed to turn yellowish-brown during previous droughts — was back to green. But that would soon change. After hearing Newsom’s announcement, Hicklin planned to reduce her lawn irrigation by two-thirds. Still, the retiree remained frustrated. She said she felt like the “only one” in her neighborhood conserving water.

Ferraro said part of the challenge would come from the fact that, for many Californians, the low-hanging fruit of backyard water conservation had already been met during the last drought. If individuals had already put timers on irrigators and made sure they weren’t watering sidewalks, larger outdoor changes would probably be more costly.

But research suggests people can still conserve more, even after households have already curbed water usage.

During the last full year of the 2012-2016 drought, Katrina Jessoe, associate professor in the Department of Agricultural and Resource Economics at UC Davis, partnered with Burbank Water and Power to run a randomized control trial. The experiment began in spring 2015, nearly a year after the statewide restrictions had gone into effect. Residential households in the area also faced mandatory outdoor watering restrictions, and control households had already reduced household water use by 26% since Brown’s mandate had gone into effect the year before.

“In my mind, I was like, gosh, have we kind of beaten all the conservation levers out of people? Can we squeeze any more water conservation out of folks?” Jessoe said.

That was the question the researchers hoped to answer when they randomly assigned half of the households to receive bimonthly home water reports. The reports, which are aimed at urban water conservation, told people how their water use compared with similar households and offered personalized conservation recommendations.

The researchers found that households receiving those reports reduced their average hourly water use by 4% to 5% over the control group — even though dramatic reductions had already been made in the year prior.

As with other environmental issues, experts say that one challenge with individual water conservation is the scale of the problem in relation to personal contributions. It’s difficult to incentivize collective action when a single person’s half-full bathtub (roughly 12 gallons of water saved per bath) or less than five-minute shower (roughly 12.5 gallons of water saved per shower when using a water-efficient shower head) have negligible effects on the crisis at hand. But nearly 40 million people live in California. The voluntary reduction ask also extends to industrial, commercial and agricultural operations.

All told, a voluntary 15% water reduction statewide would save roughly 850,000 acre-feet of water if achieved, which is enough to supply 1.7 million households for a year, according to the governor’s office.