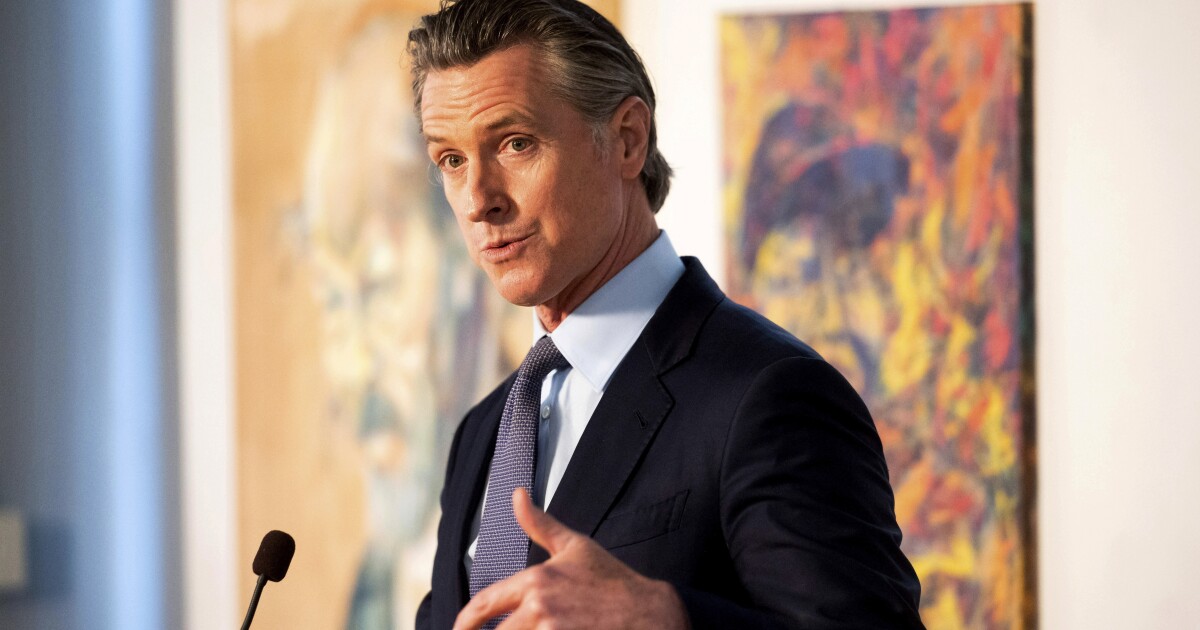 The recall campaign targeting Gov. Gavin Newsom heated up Friday in California’s state capital, with a courtroom showdown to determine whether the governor can identify himself as a Democrat on the ballot and gubernatorial hopeful Caitlyn Jenner fielding pointed questions at her first full-fledged news conference.

In Sacramento Superior Court, Newsom’s attorney argued that prohibiting the governor from listing his party affiliation on the ballot, a possibility after he missed the legal deadline months ago to designate himself a Democrat, would deprive Californians of critical information when voting in the Sept. 14 recall election.

Attorneys for the recall proponents, including Jenner’s legal counsel, criticized Newsom and said he was acting as though he was above the law, urging the judge to reject his request. The question now rests in the hands of Superior Court Judge James P. Arguelles who, after peppering attorneys on both side with questions during the hourlong hearing Friday morning, said he would issue his ruling on Monday.

The case centers on a lawsuit Newsom filed against California Secretary of State Shirley Weber, a fellow Democrat whom he nominated for the post in December, asking the court to require Weber to print his party preference on the recall ballots.

Weber had declined Newsom’s request to do so, saying the governor’s attorney failed make the request, as required by state law, when filing the governor’s official response to the recall in early 2020. Weber did not object to adding Newsom’s party affiliation if the judge ordered it.

Kevin Calia, the secretary of state’s outside counsel, told the judge that allowing Newsom to include his party designation would give Californians a “more informed choice” when voting in the election.

Jenner, a former reality television star, used the lawsuit as a launching pad for her first news conference, in which she gave a brief opening statement and fielded 11 minutes of reporters’ questions challenging her lack of political experience and spotty voting record.

Jenner said she joined the lawsuit as an intervener to ensure transparency in the process.

“I want people to see what’s happening up here in Sacramento and the things that are going on,” Jenner said. “And I just wanted to be part of this lawsuit so that Shirley Weber doesn’t fold — [so] she actually does her job.”

The Olympic gold medalist peppered her remarks with sports analogies and dismissed polling showing she is trailing in the race to replace Newsom, pointing out that her family’s reality show fame has given her more name recognition than Newsom.

“I guarantee you I’m in the lead” when it comes to who should replace Newsom, Jenner said.

“I have a tremendous advantage obviously because of name recognition, and I think people are learning more about me as we go through this process, about my political beliefs and how I would govern,” she said.

Jenner said that beginning in mid-August she will be campaigning by bus across the state, dismissing speculation that her run in the recall is more show than substance.

Jenner said she has no plans to reach out to former President Trump for an endorsement, saying she shouldn’t be considered a typical GOP candidate.

She described herself as having “conservative economic values” but noted that she is an “inclusive Republican” on social issues. The brevity of her news conference, however, made it difficult to push for more details.

Jenner said she has “no regrets” about her voting record, which shows she has failed to cast ballots in many elections.

“I voted when I needed to, depending on what the issues are,” she said.

Jenner’s first interaction with the Sacramento press corps and Newsom’s court hearing just a few blocks away provided a taste of what may lie ahead as California barrels toward the recall election in mid-September.

Until 2020, politicians facing a recall were not allowed to list their party designation on the ballot — and that included Gov. Gray Davis, a Democrat who in 2003 became the only California governor to be recalled from office.

But a new law, which Newsom signed in October 2020, states that officeholders must now ask to have their party preference put on the ballot during the initial seven-day window for responding to a recall notice . If they fail to do so, no party affiliation is listed.

Though Newsom responded to that initial filing on Feb. 28, 2020, he did not include his party preference. Newsom’s attorney, Thomas Willis, took the blame for the mistake, saying that when he filed the paperwork he was unaware that the law had changed.

During Friday’s hearing, Willis argued that Newsom should be allowed to have his party affiliation listed under the legal doctrine of “substantial compliance.” Willis cited a California Supreme Court ruling that said strict adherence to elections procedures is not required in cases in which there is a minor procedural mistake that does not affect the integrity of the elections process.

“The governor of California has to follow the law,” Early told the judge. “This might be a bitter pill for the governor to swallow, but swallow it he must.”

The current recall effort is the sixth launched against Newsom since he took office in January 2019 and, like the others, got off to a slow start.

However, in a separate case,Arguelles granted recall proponents an additional five months in November to gather and submit 1.49 million petition signatures from California voters, the number required by state law to qualify the recall for the ballot. The judge did so after the recall campaign argued that the state’s COVID-19 shutdowns and restrictions had limited the ability to circulate petitions.

Neither the governor nor the secretary of state decided to appeal that ruling, a decision that some Democrats believe was a mistake.

The attorney for the recall proponents in that case was Bradley Benbrook of Sacramento, a former partner in a Sacramento law firm with Arguelles. Benbrook also represented Jenner in Friday’s hearing.