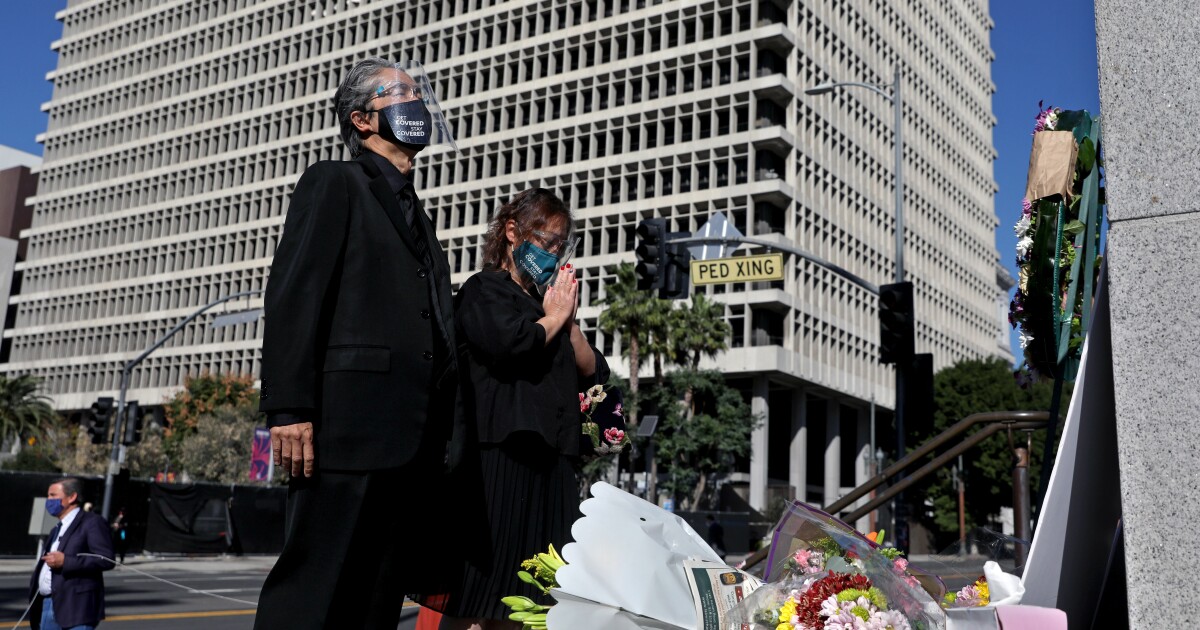 After COVID-19 outbreaks and the deaths of at least four people who worked in Los Angeles County courthouses, California‘s workplace safety agency plans to fine the local court system more than $25,000 for multiple violations.

In a notice Wednesday to L.A. County Superior Court, the state Division of Occupational Health and Safety, known as Cal/OSHA, identified at least three health and safety violations, two of which it deemed “serious.”

The proposed fines and the finding of serious violations were a blow to a court system that consistently defended its pandemic safety practices in the face of mounting criticism from employees, political leaders and attorneys, as well as a lawsuit from civil justice groups who accused the court of prioritizing the “continuity of nonessential operations over community safety and human life.”

The infractions stemmed from the working conditions and safety measures put in place for court interpreters, who provide translation services during hearings, trials and meetings among attorneys and criminal defendants. The ranks of interpreters were especially hard hit during the pandemic: two full-time and one contracted interpreter died earlier this year from COVID-19.

“Is it enough to fine them that? I’m not going to make the judgment. But I think something had to happen,” said Michael Ferreira, the president of the California Federation of Interpreters, the union representing court interpreters in L.A. County and across the state. “My view is things definitely could have been done better, and apparently, Cal/OSHA agreed with that concept.”

A spokesperson for L.A. County Superior Court did not immediately respond to a request for comment.

The court has up to 15 days to initiate an appeal to contest the penalties proposed by Cal/OSHA. It’s unclear if court leaders plan to oppose the fines.

The onset of the pandemic in the spring of 2020 brought the nation’s largest local trial court to a near standstill, forcing the closure of several courthouses, the delay of trials and shutdown of all but the most essential proceedings.

As the pandemic dragged on, the court expanded its ability to conduct hearings remotely. By the final months of 2020, however, many in-person court operations had resumed, including some eviction proceedings, traffic hearings and jury trials, despite complaints that court leaders were risking outbreaks of the virus.

Court staff and attorneys complained of dangerous conditions and inconsistent practices, including judges permitting witnesses to testify without masks; drooping masks on inmates; and an inability to maintain physical distance in cramped courthouse meeting rooms and in interviews with inmates in custody.

In late 2020, about 16 court interpreters at the Criminal Justice Center in downtown L.A. were potentially exposed to COVID-19 after an interpreter tested positive. That interpreter was not permitted by her bosses to quarantine at home on paid leave, according to the interpreters’ union, even though others in the courtroom with her were able to quarantine.

Fourteen of the interpreters “self-quarantined,” but two did not out of fear of being fired, according to state records. One interpreter who continued working, Sergio Cafaro, was later hospitalized with COVID-19 and died on Jan. 12.

Two other court employees died in January. In February, a contract interpreter of a Mayan language, Policarpo Chaj, died after spending 41 days at the hospital.

Cafaro’s death led to the Cal/OSHA investigation at the courthouse. According to the investigative findings, the agency found no violations directly related to Cafaro’s death.

However, the agency did find three violations at the courthouse: One arose from the court’s failure to immediately notify Cal/OSHA that an employee was seriously ill and hospitalized with COVID-19 in early January. That violation carried a proposed fine of $5,000.

A second violation, which resulted in a proposed fine of $13,500, arose from the court system’s failure to implement an effective illness and injury prevention program and correct unhealthy practices, including a lack of COVID-19 prevention training to interpreters.

The third violation, with a proposed fine of $6,750, stemmed from the court’s failure to ensure physical distancing in the interpreters’ lounge.

Last month, the court lifted most restrictions on public access to courtrooms; however, masks are still required inside courthouses.