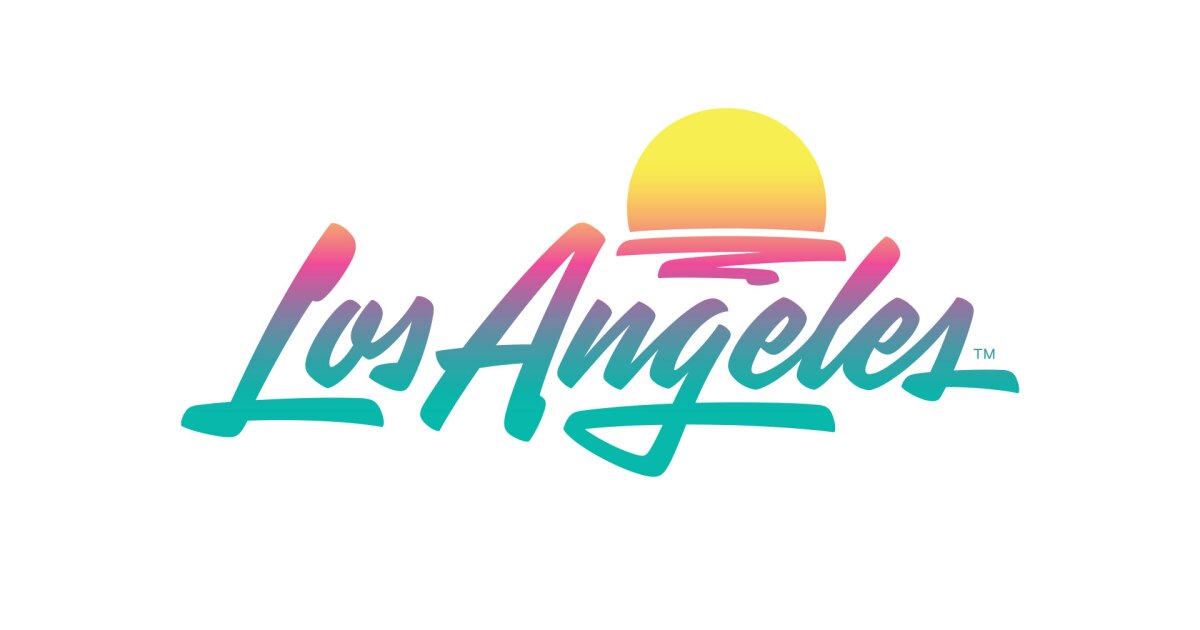 Los Angeles has a new logo. Like me, you may have two reactions to this news. The first: I didn’t know L.A. had a logo. Followed closely by, Who needs a logo when you have Dodgers gear?

But L.A. does indeed have a logo — one devised by the Los Angeles Tourism and Convention Board for the purpose of raising our town’s profile among, well, tourists and conventioneers. Last month the logo received a refresh after nearly a decade.

It has now been replaced by a much punchier script, delivered in a tropical palette of gradient colors — turquoise, pink and gold — all placed beneath the image of a setting sun. The old logo no doubt held its own on a piece of letterhead; the new one comes ready to slap on sherbet-y beach tees. (More on that later.)

The Los Angeles logo is a collaboration between Shepard Fairey’s Studio Number One and House Industries, a design shop led by Andy Cruz with a specialty in logos and fonts. The launch is timed to the reopening of Los Angeles in the wake of the pandemic. (It is part of a new promotional campaign that pitches L.A. as “your comeback story.”)

The multicolored design was trumpeted as reflecting the diversity of Los Angeles. Fairey, in a statement accompanying the release, said part of the challenge was to design “a mark representing all the things that Los Angeles means to people.”

It also needed to have broad appeal among its prospective customers, be they global companies looking to book conventions in L.A. or tourists who believe they might actually see a celebrity in Hollywood. And, as was prominently noted in a story about the redesign in Fast Company, “Part of the assignment was to appeal to Gen Z and millennial visitors from key markets.”

Mentioned absolutely nowhere is Gen X. I get it we’re middle-aged cranks and nobody wants us, but if there’s an era of design that the new logo is channeling, it’s the ’80s. And guess who was alive and rocking the Aqua Net back then?

When the new logo began to circulate on social media early this week, some early assessments compared it to the graphic design for the ’80s cop show “Miami Vice.”

I disagree. The logos may share the color turquoise, but the “Miami Vice” logo is angular, inspired by Art Deco. (If the logo resembles Miami anything, it’s the flamboyant design of the 2018 uniforms for the Miami Heat, which featured a script logo inspired by a font that was used at the Miami Arena in the 1980s.)

More than anything, L.A.’s new logo is firmly rooted in the culture of California surf.

Cruz told Fast Company that the team was inspired by hand-painted signs and skate gear, such as the decks produced by “Dogtown & Z-Boys” icon Tony Alva, which frequently feature a logo with a bold script. When I saw the design, I was immediately taken back to the Ocean Pacific brand T-shirts of my youth, which were often emblazoned with gradient script logos and images of palm trees and sunsets.

Ocean Pacific — better known as OP — was also famous for its mystifyingly popular corduroy men’s shorts, which still materialize regularly as a vintage items on EBay (some in the neighborhood of $100). Established in 1972 by Jim Jenks while he was working at an Encinitas surf shop, the brand, along with Hang Ten, become one of the first to market surf fashion to an audience beyond surfers.

OP sold a vision of the California lifestyle that tasted of saltwater and was personified by attractive, sun-kissed blonds. At its peak, its licensing operations topped $400 million. But after financial trouble and corporate infighting in the 1990s, the name was ultimately sold to licensing company Iconix Brand Group in 2006. Today it’s still possible to buy tanks with the gradient OP logo from the ’80s as part of the brand’s “heritage” collection. (Don’t worry, Gen-X, we’re not old, we’re “heritage.”) The company regularly posts throwback images of its vintage designs on Instagram — throwbacks that would look right at home with the new Los Angeles logo.

Certainly, surf design’s roots go deeper than OP. The tropical color palette was something that had been popularized a generation prior — by graphic designers such as John Van Hamersveld, who designed the poster for “The Endless Summer,” thereby helping turn bright shades of orange, pink and yellow into graphic design staples. (A fascinating Vanity Fair piece on the history of the poster’s design, cites Lorraine Wild, former director of the graphic design program at CalArts, who noted that prior to that poster, orange was not a color “used by serious designers on the East Coast.”)

Like its design forebears, the L.A. Tourism and Convention Board’s logo is all about channeling the vibe of earthly paradise — L.A. as land of tasty waves and ethereal sunsets. It’s a logo that is nostalgic for VW buses and surfer magazines.

This is an L.A. that is often more illusion than truth, an L.A. that couldn’t feel more distant from the one that has emerged, bedraggled and divided, in the wake of the pandemic, where political battles rage over the clearing of beachside homeless encampments in Venice.

But travel marketing isn’t a bearer of hard news. It’s a kernel of truth served in a generous breading of fantasy. Which is probably why no one asked me to design the logo. Because L.A.’s true logo isn’t a sunset. It’s one of those burning gas stations painted by Ed Ruscha.