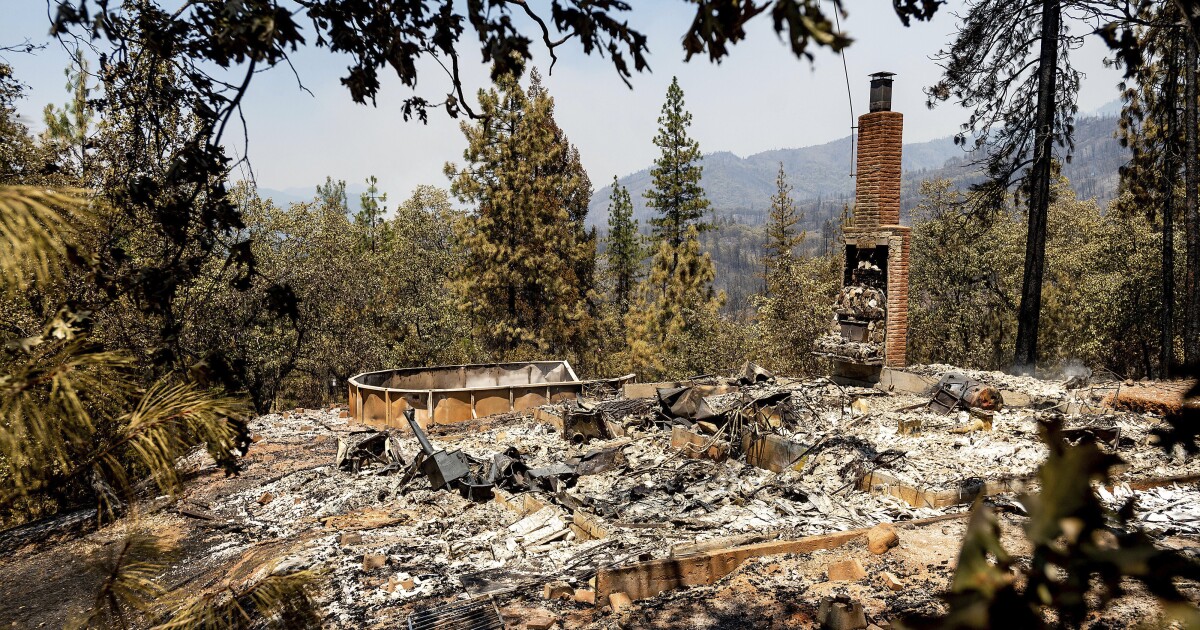 Three large wildfires were continuing to burn Saturday in Northern California amid hot, dry conditions that have had experts warning for months that this fire season could be severe.

The most destructive to structures was the Salt fire in Shasta County, which authorities estimated had burned 27 homes and 14 outbuildings as it grew to 7,467 acres by Saturday morning.

The fire was posing a threat to the communities of Lakehead, Pollock and Riverview, where there are several resorts, RV parks and primary residences, authorities said. Evacuation orders remained in place.

The fire had also damaged some Pacific Gas & Electric power infrastructure, including a high-voltage power line and an electric substation, officials said.

The fire started Wednesday afternoon when a vehicle traveling north on Interstate 5 sent sparks into dry vegetation alongside the road, authorities said.

Firefighters were able to use cooler weather to strengthen containment lines along the I-5 corridor Friday night but said the highway remained threatened.

The fire had moved into Campbell Creek and was continuing to spread north toward the Crane Mountain area, officials said. Parts of the fire were starting to reach burn scars from the Delta and Hirz fires in 2018, said Dennis Burns, fire behavior analyst with California Incident Management Team 2.

“That tells you there’s a lot of fire history in this area,” Burns said. “When this fire initially started it was like the only area that hasn’t burned and now we’re moving into area that has burned, which gives us some opportunities. The fuels are a little bit less dense.”

Nearly 500 personnel were fighting the fire, which was 5% contained as of Saturday morning.

Farther north, near the border with Oregon, the Tennant fire had burned 10,012 acres and was 17% contained as of Saturday morning. Although the acreage appeared to have grown overnight, it was the result of more accurate infrared mapping, said Ervin Barragan, public information officer for California Interagency Incident Management Team 15.

The fire has destroyed two homes, one commercial building and two outbuildings, he said.

“The winds have been pretty calm,” Barragan said Saturday. “We’re just trying to get some more containment on the fire but there’s nothing extraordinary going on today.”

Nearly 700 personnel were assigned to the fire, which broke out on the east side of the Klamath National Forest late Monday afternoon near Highway 97 and Tennant Road. Its cause was under investigation.

The area was unseasonably warm, with forecasts calling for highs of 93 to 101 degrees and a heat advisory in effect through Sunday, said Misty Firmin, meteorologist with the National Weather Service in Medford.

Already, the drought has resulted in below-average snowpack that melted earlier than usual and parched vegetation. Now, in July, firefighters say they are seeing burn conditions more typical for August.

To the southwest, 1,420 personnel were fighting the Lava fire, which was 24,460 acres and 36% contained as of Saturday morning. More than 2,300 residents remain under evacuation orders.

The fire was one of several ignited by lightning in the Siskiyou-Trinity National Forest the night of June 24. Crews worked through the following day and thought they had extinguished the fire at a quarter-acre, but about an hour later it flared back up again and within days grew into California’s largest of the season so far.

The fire has drawn attention to a prolonged conflict between Siskiyou County authorities and Hmong marijuana growers over access to water in the Shasta Vista subdivision, where some of the farms are located. Tensions peaked amid evacuations Monday, when law enforcement officers shot and killed a man who allegedly tried to drive around a roadblock and waved a handgun at the officers, authorities said.

In addition, the Siskiyou County Sheriff’s Office on Wednesday arrested 14 people in and around the subdivision for entering and refusing to leave the evacuation zone, the sheriff’s office announced Saturday. They included a man who allegedly ran a roadblock and pushed a county employee with his vehicle, the sheriff’s office said.

Authorities were continuing to monitor roads and arrest residents who stayed behind as they trickled out of the subdivision days later, with arrests taking place as recently as Saturday morning, said Ed Szendrey, a private investigator who is working with law firms that represent some of the residents in other legal matters. Those arrested were being taken to Yreka, booked and released with a notice to appear in court, he said.

The aggressive stance was surprising, said Szendrey, who previously worked for the Los Angeles County Sheriff’s Department and retired as chief investigator for the Butte County district attorney’s office.

“It used to be the past, if somebody stood their ground to protect their property even though there was an evacuation, that was the chance they took,” he said. Siskiyou County Sheriff Jeremiah LaRue did not immediately respond to a message seeking comment.

In a bid to cut down on the outdoor marijuana grows, which are illegal in Siskiyou County, the county first criminalized selling water to the farms and then in May banned water trucks carrying 100 or more gallons from traveling on certain roads leading to them.

That’s been met with allegations of racism from residents. There are many outdoor marijuana grows in the area but the only roads targeted were those leading to Hmong communities, said attorney Allison B. Margolin, who is representing some of the community members as they challenge the ordinance in federal court.

In a motion for a temporary restraining order filed earlier this month, which a judge denied, Margolin pointed out the importance of water trucks being able to get into the subdivision so that residents can fight fires quickly. It can take Cal Fire some time to access the remote area, she said.

The day after the ordinance was passed, Margolin wrote, a fire ignited in the subdivision and two homes burned before firetrucks arrived.

That was an ominous preview of this past week, when residents were left unable to defend their properties as the Lava fire approached, she said.

“This was all predicted,” Margolin said Saturday.

Officials have not yet disclosed whether buildings were destroyed in the Lava fire, saying that teams are continuing to assess the damage. Szendrey, who visited the subdivision Tuesday, said he saw burned cars and a destroyed fifth-wheel trailer but that a number of homes appeared to have been saved, which he attributed to the Hmong residents’ efforts.

“I saw them using buckets to get to spot fires,” he said. “I saw one man putting the fire out at the base of a tree by getting down on his hands and throwing dirt on it.”

Szendrey said he received complaints from residents that fire personnel were lined up on Highway 812 on Monday and would not enter the subdivision until everyone was evacuated.

By Tuesday, firefighters had entered, he said, but he didn’t see anyone actively fighting the blaze except Hmong community members.

“I don’t know why that is other than there is this perception that they’re supposedly in this very dangerous area,” he said. “I saw no guns. I saw no one trying to protect any marijuana grows. I saw people trying simply to put out a fire.”

Officials have said the only time firefighters paused operations in the area was for a brief time immediately after the shooting but that they had been actively engaging the fire there ever since.