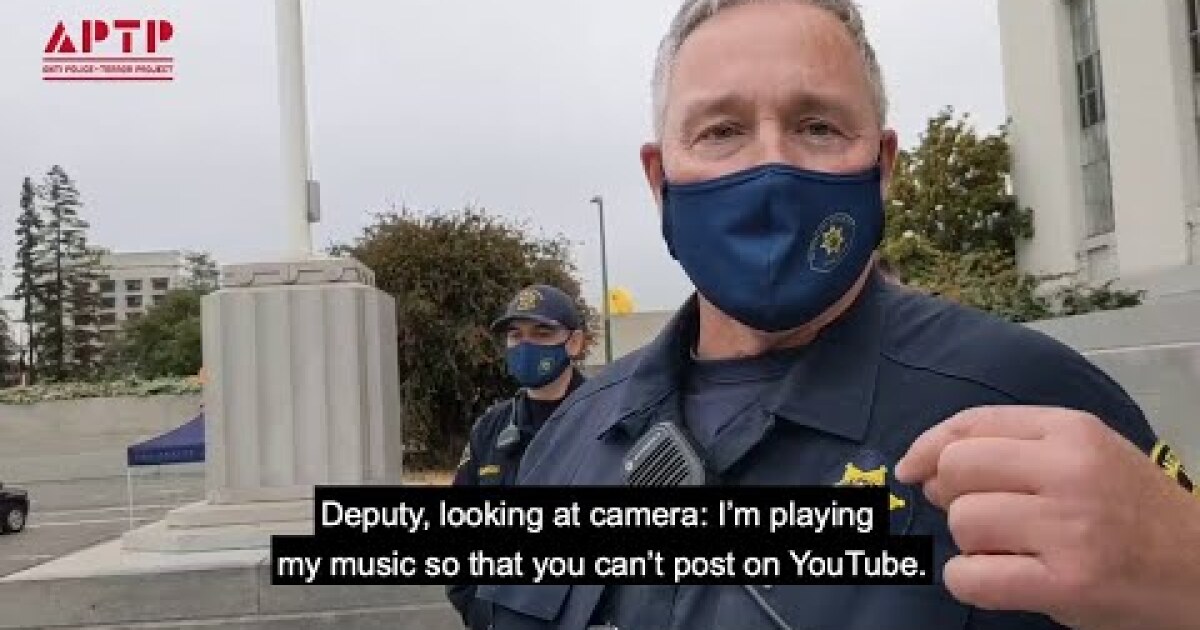 There’s bad blood between an Alameda County sheriff’s sergeant and protesters after he used a Taylor Swift song in an apparent effort to avoid an on-camera confrontation earlier this week.

Authorities say an investigation has been launched into Tuesday’s encounter between Sgt. David Shelby and members of the Anti Police-Terror Project, an organization that seeks police reform.

During the incident, Shelby — who was being filmed by protesters on the courthouse steps in Oakland — pulls out his cellphone and begins playing music while arguing with James Burch, the policy director for the Anti Police-Terror Project.

The move was seemingly to prevent video of the encounter from being shared on social media, which restricts content that contains copyrighted music.

Sgt. Ray Kelly, a public information officer for the Alameda County Sheriff’s Office, said in an email that sheriff’s officials had seen the video and referred the incident to the department’s internal affairs bureau.

“This is not approved behavior,” Kelly said. “It will not happen again.”

Burch and other members of the group were outside the Alameda County superior courthouse on June 29, supporting the family of Steven Taylor, who was killed by San Leonardo police in April 2020 during a mental health crisis inside a Walmart store. Officer Jason Fletcher has been charged with voluntary manslaughter in Taylor’s death.

Burch, along with Taylor’s family and other protesters, were gathered around speakers that were broadcasting testimony of the trial outside the Rene C. Davidson Courthouse when they were approached by four Alameda County sheriff’s deputies and asked to remove banners that were hung on the walls.

When group members were told they could not move the banners to the stairs, one of the deputies — identified in the video as Shelby — began arguing with Burch. When Shelby noticed that a bystander was recording the confrontation on her cellphone, he reached into his pocket, pulled out his cellphone and began blasting Swift’s “Blank Space” before tucking the phone into the front of his uniform.

“Are we having a dance party now?” Burch can be heard asking on the video.

The protester recording the video then asked Shelby whether he was trying to “drown out the conversation.” Shelby replied, “No,” while the music continued in the background.

“You can record all you want, I just know it can’t be posted to YouTube,” he said.

When Burch asked whether Shelby’s actions were procedure for the Sheriff’s Office, the sergeant responded: “It’s not specifically outlined.”

The video has since gone viral, amassing more than 780,000 views on the Anti Police-Terror Project’s Twitter page as of Friday.

Kelly said sheriff’s officials addressed the incident with Shelby, who has been with the department for 15 years. Further, all deputies will be advised about appropriate procedures during pre-shift meetings, Kelly said.

An internal investigation has been launched to determine whether Shelby violated the department’s code of conduct, officials said. And the Sheriff’s Office is also in the process of writing a new policy that prohibits this type of behavior.

Shelby is not the only law enforcement officer to exploit the internet’s copyright-flagging systems. In February, a Beverly Hills police officer played Sublime’s “Santeria” while being filmed during a confrontation with L.A. activist Sennett Devermont, who regularly livestreams protests and encounters with police on his Instagram account.

Social media websites have adopted stringent rules and policies regarding the use of copyrighted music in posts, with platforms such as Instagram and YouTube prohibiting users from sharing any content that may contain copyrighted material, such as an image or a song.

Police-reform advocates have reproached the tactic, saying it’s a way for officers to avoid being held publicly accountable. Burch was not immediately available for comment Friday but said in a statement that the encounter with Shelby “speaks volumes” to how the Alameda County Sheriff’s Office perceives its relationship with the people of Oakland.

Virtual restaurants and the ghost of California burritos past