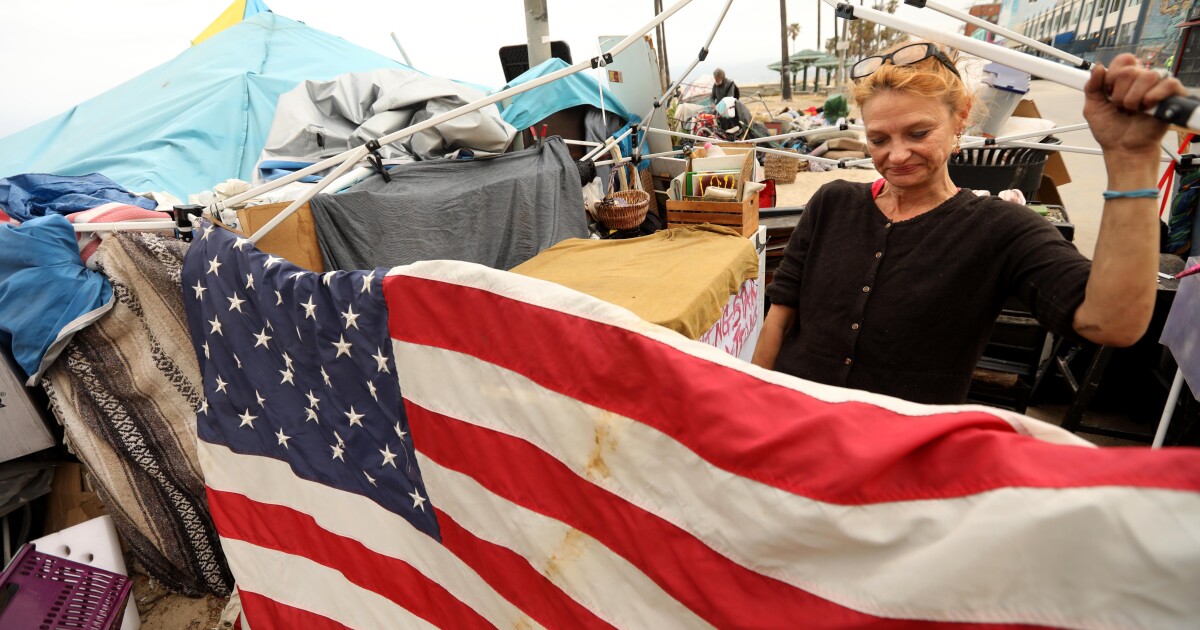 Over the objections of activists, nonprofit groups and two of their colleagues, Los Angeles City Council members on Thursday approved a new package of restrictions on encampments near homeless shelters, daycare centers and an array of other public facilities.

With some arguing the measure would further criminalize homelessness and others saying the council took too long to act, council members voted 13 to 2 to enact rules regulating sitting, sleeping and storing property near fire hydrants, building entrances, driveways, libraries, parks, elementary schools and several other locations.

Backers of the ordinance said it would restore access to public spaces in a way that is compassionate, limiting the involvement of law enforcement and labeling most violations as infractions that would result in fines, not jail time. And they argued that their constituents would not continue to support new shelters and or other homeless facilities unless the city shows they have regained control of the sidewalks and other public spaces.

Councilman Bob Blumenfield said he has already faced protests at his home after working to open two “tiny home” cabin communities for unhoused residents in his west San Fernando Valley district. If those facilities become a magnet for encampments, “I’m never going to be able to get another cabin community sited in my district,” he said.

Foes of the ordinance said the city had rushed the anti-camping rules to a vote without working through the details, such as how enforcement would work and what the outreach strategy would be. Councilwoman Nithya Raman, who opposed the measure, said it lacked compassion and would simply cause homeless people to continue being pushed from place to place.

“This was a quick and hasty process, and it was done behind closed doors,” said Raman, who represents neighborhoods stretching from Hancock Park to Sherman Oaks.

Even some who voted in favor sounded like they had low expectations for making progress in combatting the city’s protracted homelessness crisis.

“This problem at this moment feels hopeless,” said Councilman Marqueece Harris-Dawson, who represents part of South Los Angeles, before casting a “yes” vote.

The council’s lengthy debate reflected the growing frustration both inside and outside City Hall over the continued struggle to build housing and shelter for the city’s neediest while also restoring access to some of the city’s public spaces. Some council members spoke of their own personal struggles with housing insecurity, while others described the suffering and death of homeless people in their own districts.

Council President Nury Martinez acknowledged that she and her colleagues are under political pressure, but argued that the debate over homelessness and access to public spaces had ignored many of the working-class families who populate the city.

“Those are the people that are missing in this conversation,” she went on. “So I will not live in fear, and I will not legislate in fear. So if you want to come for me, you can go ahead and do that.”

Thursday’s vote comes as homelessness has metastasized across the city, with encampments taking hold in Hollywood, Koreatown, South Los Angeles and dozens of other communities. The issue is by far the most pressing political one facing City Hall politicians, who are less than a year away from a municipal election.

Homeless advocates have described the city’s response as woefully inadequate, arguing that many of the facilities that have opened don’t meet the needs of the city’s unhoused. Neighborhood groups have voiced frustration about encampment fires and the loss of access to parks, sidewalks, library entrances and other public locations. And residents on both sides have voiced alarm at the number of people on the streets mired in poverty, many of them struggling with addiction or mental illness.

Against that backdrop, the city has six council members running for reelection, a seventh running for city controller and an eighth for mayor. Another four are contemplating, or have not ruled out, bids for mayor in the June 2022 election.

Councilman Mike Bonin, who is running for reelection and was recently served with a recall notice, said he had faced political pressure for opposing the new ordinance. But he argued that he could not support it at a time when the city still lacks enough shelter beds to serve 61% of its homeless population.

In an impassioned address, Bonin described his own history as a recovering addict who at one point did not have a home, living instead in his car, on friends’ couches and on a few nights, on the beach.

“I cannot describe how demoralizing, and dehumanizing and defeating that experience is when you don’t know where you’re going to sleep. I can’t adequately express the combination of shame and frustration and anger and desperation and confusion you feel in that moment.”

Bonin has been joined by a coalition of advocacy groups, who argue the measure does nothing to address homelessness in the city, which was found to have more than 41,000 unhoused residents last year.

“Instead, it doubles down on the city’s criminalization strategy,” said the group, which includes such organizations as Ground Game Los Angeles, Black Lives Matter-Los Angeles and the L.A. chapter of the Democratic Socialists of America.

The anti-camping ordinance cannot go into effect until council members cast a second vote, which is expected to take place at the end of the month. It would also need Mayor Eric Garcetti’s signature and several weeks of procedural tasks to occur.

A spokesman for Garcetti said Thursday that the mayor supports the ordinance.

A Blockchain Platform that follows Ethics and Morals of Islamic Finance