Will L.A. require city employees to get vaccinated? 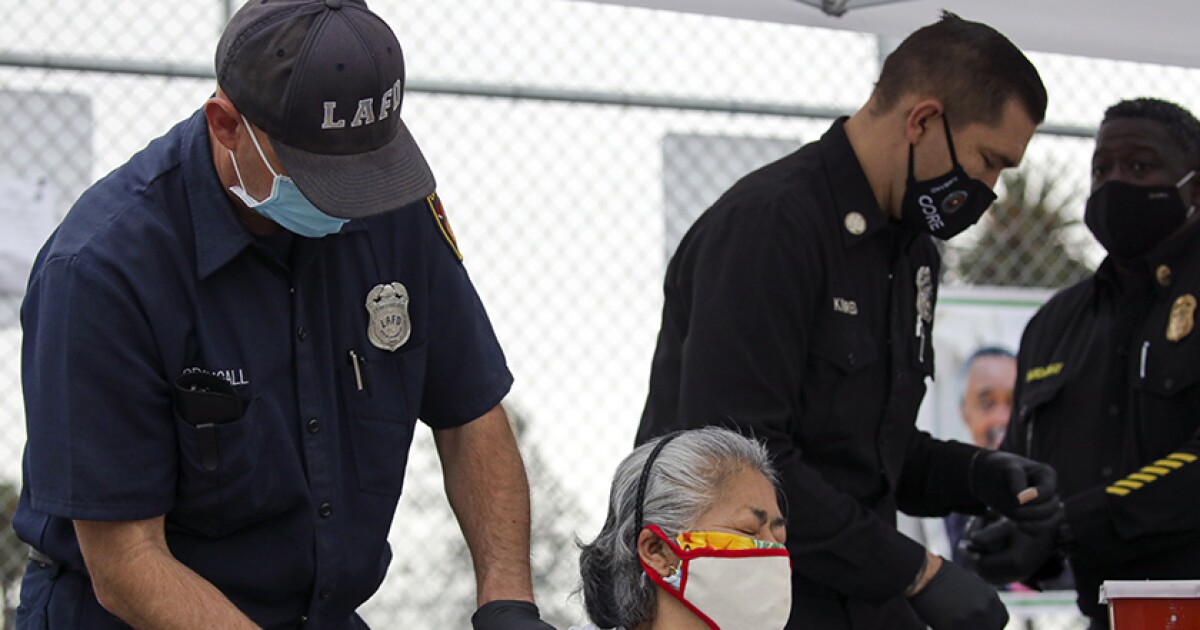 During a meeting between Mayor Eric Garcetti and his city department heads Monday, a conversation about how to increase COVID-19 vaccination rates among city employees veered at one point to vaccination mandates — including the one being implemented in San Francisco.

Whether L.A. will follow San Francisco’s example, however, is unclear.

San Francisco announced last week that all 35,000 of its employees will have to get vaccinated against COVID-19 or risk losing their jobs. It gave them until July 29 to report their vaccination status to the city, and said vaccinations will be required once the vaccines receive full authorization — rather than their current emergency authorization — from the Food and Drug Administration.

Once full authorization is issued, likely in coming months, San Francisco city employees — including police and firefighters — will have 10 weeks to provide proof of vaccination, officials there said. Medical and religious exceptions will be made.

No such decision has been made in Los Angeles, though some officials have begun considering it as they watch vaccination and infection rates carefully and ponder new ways to combat the threat of new variants of the virus.

Asked about the conversation among Garcetti’s department heads, Alex Comisar, a mayoral spokesman, said it was simply a “conceptual conversation” about “improving vaccine uptake” among city employees.

“A broad range of ideas was discussed and we want to consider all strategies — but there is no imminent decision on a mandate of any kind,” Comisar said.

Alison Simard, a spokeswoman for Los Angeles City Councilman Paul Koretz, said the councilman has not ruled out the idea of mandatory vaccination for city employees but is not yet calling for the city to do so. Koretz heads a council committee focused on personnel issues.

With the rise of new variants, “people who are unvaccinated are still very susceptible and where we are now is not safe enough,” Simard said. At this point, “we’re looking at options to increase vaccination.”

Councilman Gil Cedillo said that mandating vaccination for city workers seems like “something we should be doing” amid the continuing pandemic.

“A mandate is appropriate if it is a condition of employment. Serving the city is a privilege,” Cedillo said in a statement. “In order to instill confidence in the people we serve, the public needs to know that the workers are able to serve them safely. We don’t want the public to be hesitant to seek services that they want and need because they don’t feel safe.”

Los Angeles Police Chief Michel Moore told the Police Commission on Tuesday that the discussion during Garcetti’s Cabinet meeting was largely focused on department efforts to encourage vaccination among employees, “while also considering alternatives such as a mandated program” like what San Francisco is putting in place.

Moore said he also spoke last week with San Francisco Police Chief Bill Scott, a veteran of the LAPD, about the efforts to get San Francisco officers vaccinated.

The LAPD hit a plateau with vaccinations months ago, with just over half of its workforce vaccinated. A similar percentage of city Fire Department personnel have been vaccinated. Those rates lag well below the overall vaccination rates among L.A. County and California adults.

Moore said infections within the police force have dramatically slowed, as they have in the broader population. However, one additional sworn officer was infected in the last week, more than 50 remain out sick with the virus, and two were just hospitalized due to respiratory issues, he said.

“We continue to stress the importance of this pandemic, that it’s not over,” Moore said.

Moore has not thrown his support behind a mandate but has said that he thinks a mandate for all employees would be better than one applied only to public safety workers such as police or firefighters.

Some ethicists and policing experts see a mandate for public safety workers making more sense given the employees’ regular interactions with members of the public, including those in vulnerable populations — some of whom cannot take the vaccine themselves.

The LAPD is supposed to be producing a report for the Police Commission on the considerations and legal issues related to a vaccination mandate for officers and on the current assignments of unvaccinated officers.

Both the police and firefighters unions have come out in opposition to a vaccination mandate, though both have said they are encouraging their members to be vaccinated and to talk to their doctors about any concerns they may have.

Mike Long, a spokesman for Service Employees International Union Local 721, which represents other city employees, said union officials “haven’t been approached with any discussion about a vaccine mandate” by L.A. officials.

He said the union local hasn’t staked out a position on a mandate but is committed to following best practices set out by health officials and guidelines from the state and the Centers for Disease Control and Prevention.

Charlie Munger says he's in love with Zoom, thinks the videoconferencing trend is here to stay