The second wave of ‘Star Wars: The High Republic’ novels is here. Here’s what to know. 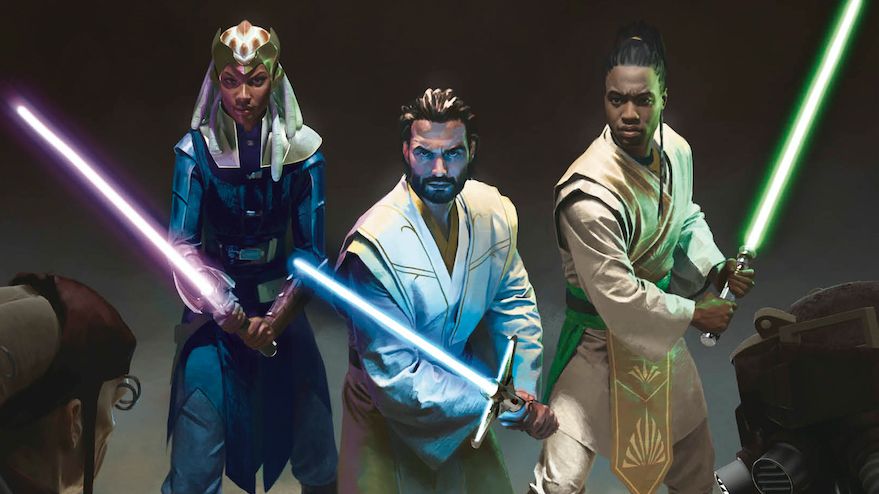 Earlier this year, Disney Lucasfilm Press rolled out the first wave of “Star Wars: The High Republic” books and comics that introduced a fresh roster of heroes and villains bounding and battling across the galaxy.

These intertwined “Star Wars” stories were spread across multiple publishing platforms and occurred during the Golden Age of the Jedi Knights when the light-sabered warriors were the legendary protectors of the Republic at its glorious height.

Now Disney has announced the next phase of this publishing endeavor that centers around the continuing saga set 200 years prior to “The Phantom Menace” by releasing covers, catalog descriptions, and on-sale dates for three more “The High Republic” novels serving the Middle Grade, Young Adult, and Adult markets.

Star Wars :The High Republic: Race to Crashpoint Tower:
$11.99 at Amazon (Save 20%)
Join Jedi Padawan Ram Jomaram on Valo, where he stumbles across a huge threat to the planet and Republic Fair, but can he make it to the titular tower?

Here’s the official description at StarWars.com:

“The Republic Fair is coming! Visitors from all over the galaxy are traveling to the planet Valo for a massive, awe inspiring festival celebrating the Republic. While his fellow Valons prepare for the fair, Jedi Padawan Ram Jomaram is hiding out in his favorite place: a dingy garage filled with mechanical parts and tools. But when a security alarm goes off on the nearby hilltop nicknamed Crashpoint Peak, he ventures out with his trusty droid V18 to investigate.

“There he discovers that someone has knocked out Valo’s communications tower—a frightening sign that Valo, and the Republic Fair, are in danger. Sure enough, as Ram races to warn the Jedi, the dreaded Nihil unleash a surprise attack! It’s up to Ram to face down the enemy at Crashpoint Tower and send a call for help to the Republic. Luckily, he’s about to get some assistance from unexpected new friends.”

Also being launched on June 29 is Del Rey Books is the Adult release, “The Rising Storm“ (Disney Lucasfilm Press, 2021) by acclaimed British author Cavan Scott, who was co-creator behind Marvel’s “The High Republic” comic book series that dropped earlier this year.

Star Wars: The Rising Storm (The High Republic): $20.28 at Amazon
Save 30% as you rejoin the heroes of the High Republic from “Light of the Jedi” as they head to The Republic Fair only to come face to face with the fearsome Nihil.View Deal

Per StarWars.com, the plotline unfolds as follows:

“Following the dramatic events of ‘Light of the Jedi,’ heroes of the High Republic era return to face a shattered peace and a fearsome foe. In the wake of the Great Hyperspace Disaster and the heroism of the Jedi, the Republic continues to grow, bringing more worlds together under a single unified banner.

“Under the leadership of Chancellor Lina Soh, the spirit of unity extends throughout the galaxy, with the Jedi and the newly established Starlight Beacon station at the vanguard. In celebration, the chancellor plans The Republic Fair, a showcase of the possibilities and the peace of the expanding Republic — a peace the Jedi hope to foster. Stellan Gios, Bell Zettifar, Elzar Mann, and others join the event as ambassadors of harmony. But as the eyes of the galaxy turn toward the Fair, so too does the fury of the Nihil.

“Their leader, Marchion Ro, is intent on destroying this unity. His storm descends on the pageantry and celebration, sowing chaos and exacting revenge. As the Jedi struggle to curb the carnage of the rampaging Nihil, they come face-to-face with the true fear their enemy plans to unleash across the galaxy — the kind of fear from which even the Force cannot shield them.”

Star Wars: Out of the Shadows (The High Republic): $14.30 at Amazon
Save 21% as you follow Sylvestri Yarrow as she tries to the keep her family cargo shipping business afloat and heads to Coruscant only to be waylaid by a galactic fued.View Deal

Check out the detailed synopsis from StarWars.com:

“Sylvestri Yarrow is on a streak of bad luck with no end of sight. She’s been doing her best to keep the family cargo business going after her mom’s death, but between mounting debt and increasing attacks by the Nihil on unsuspecting ships, Syl is in danger of losing all she has left of her mother. She heads to the galactic capital of Coruscant for help, but gets sidetracked when she’s drawn into a squabble between two powerful families over a patch of space on the frontier. Knee-deep in familial politics is the last place Syl wants to be, but the promise of a big payoff is enough to keep her interested.

“Meanwhile, Jedi Knight Vernestra Rwoh has been summoned to Coruscant, but with no idea of why or by whom. She and her Padawan Imri hitch a ride to the capital with Jedi Master Cohmac and his Padawan, Reath—and are asked to assist with the property dispute on the frontier. But why? What is so important about an empty patch of space? The answer will lead Vernestra to a new understanding of her abilities, and will take Syl back to the past…and to truths that will finally come out of the shadows.”