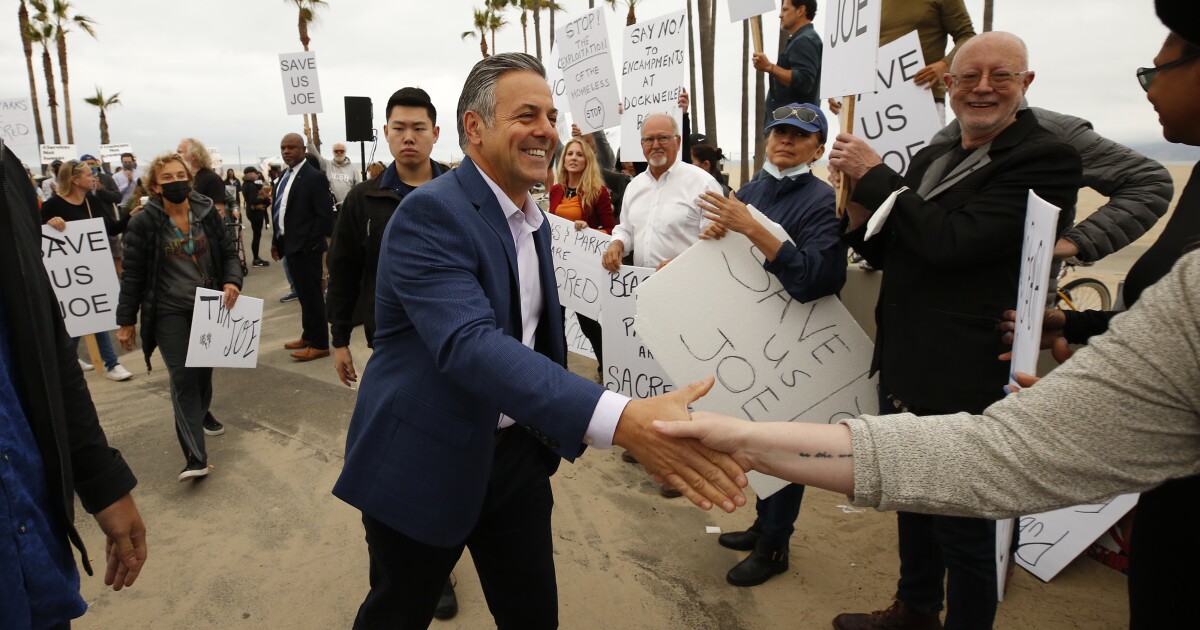 The Los Angeles City Council voted Tuesday to draft new rules barring homeless people from camping near schools, parks, libraries and other “sensitive” facilities, a sudden change in direction for a city struggling to address a humanitarian crisis while also restoring access to its public spaces.

On a 12 to 3 vote, council members asked the city’s lawyers to quickly draw up a law prohibiting sleeping, lying and storing possessions near a variety of public facilities, including public schools and homeless shelters. It also would bar tents and encampments from blocking sidewalks in ways that prevent wheelchairs users from traveling on them, in violation of the federal Americans with Disabilities Act.

The proposal, which is expected to face another vote on Thursday, had not been included on Tuesday’s council agenda or the accompanying documents. Council members had been scheduled instead to consider another anti-camping measure, one that was drawn up in October but failed to secure council support.

Backers of the new proposed ordinance described it as a humane alternative to the previous measure, saying it would limit the involvement of law enforcement, require 14 days notice that camping is barred in a particular location and seek to have homeless people comply voluntarily. But they also argued that it would help Angelenos regain public spaces currently occupied by tents, furniture or other possessions.

Three council members — Mike Bonin, Nithya Raman and Joe Buscaino — voted against the measure. Bonin said the city remains short of the 20,000 beds it needs to shelter its homeless population and argued that the council should first be presented a map showing where sleeping and camping would still be allowed.

Raman voiced similar fears. “Right now I feel like I’m making a decision on this law without the information I need to understand the impacts of this law,” she said.

Tuesday’s vote comes as council members are working to open shelter facilities, “tiny home” villages and permanent housing. The lengthy discussion, and the repeated calls for urgency from council members, also reflects how potent a political issue homelessness could be in the June 2022 election.

Buscaino, who is running for mayor, called on his colleagues last week to take up its eight-month-old anti-camping measure, saying they needed to act before the start of their monthlong summer break, which begins Friday. His proposal had already been set aside after several council members concluded last year that it was too broad.

Buscaino relied on an unusual procedural maneuver, asking his colleagues to pull the legislation out of the homelessness committee where it was still up for consideration — a transgressive move at City Hall, where committee chairs wield significant power.

That committee is headed by Councilman Mark Ridley-Thomas, who represents a district stretching from Koreatown to the Crenshaw Corridor and is a potential candidate for mayor himself.

Ridley-Thomas countered Buscaino’s request by offering up his own anti-camping measure — one supported by Krekorian, Council President Nury Martinez and several others. He argued that their alternative proposal is more compassionate and less punitive than the one favored by Buscaino, which was drafted last year in an attempt to comply with a 2018 federal court decision.

That ruling barred anti-camping laws from being enforced if a city has insufficient shelter.

Buscaino voted against the new measure, saying he doubted that the city’s lawyers would have a final draft ready before the summer break. But he promised to support it if the final legal language is ready on Thursday, the last day before the council’s recess.

Ridley-Thomas said his alternative measure offers the council “a new moment, a new possibility, a new level of decisiveness and enlightenment.”

Attorney Carol Sobel, who has been advocating for the rights of homeless people for decades, said she opposes both proposals. Most of the elected officials involved in Tuesday’s vote have presided over policies that made the problem worse, she said.

“If they found people safe places to live that didn’t warehouse them, then they wouldn’t need these ordinances,” she said. “But they are so focused on making homelessness a criminal matter, that they cannot think about positive ways to address this issue.”

Ridley-Thomas said his measure would ensure that public agencies thoughtfully engage homeless people and offer them housing options. City officials would need to craft a “street engagement strategy” within 30 days, one that would limit interactions between law enforcement and homeless people except in certain cases, such as when a crime is being committed.

The measure would prohibit sleeping and camping around licensed schools, preschools and daycare facilities.

In some ways, it would be more aggressive than Buscaino’s proposal, prohibiting sleeping and camping within 1,000 feet of a homeless shelter, instead of the 500 feet previously proposed.

On other levels, the measure backed by Ridley-Thomas would be more permissive. The proposal would eliminate language prohibiting people from sitting, sleeping or lying on a public sidewalk if they have already been offered shelter.

Councilman Bob Blumenfield, one of the authors of the original ordinance, said that provision was one of the reasons he and his colleagues deemed the original proposal too broad.

The proposal would also give the council the power to prohibit camping at locations that pose an ongoing threat to public safety due to fires, violent crime or other hazardous conditions.

Tuesday’s vote comes as council members are facing intensifying political pressure over their handling of homelessness.

Activists have been sharply critical of the city’s strategies for sheltering the unhoused, arguing that tiny homes are inadequate and that publicly funded hotels and motels impose curfews and other restrictions that make those facilities resemble prisons.

At the same time, neighborhood groups have voiced growing frustration over the number of encampments that are occupying public parks and, in some locations, stretch along sidewalks for multiple city blocks.

Six council members are running for reelection, and two others are seeking citywide office — Buscaino and Councilman Paul Koretz, who is running for city controller. Krekorian, Martinez and Councilman Kevin de León also have not ruled out a mayoral bid.

Councilman Gil Cedillo, who represents some neighborhoods on the Eastside, said he believed Buscaino’s “sense of urgency” had caused the council to move more aggressively in responding to the homelessness crisis.

Still, even with the new fast-track strategy, the new anti-camping measure may not go into effect for several weeks.

Unless Thursday’s vote is unanimous, the proposed ordinance would require a second vote. At that point, the council’s next meeting wouldn’t occur until the end of July.

The second wave of 'Star Wars: The High Republic' novels is here. Here's what to know.