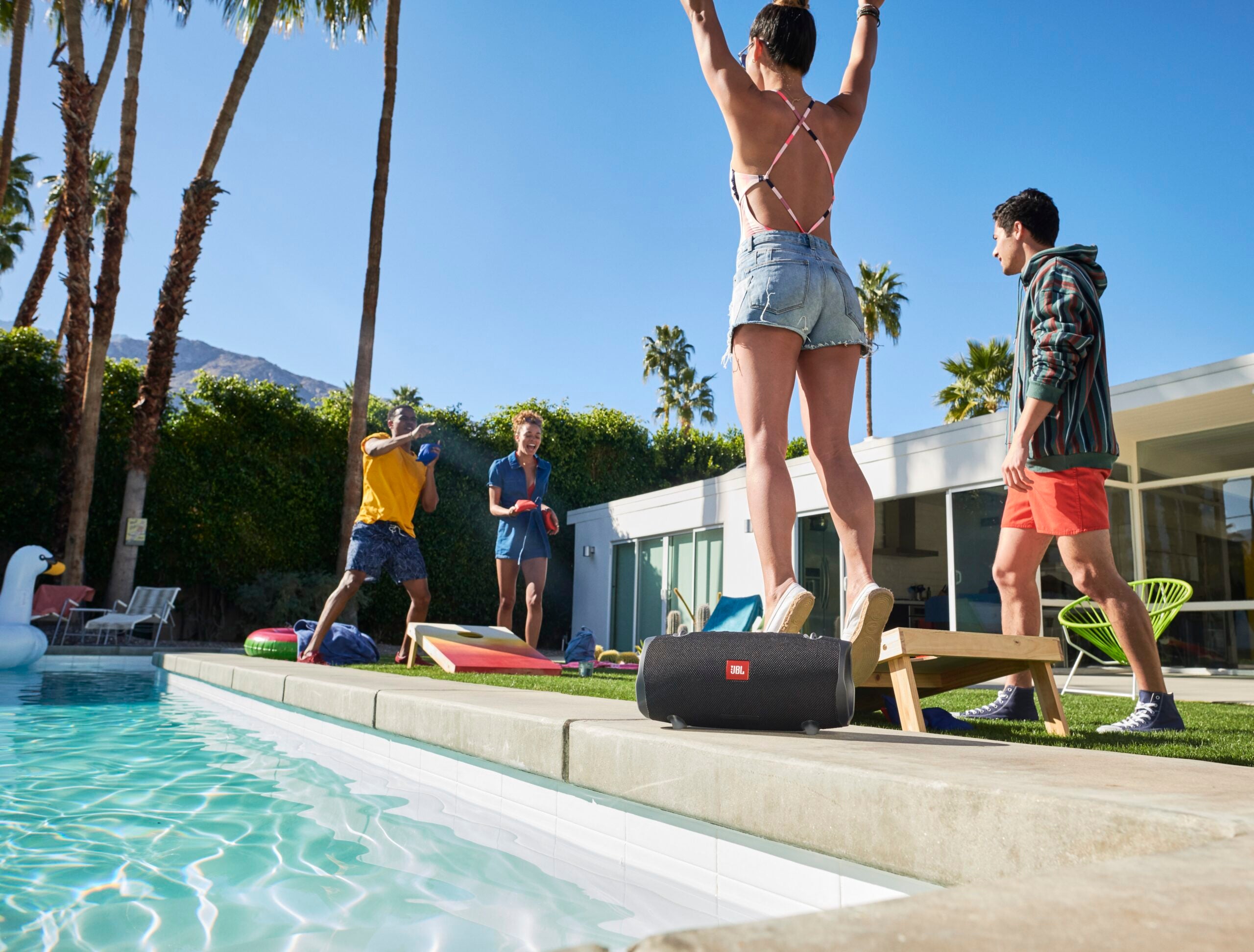 If you’ve ever seen a concert in a stadium or a movie in stadium seating, there’s a good chance you’ve experienced JBL audio. The company, founded in 1946, provided sound reinforcement for Woodstock (and countless shows since 1969). Decades later, JBL systems became the basis for the THX standard, which kicked off high-fidelity quality assurances in theaters and established JBL’s presence in many auditoriums. Our point is this: JBL had over half-a-century experience pleasing crowds when the company started producing portable Bluetooth speakers, and that tradition continued from the introduction of the first Flip in 2012 until today, over 26 models and 100 million units later.

The Flip wasn’t remarkable to look at. It was a cylinder, about the same as a tallboy of beer—pretty much what you’ve come to expect from countless brands (such as the Ultimate Ears speaker line). But this “party in your palm” caught on and, with each update, JBL’s Bluetooth speakers have become both more resonant and resilient.

We’ve had the chance to audition the full line of JBL wireless speakers, from the personal-sized Flip 5 and Charge 5 to the party-focused Xtreme 3 and Boombox 2, and can say these wireless outdoor speakers are satisfying across the board. But to help you figure out which JBL speaker is right for you, we’ve put together this roundup of the top models.

They say great music can take you on a journey, but sometimes you’ve already booked the trip and just need some tunes for the ride. With so many models to choose from, JBL’s speaker lineup has options to accompany you, regardless of your space and/or budget constraints. Here’s a brief overview of several models, highlighting their most relevant features. The list runs from smallest to largest in both size and price.

The Flip 5 is the size of a 16-ounce soda can and its sound is just as effervescent. Amazon

At just over a pound and, thanks to its size and shape, no harder to hold than your canned drink of choice, the JBL Flip 5 is a throw-anywhere go-anywhere speaker with a grippy texture and equally catchy sound. It’s rated IPX7, meaning it can be submerged in 1 meter of water for up to 30 minutes and survive. The battery life of 12 hours means you’ll need to leave the pool party before the Flip 5, and it can last on a long bike trip (plus it may fit in your bottle cage). And if you want to enjoy more sound without going up in size or price, you can pair Flip 5 speakers using PartyBoost—a feature shared by all the current-generation speakers shown here that lets you make stereo pairs or have up to 100 speakers play the same thing.

The Charge 5 kicks things up a notch with a bigger battery and deeper bass. Amazon

If the Flip 5 can be compared to a 16-ounce beer, then the JBL Charge 5 is an over-stuffed burrito. It packs improved Bluetooth (5 rather than 4.2), more dustproofing (IP67), a much larger battery, and increased bass than its smaller sibling. Claiming a 20-hour battery life, as well as a Powerbank feature that lets you charge another device over USB, the Charge 5 has an exclamation point embossed on its bass radiators and the sound to justify that emphatic punctuation. It delivers plenty of thump while removing more fear that it could get ruined rolling around in the sand or falling in the water.

The Xtreme 3 is slightly harder to carry but makes up for it with equally robust volume. Amazon

Unlike more grab-and-go models, the JBL Xtreme 3 is portable in the same way a messenger bag is. It’s a little over 4 pounds and comes with a rugged nylon strap (with built-in bottle opener) so you can sling it over your shoulder. What you’re taking with you, however, is up to 15 hours of hammering peak-hour Bluetooth 5.1 audio, assuming you don’t drain the Powerbank (there’s also 3.5mm aux input, just in case you’ve got a device that doesn’t play nice with wireless). It looks like the Charge 5 on steroids and sounds like it, too. The speaker reproduces thick, rumbling, authoritative basslines, and the IP67 waterproofing means the beats can continue to rain (reign?) down even if the skies do.

With the Boombox 2 you can bring the club home…to yours and your neighbors, too. Amazon

The 13-pound JBL Boombox 2 isn’t the biggest speaker in the company’s line, but it is the largest we can reasonably call “portable” for the average partygoer. With a molded handle built in, IPX7, and 24 hours of battery life, the Boombox 2 can occupy any space in which you want to rattle some tectonic (or dinner) plates. Thunderous lows come in seismic waves, but with plenty of presence in the mids and highs to maintain its sonic composure. There’s Bluetooth 5.1, a 3.5mm aux input, and the same Powerbank and PartyBoost features as other models (though linking two of these might be too intense for anyone but the most hardcore). However, make sure you book time, and a convenient wall plug, well before it’s time to transport the visceral thrills, as the Boombox 2 takes 6.5 hours to charge and uses an AC adapter instead of USB (unlike the models above).

What about the JBL PartyBox speakers?

While JBL’s portable Bluetooth speakers are accomplished in their own right, there’s a next level to the company’s party speakers that truly leverages JBL’s history in concert PAs. From the $499 240W JBL PartyBox 310 to the $1199 1100W JBL PartyBox 1000, the top line of JBL high-power wireless speakers packs in light panels and expanded connectivity you can wheel in to form the centerpiece of an expansive, expressive backyard party. Good for DJs, karaoke, or a small musical performance, these speakers feature Bluetooth 5.1, the ability to play digital files off of USB drives, as well as 3.5mm aux and ¼-inch mic/instrument jacks. You can daisy chain speakers with a cable, or pair two wirelessly for a stereo presentation. While the JBL PartyBox 1000 adds even more inputs, built-in effects, and even a bass boost, in case excessive isn’t enough.

JBL has over a decade in the portable personal audio market, and each generation of the company’s wireless outdoor speakers keeps them in the conversation for best Bluetooth speakers. The company’s speakers get increasingly more durable, the Bluetooth signal gets stronger, while the sound manages to be bigger without becoming unbalanced. If you want to increase the volume but don’t want to replace the speakers you already have, you can connect any of the current models—Flip 5, Charge 5, Xtreme 3, and/or Boombox 2—interchangeably.

JBL’s portable Bluetooth speakers share a design language that’s meant to cry out “Excitement!” Emphasis on that exclamation point, which is in the central JBL logo, as well as seen pumping on the bass radiators. The company offers bold colors and patterns on most of its stock speakers, as well as the ability on its website to personalize—for a small surcharge—the Flip 5’s casing color and woven fabric (you can even upload your own image to be wrapped around the speaker).

The silhouette of the Flip 5, Charge 5, and Xtreme 3 can be simply described as “log.” This isn’t industrial design; it’s functional but flashy. The Boombox 2, well, markets itself. If you lived through the ’80s or early ’90s, or sat through many a movie set in the ’80s or early ’90s, you’ll feel a tinge of nostalgia for the image of grabbing a boombox by the handle on your way to a back-alley dance battle. All models share a set of rubberized buttons for power, pairing, play/pause/skip, volume, and PartyBoost.

As for the PartyBox series, those are colorful columns that stand out in stature and hue as they sync their lights to the beat.

Which JBL portable Bluetooth speaker is best for you?

Since JBL’s speakers all sound great, which one is right for you ultimately comes down to how big a budget and/or party you have. For just $119, the Flip 5 is budget-friendly and small enough to fit any bag (while sounding good enough to match any mood), but it’s best for an intimate gathering—a few people poolside, fireside, etc.

The Charge 5 costs a little more and is a little less compact, but packs a lot more sound and battery life, making it a great investment and possibly the best Bluetooth speaker for the beach or casual backyard BBQs. The Xtreme 3 takes up more space in transit, but its sound is even more transportive so it’s certainly in the equation if you’re having the neighbors over, too. And the Boombox 2, well, it adds a lot of bulk but so. much. boom. Its wireless range, without any obstructions, is almost as tremendous as its ability to be cranked up without distortion. Unless you really plan to move a crowd, Boombox 2 is more than intense enough for meaty meet-ups in wide yards and warehouses without sacrificing portability like you would when you move up to the PartyBox 310 and 1000.

Will L.A. require city employees to get vaccinated?