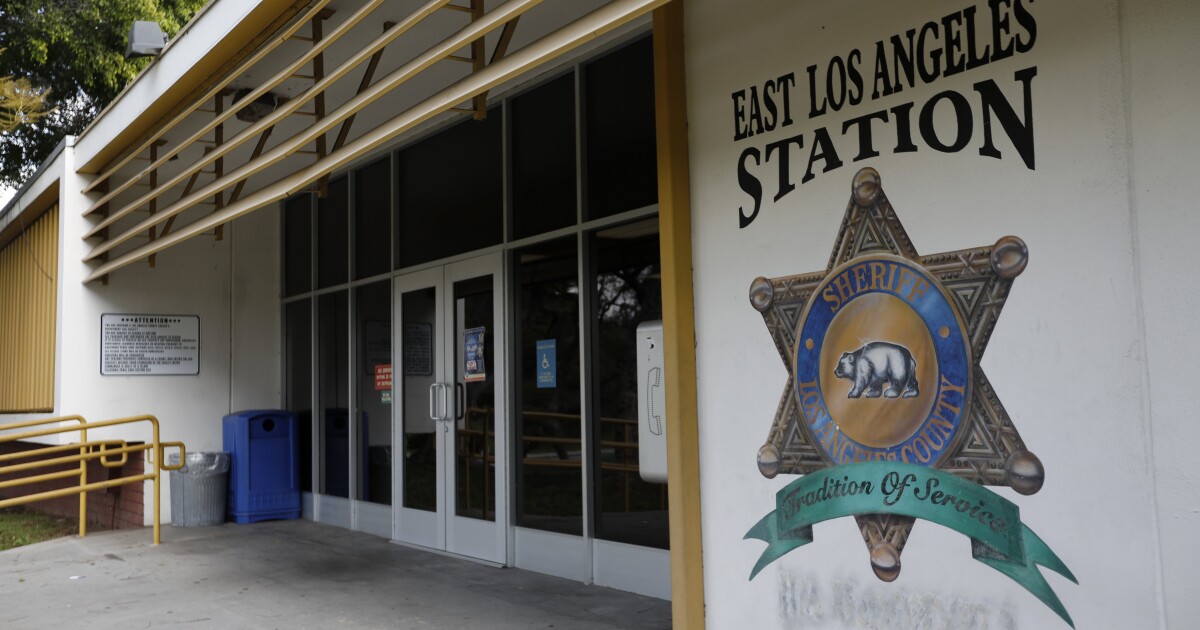 Los Angeles County Sheriff Alex Villanueva has repeatedly touted what he says was his first act in office in December 2018: removing the captain of East L.A. station, where a group of tattooed deputies known as the Banditos ran roughshod and dictated where deputies would be assigned.

“The entire leadership of East L.A. station was turned over,” Villanueva said in a social media broadcast last fall. “And that was on purpose because they had failed in their job to lead the station.”

Villanueva has said he transferred 36 people out and brought a new captain, Ernie Chavez, to the helm of the station to quell the Banditos problem. But new court documents that include sworn testimony from Chavez raise questions about and at times, contradict the sheriff’s claims.

Chavez said he was not told why he was being moved to the station and that he never made an effort to identify who belonged to the Banditos. He said that Villanueva did not discuss the problems at the station with him.

“I don’t know who the Banditos are,” Chavez, who is now a commander, said under oath in March.

Villanueva did not respond to questions about the discrepancies. The Sheriff’s Department cited pending litigation and declined to comment other than to say Villanueva “has done more to address organizational culture issues than all of his predecessors combined.”

Excerpts of Chavez’s testimony were made public as part of a lawsuit brought by eight deputies who say they were routinely harassed by a gang of predominantly Latino deputies who have matching tattoos of a skeleton outfitted with a sombrero, bandolier and pistol.

“Did you investigate the Banditos?” asked Vincent Miller, an attorney representing the eight deputies, according to a transcript of the deposition excerpts.

Later he was asked: “To your knowledge, you were not brought in to quell the Banditos situation, correct?”

Chavez also said the 36 people moved from the station reflected general transfers, retirements or promotions, not a response to allegations centered around the Banditos.

“Is that an incorrect statement by Sheriff Villanueva that he transferred 36 people?” Miller asked.

“Based on the information that I have, that is incorrect. Those 36 individuals would simply reflect general transfers,” Chavez responded. Chavez said he left East L.A. station in November 2019 after his promotion to commander.

At at Civilian Oversight Commission meeting in May, Villanueva said the Banditos clique “no longer exists” at East L.A. station.

“They have been broken up in accordance to the law, and constitutionally permissibly,” he said.

But the eight deputies this week filed an updated lawsuit with new allegations, including that the Banditos recently had an inking party where 10 deputies were tattooed, raising the total number of members to 100.

“The Banditos gang has controlled the East Los Angeles station like inmates running a prison yard,” the lawsuit says.

Deputies who are members have adopted gang expressions, the lawsuit says. When one says that a person is “in the car,” it means that person is one of them. They use “word on the yard,” a phrase used to explain what is being said among people in prison, according to the lawsuit.

The lawsuit says Banditos are given preferred parking spots at the station and collect “taxes” from young deputies, including through a recent fundraiser to help four of them pay for legal expenses related to these claims.

Going back to 2016, the lawsuit alleges, the Banditos repeatedly denied backup to the plaintiff deputies on dangerous calls, pressured them to quit or leave the station and sent hostile messages on work computers. It also alleges that the Banditos once secretly removed ammunition from another deputy’s shotgun.

In September 2018, two deputies were knocked unconscious at a department party at an event space called Kennedy Hall, the lawsuit says. The incident was the focus of two internal Sheriff’s Department investigations — one of which Villanueva has said led to the discipline of 26 employees — as well as a report by the Office of Inspector General.

The updated lawsuit cites text messages between a group of deputies after the incident in which one jokes about the “245″ at the party, referring to the penal code section for assault. In screenshots of the messages obtained by The Times, others joke about evidence, advising each other to “get rid of it” and “burn it.”

The inspector general’s report last year said there’s substantial evidence that the Banditos are “gang-like and their influence has resulted in favoritism, sexism, racism and violence.”

Villanueva has said he’s the first sheriff to have implemented a policy that prohibits membership in illicit groups.

“A new policy is meaningless if you don’t actually enforce it,” said Miller, the attorney representing the deputies. “It’s just smoke and mirrors, it’s just a pretend at reform.”

Australia’s renewed lockdowns are a warning sign for the US

L.A. has no seasons, you say? Wrong. Here's how to mark them