Firefighters work hard to keep up with California fires 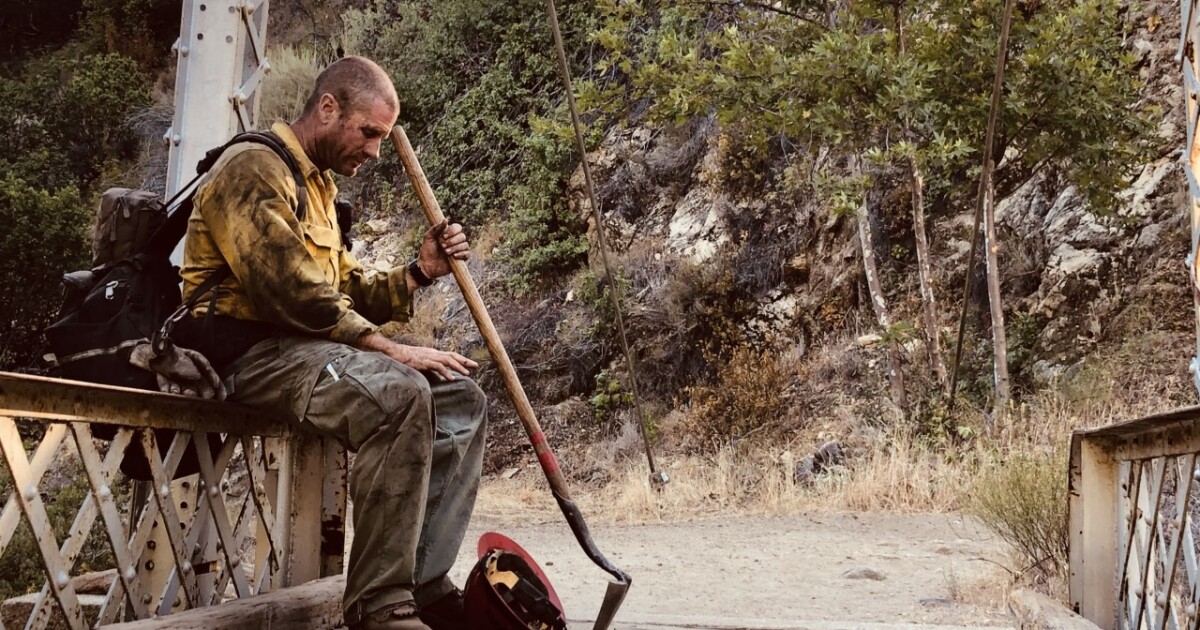 With fire season beginning earlier every year, blazes are burning across California even before the official start of summer and firefighters are already working relentlessly to protect the state’s wildlands.

A photograph posted on Twitter by the Los Padres National Forest that since has gone viral shows just how hard fire crews are working.

An image of Capt. Justin Grunewald, a firefighter with San Bernardino County’s Mill Creek Hotshots who was battling the Willow fire near Big Sur, has received more than 9,000 likes on Twitter and has been shared more than 2,400 times.

The image, captured by Hotshots colleague Capt. Lincoln Peters and published on Thursday, shows Grunewald sitting on a railing of the Horse Bridge near the Arroyo Seco Campground. Grunewald is covered in soot, his fire helmet resting upside-down at his feet and his shaved head bent forward as he seemingly gathers his strength for a return to the front lines of the fire.

The Willow fire ignited around 8 p.m. June 17, forcing evacuations. In 13 days it has charred 2,877 acres, according to the U.S. Forest Service’s incident report.

“The first several days were entirely an air show,” Forest Service spokesperson Lynn Olson said Tuesday. “Most of the work was done by helicopters … dropping water on the fire.”

Firefighters — including Grunewald and Peters’ crew — were then tasked with scraping containment lines around the blaze. “Not only are they doing this grueling work, they’re doing it with a 50-pound backpack,” Olson said. “These men and women are extraordinarily strong and dedicated.”

Neither Grunewald nor Peters was available to comment on the photograph or their work on the fire. But the heroic efforts of the firefighters haven’t gone unnoticed in the Twitterverse.

“Respect to those who fight the fires in our country, thank you for your service,” Lee Morin tweeted, one of many messages of support left in the replies.

“We think we know how hard they work. But I am sure that what we imagine, doesn’t even come close to reality,” a user identified as Renee wrote. “Much gratitude to our firefighters!”

Although the Willow fire has scorched a swath of wilderness in the Los Padres National Forest, no structures have been damaged. Closures because of the fire are still in place, however, including the area around Arroyo Seco recreation and the eastern end of Pine Ridge Trail, Olson said. The blaze was 87% contained as of Tuesday, and fire officials have estimated July 11 for the blaze to be fully contained.

The fire is one of more than a dozen burning in California amid the acceleration of the state’s drought conditions and record-setting heat blanketing the West.

Officials are warning residents to use extreme caution amid bone-dry conditions that are primed to erupt into fuel for wildfires.

“Make sure that if you’re going into a recreation area that accommodates boats or trailers that you’re not dragging chains, that you don’t have a campfire, that you don’t park your car where a hot catalytic converter could catch dry grass on fire,” Olson said.

And as the Fourth of July approaches, Olson reminded campers and hikers that fireworks are not permitted on any U.S. forest property.

“The No. 1 thing that the public can do to help is not be a part of starting fires.”

Best Budget Headphones: How to Hear More for Less