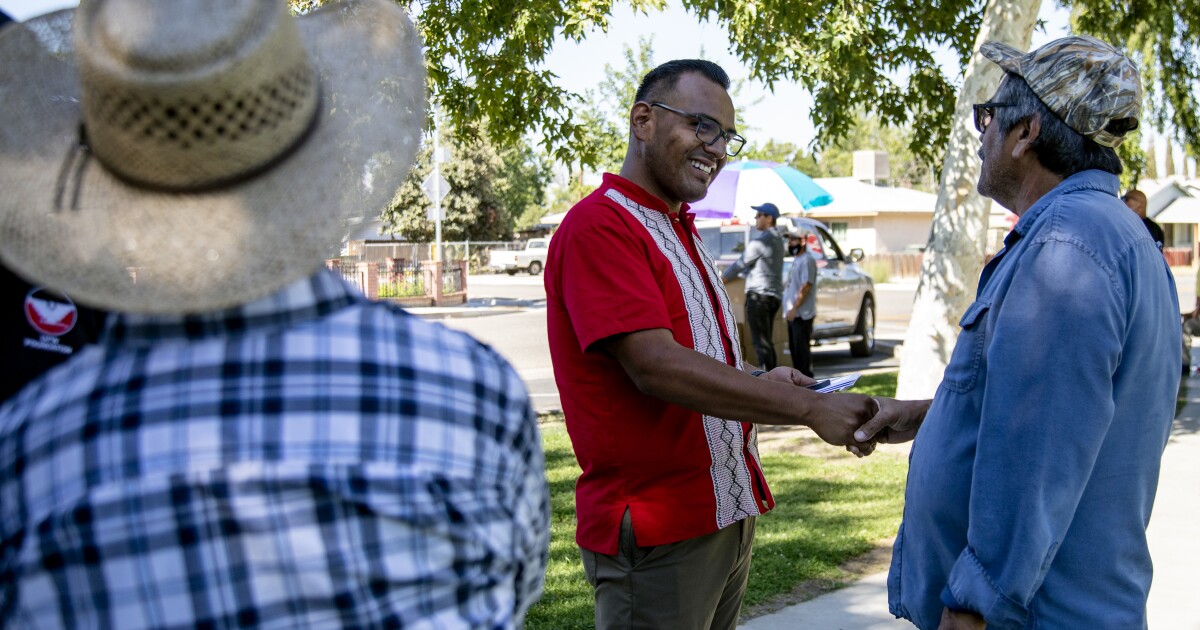 The mayor of Wasco wore the standard summer outfit for Chicano nerds when he showed up at La Imperial Taqueria in downtown for breakfast last week. White guayabera. Shined shoes. Perfectly coiffed hair. Checkered socks. Black-framed glasses. Ironed khakis with creases so sharp you could shave off of them.

Alex Garcia, 31, rounded out his ensemble with an enamel pin of the rainbow flag clasped on his chest. Its symbolism was threefold.

June is Pride Month, of course, and Garcia is the first-ever openly LGBTQ elected official in the history of Kern County. But the bauble banner also represented a recent defeat Garcia doesn’t want to forget.

The previous week, he had proposed during a City Council meeting held over Zoom that the self-proclaimed Rose Capital of the World fly the pride flag at City Hall. The mayor hoped to ride a wave of LGBTQ activism this past month that had splashed across the famously conservative Central Valley and sent its political class buzzing.

Fresno flew the pride flag for the first time, as did Delano and Selma. There were Pride Month celebrations in rural towns like Tehachapi, at community colleges and even in the Forty Acres National Historic Landmark, the former headquarters of the United Farm Workers. The push came from grass-roots activists but also young, progressive Latino council members forged in the fights for Bernie Sanders’ presidential campaigns.

Garcia hoped that goodwill might lift up his pride flag resolution at the June 16 council meeting. Instead, speaker after speaker blasted him for even bringing up the subject. They accused him of bigotry against religious communities, of hating the American flag and self-serving politicking.

When it came time to decide, Council Member Vincent Martinez was the only one who spoke. He said that while he was all for diversity, the flag issue “has brought unwanted attention to our city over something that is symbolic.” Martinez and the two other council members present voted against the mayor’s resolution.

“I knew I had to remain steady and stoic,” Garcia said, tapping the table with his index finger for emphasis. “I do cry behind closed doors. But there were other matters to deal with that night. Like having to deal with a new contract with the [Kern County] sheriff’s department that’s going up by a million dollars. People were more distracted by a vote over a flag than that.”

Two days after the council vote, about 50 supporters staged a Pride rally in front of City Hall. Former residents from as far away as Sacramento drove in to show support. Garcia received a torrent of texts and emails applauding his lonely stance.

Garcia lost his battle, but he and his fellow pro-LGBTQ advocates just might win the proverbial war to transform the Central Valley from a redoubt of red into something bluer.

“Having a movement alone is amazing and inspires the community to mobilize,” 23-year-old Delano resident Marivel Servin said. “But having politicians stand and vote in solidarity validates the asks of groups and makes it easier for progress to happen.”

Kingsburg City Council Member Jewel Hurtado, who identifies as bisexual, also pushed for her city to fly the pride flag. When that failed, she helped to organize a Pride festival attended by hundreds — the city’s first.

“What Alex and I tried to do isn’t just about a flag,” the 22-year-old said. “There’s a quote by Cesar [Chavez] that I keep telling myself: ‘The fight is never about grapes or lettuce. It is always about the people.’”

The efforts by Garcia, Hurtado and others have impressed Chicano veterans of the region’s past bare-knuckle political fights.

“There was going to be an issue where the new guard was going to bump up against the old guard, and this one seems to be it,” said 37-year-old Andres Chavez, grandson of Cesar Chavez and director of strategic initiatives for the Cesar Chavez Foundation. “It’s wonderful. We’re moving into these political arenas that we only thought we might get into.”

“These changes are going to happen up and down the valley,” said Matt Muñoz, who co-hosts a weekly radio show with Chavez. His late father, Arturo, was the first Latino council member in McFarland. “The ball is already rolling, and the political machines that have run things for so long better be ready.”

Garcia still can’t believe the events of the last two weeks — not the rejection of his pride flag move, which he expected, but that it could even be discussed.

“I used to think I could never be an elected official here,” Garcia said. “An elected official in Kern County? I’m gay. I’m brown. I remember when I graduated from high school, I was like, ‘I’m outta here, I never want to come back.’ So what’s happening across the valley is incredible.”

The grandson of Mexican migrants, Garcia remembers a childhood of bullying at school that pushed him away from Wasco to try and start a new life somewhere, anywhere.

Garcia majored in political science at Fresno State before leaving to Las Vegas, where he volunteered for Barack Obama’s 2012 presidential reelection campaign. A union job took him to Phoenix and San Francisco to advocate for healthcare reform.

“I’d be in these working-class communities, and I found myself trying to fix the same problems we have back in Wasco,” he said. “So I had to ask myself, ‘Why am I trying to improve other places instead of where I’m from?’”

Garcia returned home in 2015 and won a City Council race the following year, becoming the youngest-ever council member at 26. He admits to spending his first term — which included a year as mayor — trying to address every issue except LGBTQ ones.

But after easily winning reelection last year, and getting reappointed as mayor at the beginning of this one, Garcia realized he held a prominent platform in a region where LGBTQ visibility was nonexistent until just recently.

“It’s a fight for our survival in these rural communities,” he said. “That’s not hyperbole. I needed to speak up.”

He first wanted to light up Wasco’s water tower in rainbow colors, but city staff pointed out it would cost thousands of dollars because the illumination system needed repairs. “That’s when I decided on a flag. I could buy it with my own money for like $10.”

He plans to fly it at his house and wait for next year.

In the meanwhile, Garcia is hoping to help establish a gay-straight alliance club at his alma mater, Wasco High, while continuing to try to stop his city’s brain drain, which nearly took him for good.

“Wasco is a good, loving community at its core,” he said. “But we can always do better.”

Garcia got up from our table to take two guests around downtown. He adjusted his pride pin.

“There’s a saying I like that keeps me rooted,” he said. “Plant the seed to grow the tree that’ll offer the shade that you’ll never get to enjoy.”

He realized that sounded nerdy, so Garcia followed up with something sharper.

“Out here in rural Kern, we hold it down.”