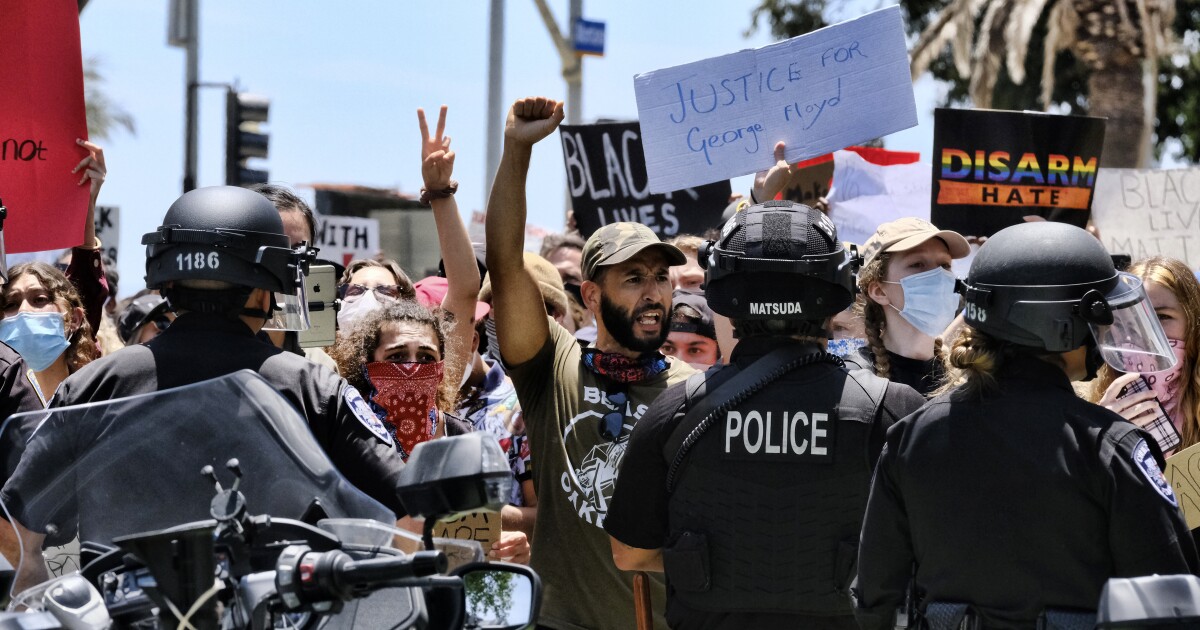 Black Lives Matter Los Angeles and other protesters filed a federal lawsuit this week against the city of Santa Monica over its response to the mass demonstrations that followed George Floyd’s killing in Minneapolis last year.

The lawsuit, which was filed Monday and seeks class-action status, accuses the city and the Santa Monica Police Department of using excessive force against protesters, arresting them without justification and subjecting them to inhumane conditions while detained.

It also alleges that the department unjustly focused on peaceful protesters while ignoring individuals who were burglarizing stores and committing other crimes nearby, and misused emergency curfew orders to clear the streets of legitimate demonstrators.

“By preemptively banning peaceful assemblies, kettling the demonstrators, subjecting them to unlawful force, arresting and detaining them tightly handcuffed on buses for hours, without access to bathrooms, water, or food,” the city violated the protesters’ constitutional rights, the lawsuit claims.

Constance Farrell, a spokesperson for Santa Monica, said the city was reviewing the lawsuit but had no comment on its claims.

The lawsuit is similar to a class-action lawsuit that BLMLA and other protesters filed against Los Angeles over the Los Angeles Police Department’s handling of L.A. protests during the same timeframe, in late May and early June of last year.

Floyd died in May 2020 after being arrested by Minneapolis police and held on the ground with a knee in his neck by former officer Derek Chauvin, who was recently convicted of murder in the case and sentenced to 22 1/2 years in prison.

Floyd’s killing sparked protests across the country and world, and tens of thousands of demonstrators took to the streets in the L.A. region to voice their outrage. The protests spiraled out of control in downtown L.A., in the Fairfax District, in Santa Monica and other areas as police in riot gear formed skirmish lines opposite protesters and others in the crowds burglarized stores and set fires.

Curfews were established across the region, the National Guard was brought in, and police made thousands of arrests and used projectile weapons to clear the streets.

In Santa Monica, where the unrest largely occurred May 31, many boutiques and shops were burglarized. The city counted 178 incidents of nonresidential “looting,” 49 incidents of vandalism, 10 assaults on officers, 18 damaged police cars, 12 arsons, 17 aggravated assaults and nine burglaries associated with the unrest that day, among other crimes.

On Oct. 21, just a few days before she retired, then-Santa Monica Police Chief Cynthia Renaud — also a named defendant in the new case — wrote in a letter to the community that the department had been “resourced and trained to handle protests and riotous activity that might erupt from within that protest,” but were not prepared to deal with a third and simultaneous component: organized criminals.

“Massive groups of extremely organized individuals, who were unassociated with the protests, committing highly mobile, well-coordinated looting at multiple locations throughout the city” had “taxed the Department’s resources in the initial hours of its instigation,” Renaud wrote.

Amid the chaos, police made hundreds of arrests, but many were for curfew violations, not for crimes like burglary or arson.

In its lawsuit, BLMLA claims that SMPD and other police that descended on the city through mutual aid agreements with the SMPD abused their power by indiscriminately arresting people just for being outside, even when individuals who posed a greater threat to the community were not pursued and even though many of the people outside had been caught off guard by a curfew that was moved up by hours without their knowledge.

David Brown, a Santa Monica resident, alleges he was peacefully protesting when he was arrested on the street and struck with batons. He alleges he was taken to a makeshift jail at the Santa Monica Airport and left in a cell with no access to food, water or a bathroom for hours — then cited for a curfew violation and driven to L.A., where officers told him not to reenter Santa Monica despite living there.

“Mr. Brown wants to be able to engage in peaceful protest in the City in the future, without concern or fear that he will be arrested again, particularly by his mere presence in the City where he lives,” the lawsuit states.

Kerry Hogan, another protester, alleges she was on her knees peacefully protesting and unaware that the curfew had been moved up by several hours when someone else threw a water bottle in the direction of officers and the officers opened fire on the crowd with projectiles , striking her in the ribcage as she got up to leave.

“The response from law enforcement was immediate and unwarranted, firing [projectiles] indiscriminately into the group of protestors even though a single person threw a bottle, and even though the protestors, as a group, posed no threat of immediate violence,” the lawsuit claims.

As with its case against the city of L.A., BLMLA brought the Santa Monica lawsuit in part because it wants the federal court to step in and restrict the SMPD from operating in similar ways during future protests.

“BLMLA intends to assist, plan, participate in and hold similar events in the future, on its own or in conjunction with others, and fears that the same unlawful police actions in response to protests of institutional racism and police brutality will be repeated absent injunctive and declaratory relief to prohibit the practices, policies, and customs that caused the unlawful action in response to the recent protests,” the lawsuit states.

In addition to the city of Santa Monica, the lawsuit names former SMPD chief Cynthia Renaud as a defendant in the case — claiming Renaud’s mishandling of the protest was the reason for her departure from the department, and alleging that the department and Renaud had “failed to enact necessary policies and to train officers in lawful responses to peaceful protests.”

U.S. stock futures are little changed as the market closes out a winning first half