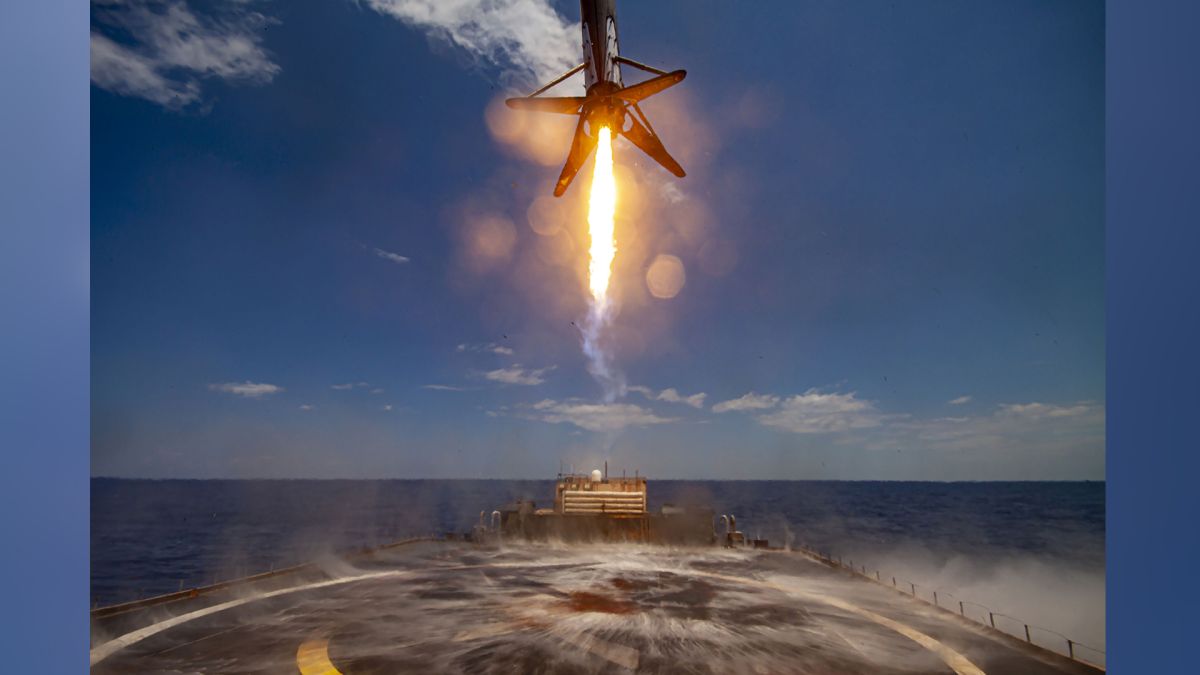 SpaceX’s latest rocket landing on a drone ship was so smooth that if you blink while watching the video, you could miss the touchdown.

SpaceX posted the five-second clip on Twitter on June 21. In the video, a Falcon 9 rocket’s first stage successfully kisses the deck of the Just Read the Instructions drone ship on June 17, off the coast of eastern Florida. Minutes before, the rocket successfully boosted the GPS III SV05 navigation satellite to orbit, for the company’s 19th launch of the year from the Space Coast.

If the video zipped by a little fast for you, SpaceX also released some high-definition still shots on Twitter showing the rocket’s first stage — orange flame glaring below — hovering and landing aboard the drone ship in the Atlantic Ocean.

SpaceX also posted more views of the mission taken from orbit, showing the Falcon 9’s second stage Merlin engine, backdropped by Earth, and from the launch area at the recently renamed Cape Canaveral Space Force Station, showing the Falcon 9 soaring high in the seconds after liftoff.

The GPS III SV05 satellite mission is the second SpaceX mission so far in June, following the launch of a broadband satellite for Sirius XM on June 6. It also was the fourth GPS satellite delivery by SpaceX for the U.S. military, after three previous GPS III missions also launched on Falcon 9 rockets. (Another GPS III satellite launched in August 2019 on United Launch Alliance’s final flight of the Delta IV Medium rocket.)

This generation of upgraded GPS satellites includes more robust anti-jamming capabilities and more accurate signals to eventually replace the capabilities of the navigational satellites that are aging in orbit after launching two decades ago, according to manufacturer Lockheed Martin.

SpaceX’s next launch from the Space Coast is scheduled for Tuesday (June 29) during an hour-long window that opens at 2:56 p.m. EDT (1856 GMT). The operation will see a Falcon 9 rocket loft the Transporter 2 rideshare mission. SpaceX’s next crewed launch is the all-civilian Inspiration4 mission, which will launch from the same location in September.