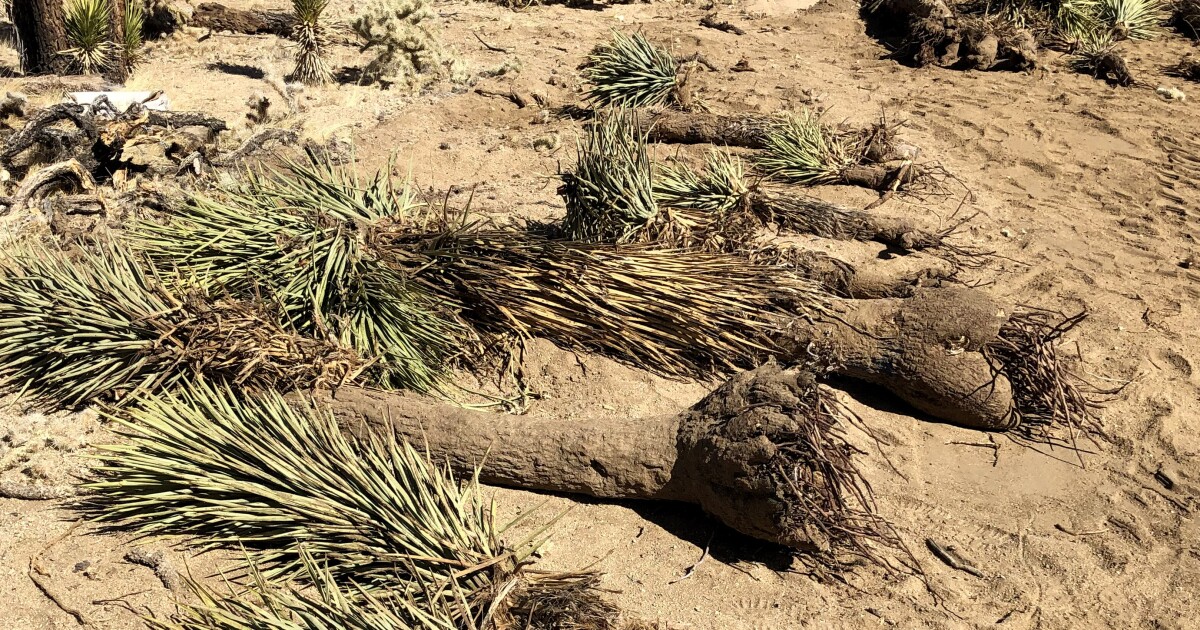 A couple who bulldozed and buried 36 Joshua trees to make way for a home were recently fined $18,000 — a punishment authorities hope will deter others from destroying the iconic trees.

“I would hope that the person that would otherwise take, remove, bulldoze a Joshua tree would understand that they are facing fairly significant criminal liability for doing so,” said Douglas Poston, supervising deputy district attorney with the San Bernardino County district attorney’s office.

An investigation into the destruction began Feb. 11, when a Morongo Basin resident saw his neighbors using a tractor to mow down dozens of the twisted, bristled trees and reported it to the California Department of Fish and Wildlife through a tip line, wildlife officials said.

Not long before, the neighbor — who was not identified — noticed the trees were marked for removal and warned Jeffrey Walter and Jonetta Nordberg-Walter not to take them out.

The western Joshua tree is a candidate for protection under the California Endangered Species Act. It is illegal to cut down, damage or remove the sensitive desert tree without a permit while they’re under review for more lasting protection.

According to Poston, the couple believed that small trees, under a certain diameter, could legally be removed. The two own the land where the trees were and planned to build a home on the lot.

“But that’s not accurate, obviously,” he said. “It doesn’t matter if it’s a foot tall or 20 feet tall, it’s under that protection.”

By the time a state wildlife officer arrived at the scene, three dozen Joshua trees were buried in a “giant hole” that was freshly covered over, according to Patrick Foy, a captain with the state Department of Fish and Wildlife’s law enforcement division.

Ultimately, the owner-developer couple rehired the backhoe operator who had buried the trees to dig them back up.

The county district attorney’s office filed 36 misdemeanor charges against Walter and Nordberg-Walter, one for each destroyed tree. Each charge carried a fine up to $4,100 and/or six months in jail.

On Tuesday, a judge placed the couple in a diversion program. As part of their agreement, each agreed to pay $9,000 in fines.

A portion of the overall fine has been paid, and the Walter family can earn credit toward it by completing volunteer work for Joshua Tree National Park or the Mojave Desert Land Trust, according to a news release.

The flora has enjoyed legal protection for nearly a year.

In September, the California Fish and Game Commission granted the trees temporary endangered species status after environmentalists petitioned for its protection. Supporters say the species faces the threat of extinction amid climate change, wildfires and habitat destruction from urban sprawl.

A yearlong review process is underway, and a final decision by the commission is expected this year.