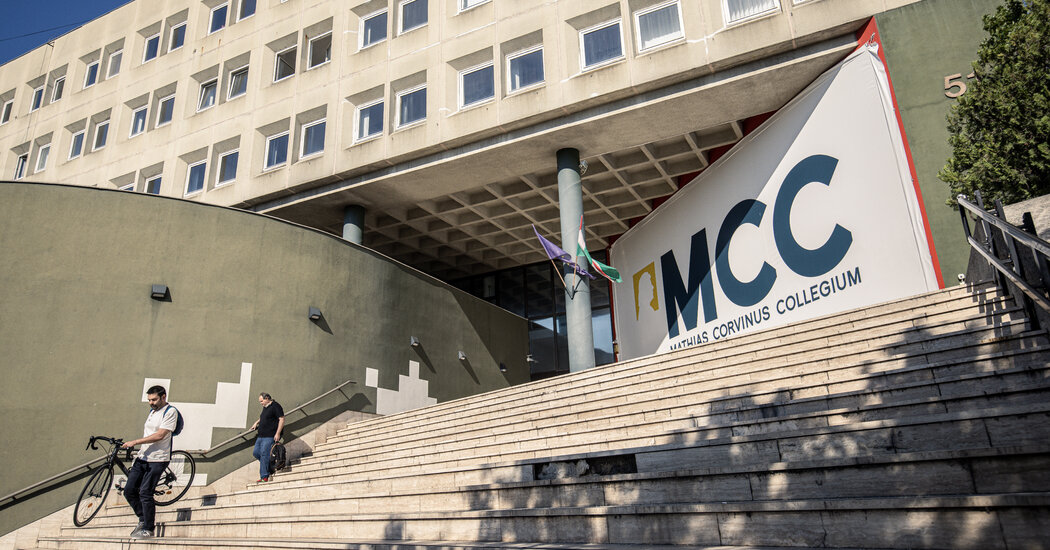 BUDAPEST — On a leafy hilltop in Budapest, a small educational foundation inside an aging, former Communist police building has audacious plans to train young “patriots.” It is constructing a colossal campus, wooing conservative intellectuals for the faculty and expanding its programs to train 10,000 students across Hungary and elsewhere in Europe.

The price tag is expected to run into many millions of dollars, but money isn’t a problem: The foundation, Mathias Corvinus Collegium, or M.C.C., was recently granted more than $1.7 billion from a powerful benefactor: Hungary’s prime minister, Viktor Orban.

A hero to Europe’s far right, Mr. Orban says he wants to overhaul education and reshape his country’s society to have a more nationalistic, conservative body politic. But his critics argue that the donation is legalized theft, employed to tighten Mr. Orban’s grip on power by transferring public money to foundations run by political allies.

Even for Mr. Orban, who has persistently flouted democratic norms, it is a brazen move, especially as Hungary’s health system is underfinanced and buckling under the strain of Covid-19. The $1.7 billion transfer to the educational foundation is about 1 percent of the country’s gross domestic product. The foundation now controls assets worth more than the annual budget of the country’s entire higher education system.

“This is not about Hungarian higher education,” said Istvan Hiller, a lawmaker from the opposition Socialist Party and former education minister who now serves as a deputy speaker of Parliament. “This is about building a foundation to solidify power.”

Mr. Orban has dominated Hungarian politics for more than a decade, walking a delicate line with European Union leaders, who for the most part have tolerated his excesses. But he is now under growing pressure in Europe, where one leader has openly questioned whether Hungary should remain in the bloc, and in Hungary, where his popularity has suffered from his government’s handling of the coronavirus pandemic.

Mr. Orban will seek a fifth term in 2022, facing off against a newly unified opposition and the possibility that his governing party, Fidesz, could lose power, or, at minimum, its two-thirds “supermajority” in Parliament. Fidesz has used the supermajority to steer once-public assets to loyalists, and critics say the possibility of election losses next year is accelerating that trend.

Bernadett Szel, an opposition lawmaker, said that Mr. Orban and his allies were creating “an insurance policy for themselves” in case they lost power by transferring public money “to an ideologically constrained circle.”

“They are acting like they are doing a public good,” Ms. Szel said, “but they are actually stealing from the public.”

Mr. Orban has already moved against private media outlets in Hungary, cheering the 2018 consolidation of almost 500 under the ownership of a single foundation controlled by his allies. But in late April, Mr. Orban oversaw one of the most sweeping systemic changes yet, with all but five public universities placed under the control of privately managed “foundations in the public interest.”

The universities joined a growing ecosystem of 32 foundations and mostly conservative, government-affiliated think tanks which received about $3.5 billion in public money in the past year, according to K-Monitor, an independent nonprofit. These interlocking “public interest” foundations are actually in private hands and control public parks, a cinema, concert halls, a boarding high school and much more.

Mr. Orban, a champion of “illiberal democracy,” has spoken about his ambition to intertwine conservative politics with culture and academia. His government has banned gender studies, and he now personally controls the appointment of the top administrator to the Hungarian Academy of Sciences. (His government also forced the Central European University, founded by Hungarian-American billionaire philanthropist George Soros, to relocate to Austria.)

When the government moved to privatize the universities in April, the biggest beneficiary was the M.C.C. foundation, which received government-owned shares worth $1.3 billion, cash injections worth $462 million, and $9 million of property, including a luxury estate and a marina on Lake Balaton in western Hungary.

The incestuous nature of the foundation’s structure is evident in its advisory boards. Members are appointed for life, and only they can elect new members. Not a single woman sits on any of them.

The leader of M.C.C.’s main board is Balazs Orban (no relation to the prime minister), who has a dual role. As a state secretary in the prime minister’s office, he helped mastermind the property transfer to the foundation. And as its chairman, he oversees the recently privatized assets. Another board member is Zoltan Szalai, who also runs a glossy, pro-government weekly called Mandiner. A cafe he owns recently received a $2 million donation of once-public money for use as an event space. The cafe, Scruton, is named after the conservative English philosopher Roger Scruton.

M.C.C. is not a university in its own right, but a residential college. It provides special seminars and a dormitory to students, selected after a battery of I.Q. and “creativity” tests, who then receive stipends, networking opportunities and exclusive fellowships. Orban critics have labeled the foundation as an institution “designed to breed right-wing intellectuals.”

In an interview with The New York Times, Balazs Orban said that the M.C.C. project was critical for a small country like Hungary, with its history of occupation by foreign powers.

He was adamant that fomenting “patriotism” among the next generation of Hungary’s leaders was the priority.

“Ideology is not important. Patriotism is,” he said.

But recent articles and podcasts produced by M.C.C. have discussed reading lists or pushed intellectual lines supportive of the government’s antiglobalist message, discussing topics such as patriotism at a time of globalism, or whether political correctness is tolerance or oppression.

Mr. Orban’s government is not alone in targeting higher education. In Poland, a think tank with close ties to the right-wing government recently established Collegium Intermarium, a university that hopes to foster a conservative Christian elite.

Ivan Krastev, a Bulgarian political analyst, said that the changes in Hungary appeared mostly to be about money and power. But he noted that leaders in Hungary and Poland viewed universities as key battlegrounds in their quest to retain power.

“There is a very strong fear that universities are totally lost for the conservative side, that they are totally dominated by left liberals, and getting control of universities is becoming a big priority for these governments,” Mr. Krastev said.

Balazs Orban plans to use the M.C.C.’s wealth to expand programs for high school and elementary school students, aiming in the next three years to enroll 10,000 students in 35 European cities that have large Hungarian populations, mostly in neighboring countries.

M.C.C. was established in 1996 with private money from a Fidesz backer, with the goal of training a post-Communist elite. It was known as more conservative than other residential colleges but was respected for providing high-caliber independent programs. While many lecturers’ views hew closely to the Fidesz line, some are independent or apolitical.

In interviews, some students wondered if the influx of cash and government attention would force a more partisan line of study. Others praised the institution for its quality and low student-to-faculty ratio, and for providing extraordinary access to scholars and policymakers.

“It’s a huge opportunity,” said Viktor Lazar, a third-year student in business and economics at M.C.C.

“In most cases at university, we are just given lectures,”

He continued, “Here in M.C.C., it is always so easy to ask a question because we are in small groups,” he added.

While there are some conservative students at M.C.C., many do not necessarily support the Orban government. Some worried privately that after M.C.C. received so much media attention, their education might come with a stigma attached.

Even if the opposition comes to power next year, it is unclear whether they could dismantle the educational foundations or restore universities to their previous status. A future parliament could not change the rules regulating public interest foundations without a two-thirds majority.

Elections lose their meaning if a “deep state, with competencies, assets and revenues given to Fidesz,” remains in control no matter who wins, said Balint Magyar, a sociologist and former two-term education minister who researches post-Communist governments.

Mr. Hiller, the former Socialist education minister, said that the debate over the higher education system would deepen polarization in Hungary, no matter who triumphs in the April vote.

“The whole system is built on this ideological shift,” he said. “The effects will last for decades.”