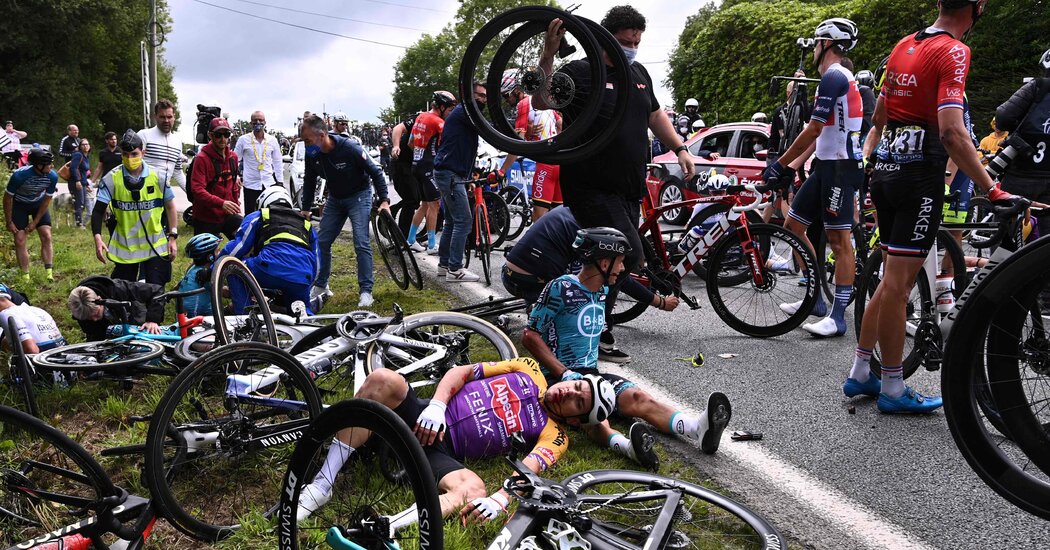 The French authorities said they were looking for an unidentified woman who held a banner along the side of the road at the Tour de France on Saturday, leading to a collision that sent dozens of cyclists tumbling to the ground.

Footage from the scene shows fallen athletes in a heap of tangled legs and spinning wheels after a German rider, Tony Martin, crashed into the sign along the side of the road before falling. That set off a cascade of collisions in the middle of the peloton, a French word meaning “ball” or “group” that also refers to a cluster of cyclists in a race.

In a Facebook post on Saturday, the authorities in the French department of Finistère, in Brittany, asked for witnesses to help them identify the woman who held the banner, which said: “ALLEZ OPI-OMI!” — the French word for “go” along with two German terms of endearment for grandparents. Before the crash, she appeared to be facing away from the racers and toward the television cameras.

The accident happened during the first of the race’s 21 stages, in the municipality of Saint-Cadou, according to the authorities. The police said that the woman, who was wearing glasses and a yellow jacket, left the scene before investigators arrived.

Pierre-Yves Thouault, the deputy director of cycling with the Amaury Sport Organisation, which runs the Tour de France, told Agence France-Presse this past weekend that the organization planned to sue the woman. “We are doing this so that the tiny minority of people who do this don’t spoil the show for everyone,” he said.

On Monday, the Amaury Sport Organisation confirmed that it had made a complaint about the woman to the French authorities but did not immediately respond to a question about the potential lawsuit.

The collision was one of two major crashes on the first day of the race, causing injuries that led to the withdrawals of four cyclists: Jasha Sütterlin of Germany, Marc Soler of Spain, Cyril Lemoine of France and Ignatas Konovalovas of Lithuania.

It is not uncommon for Tour de France fans to crowd the roads and inadvertently (or even intentionally) trip up the competitors, and the rise of spectator selfies over the past decade has compounded that risk.

But the racers have always contended with unexpected obstacles.

In 2011, a car belonging to a news crew clipped a group of riders and sent one of them, Johnny Hoogerland of the Netherlands, barreling into a barbed-wire fence. In 2018, several cyclists rode into a cloud of police tear gas that had been intended for protesters, stopping the race for about 15 minutes as the riders were treated with eyedrops.

And in a remarkable sequence of events in 2016, a swarm of spectators caused a television motorbike to stop in the cyclists’ path during Stage 12. Amid the confusion, a police vehicle crushed the bicycle of a leading competitor, Chris Froome, who then began running toward the finish line while he waited for a replacement bike to catch up with him.

After the pileup on Saturday, Martin was able to stay in the race. His team, Jumbo-Visma, said on Twitter on Sunday that “all of our riders seem to be okay after the massive and despicable crash.”

On Instagram, Martin thanked his fans for their support and added a message for “all the people next to the road who think that the #tourdefrance is a circus.”

“Please respect the riders and the #tourdefrance!” he wrote. “Use your head or stay home!”

Man shot by LAPD in Pacoima after car pursuit, crash