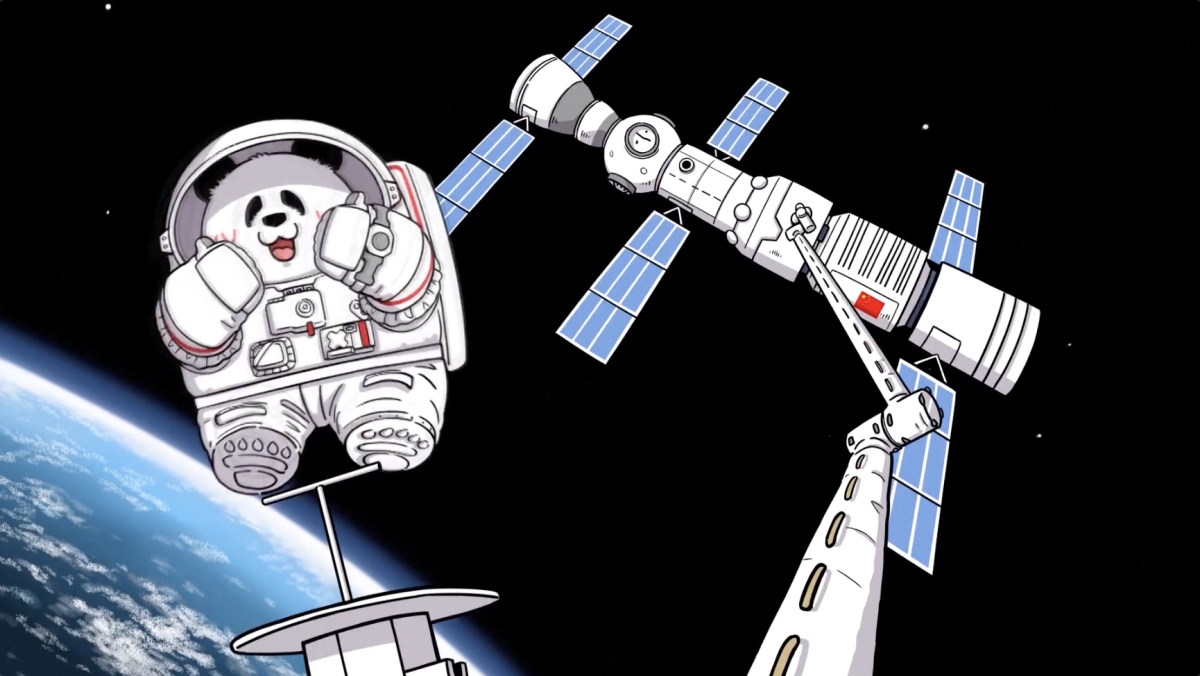 A new Chinese animated cartoon shows a sample of what the country’s astronauts will experience in space on the new Tiangong space station.

The Shenzhou 12 mission with three Chinese astronauts — Nie Haisheng, Liu Boming and Tang Hongbo, all men — docked with the core module, called Tianhe, on June 17. They will live there for the next three months, according to state media.

The cartoon from China Media Group shows the crew members personified as pandas floating in space, accompanied by a song with new lyrics adapted to the lullaby “Twinkle, Twinkle Little Star.”

If you want to sing along, here is part of the official translation into English:

“Working in space is not easy,
Don’t forget to be healthy,
Enjoy hundreds of dishes,
Yu Xiang Rou Si, Kung Pao Chi,
Rice’n cookies so tasty,
Happy pandas you and me.”

The song also pays tribute to robotic arms and wifi on the space station, to keep crew members connected with Earth and able to do scientific and maintenance tasks in orbit.

Shenzhou 12, China’s first crewed mission since 2016, will include “a range of tasks such as repair and maintenance,” Yang Liwei, director of the China Manned Space Engineering Office, said in an English-language report from state media provider CGTN earlier this month.

China plans to finish construction on its space station by 2022 and will send periodic supply ships there for crew supplies and equipment. The station is expected to last 10 years, according to SpaceNews, with future launches expected to include such items as international science payloads, Chinese experiment modules and foreign astronauts.

Russia stated earlier this month that it may put cosmonauts aboard the Tiangong space station in the near future, although negotiations with the Chinese are at an early stage. Russia is a partner in the International Space Station program, but China is not an ISS participant largely due to a 2011 prohibition on NASA bilateral agreements arising from concerns about China’s security and military practices.

Roscosmos Director General Dmitry Rogozin also said this month that his country may pull out of the ISS agreement in 2024, which would presumably make a Chinese agreement somewhat easier. In the meantime, new NASA administrator Bill Nelson and new deputy NASA administrator Pam Melroy have both expressed concerns about more ambitious and aggressive Chinese activities in space in recent Congressional hearings (although Melroy was a nominee for deputy administrator at the time.)

China’s recent space activities of note include landing the first-ever rover on the far side of the moon in 2019, and earlier this year, placing the first Chinese rover on Mars. China also met international condemnation for allowing the core stage of a huge Long March 5B rocket to plunge uncontrolled to Earth after launching the core stage of Tiangong in May. The rocket fall resulted in no casualties.

This 'charming' particle could have saved the universe

The Secret Workings of Smell Receptors, Revealed At Last