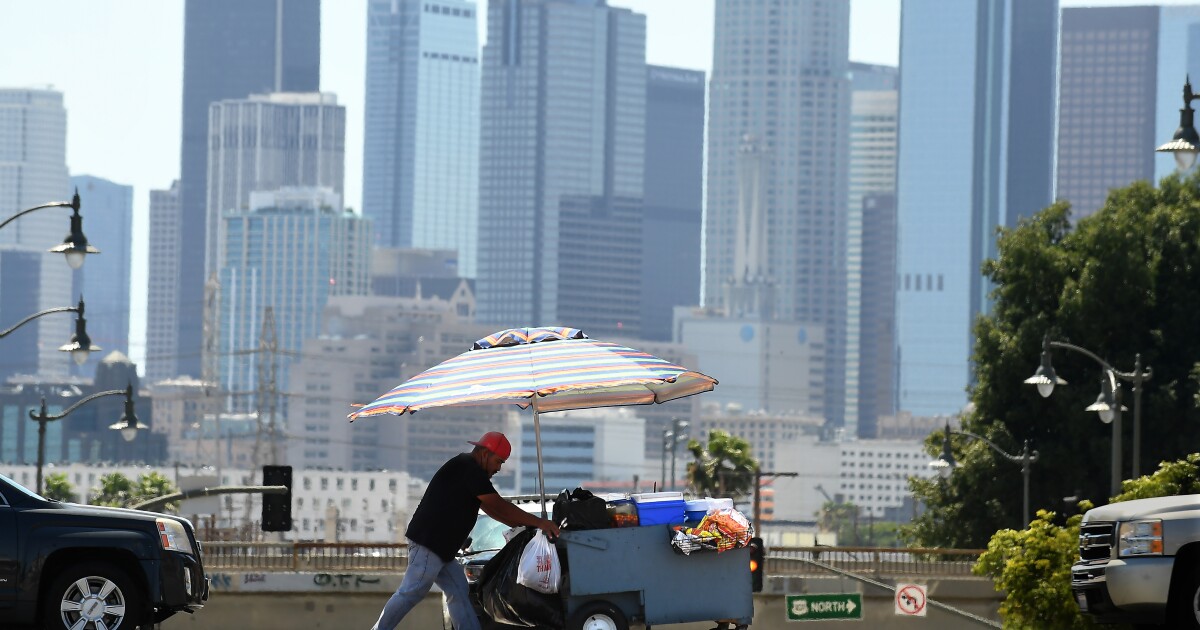 Temperatures in the inland valleys, mountains and deserts will range from 100 to 110 degrees through Sunday and Monday, said Rich Thompson, a meteorologist with the National Weather Service. The mercury is likely to hit 111 in the Antelope Valley on Monday, he said. Woodland Hills and the western San Fernando Valley will likely hover between 95 and 102 degrees Monday.

The scorching heat, relatively low humidity and windy conditions in some areas also increase the chances for wildfires across the region.

A National Weather Service-issued excessive heat warning will be in effect through Monday evening for mountain areas in Ventura and Los Angeles counties, including Antelope and Santa Clarita valleys. For those who need relief from the heat, Los Angeles County will be operating a number of cooling centers in inland areas early in the week.

Coastal Los Angeles County will fare slightly better, with highs from the lower to mid-70s at the beaches Monday. Thompson said temperatures Monday will be in the mid- to upper 80s downtown and the lower to mid-90s in Beverly Hills.

Elevated fire weather conditions will continue through at least Friday, with very dry conditions early in the week followed by the potential for fire-sparking lightning during storm activity.

“It’s kind of complicated in terms of fire weather,” Thompson said, explaining that any storms Tuesday would “likely be more on the dry side,” making them more of a fire threat because of the potential for dry lightning strikes. Moisture in the atmosphere will increase Wednesday and Thursday, so if storms do develop those days, they’ll likely carry more of a flash flood threat than a fire threat. But Thompson said a lightning strike could still occur outside of a thunderstorm Wednesday or Thursday, making fire weather a concern through the week. An enormous volume of dry lightning strikes was responsible for sparking multiple major fires during the devastating 2020 fire season.

The worst of the heat will be over by Tuesday, but slightly increased temperatures combined with increased humidity later in the week mean “it still will feel pretty uncomfortable,” according to Thompson.