The cow that fled a slaughterhouse earns her freedom, capping a moo-ving saga 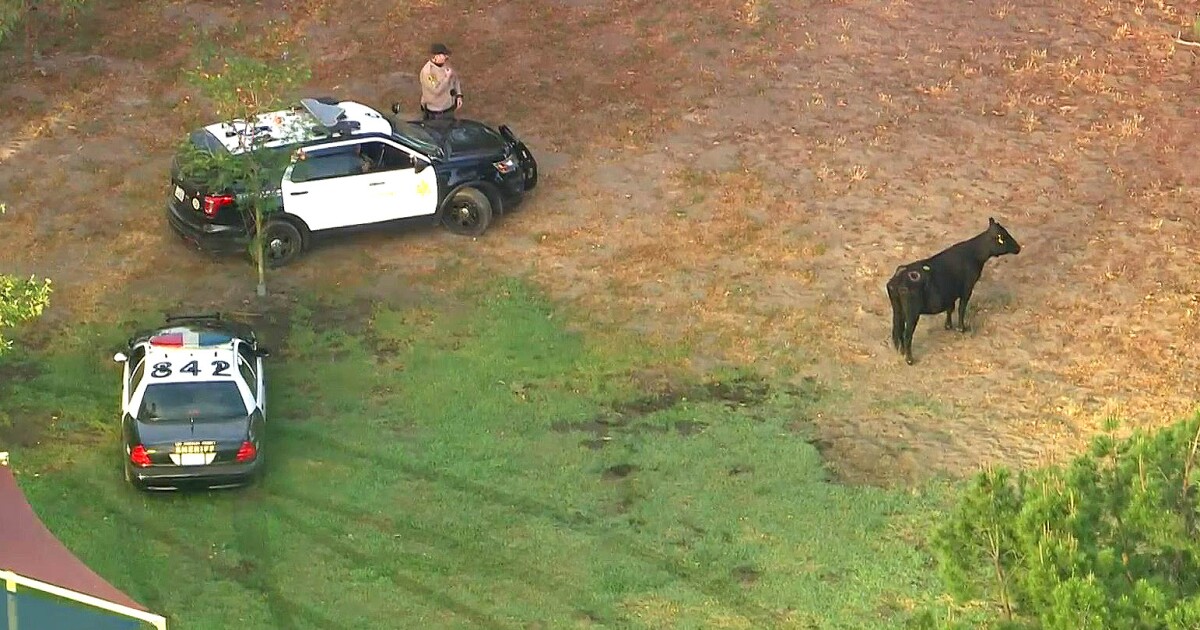 The last of the now-infamous cows who fled the slaughterhouse has earned herself a lifetime of freedom.

The moo-ving saga ended Thursday after sheriff’s deputies tracked down the cow grazing in a South El Monte park.

Instead of being sent back to the Pico Rivera slaughterhouse with the others, this one was spared. Her new home will be at the 26-acre Acton pasture of the animal advocacy group Farm Sanctuary, whose officials celebrated her break for freedom.

“When there are these animals that run for their lives — literally — it’s heartbreaking when they’re not able to be given freedom and a sanctuary,” Farm Sanctuary president and co-founder Gene Baur said Thursday. “We’re very happy that at least one will be able to live out her life.”

The cow looked lost when spotted around 6:00 a.m. in Whittier Narrows, but otherwise seemed healthy. Aerial footage captured by KTLA showed the in a patch of grass near a picnic area.

She was wrangled and placed into a trailer, nearly 36 hours after breaking out of the Manning Beef slaughterhouse with 39 other cows.

The cows escaped at around 7:30 p.m. Tuesday, through a fence that was accidentally left open, according to official reports.

The animals quickly gained national attention as they stampeded through suburban streets before settling into a sleepy cul-de-sac on Friendship Avenue.

Ranchers arrived with lassos to help sheriff’s officials round them up. Deputies shot and killed one cow after it charged at a family of four, officials said.

Experts noted that cows are known to be empathic, intelligent and social creatures, and that the escapees were likely terrified and confused.

But the last cow evaded capture for yet another night, with scores of people rooting for her success.

“Free all the cows in Pico Rivera, it’s the least they deserve!” one person wrote on Twitter.

The cow’s tale caught the attention of singer Diane Warren and activist Simone Reyes, who worked with Farm Sanctuary and Manning Beef to help arrange for her rescue, sanctuary officials said.

“Seeing these cows escaping their horrible fate broke my heart,” Warren said in a statement. “They knew what awaited them. These are smart, empathetic, beautiful souls.”

Baur and other animal rights advocates said they hoped the cow’s story would move people to think about how animals are treated in many factory farms and slaughterhouses.

“Who wouldn’t escape from a slaughterhouse if given a chance?,” said Farm Sanctuary board chair Emily Deschanel.

Those who have been following the saga can visit the cows at the sanctuary when it reopens July 10, officials said.

And although her rescuers were not yet certain of the cow’s age, they said she is likely young.

Baur said she will be given a name when she arrives in Acton, as is the group’s custom. He and many others were inspired by her resilience.

With Delta variant on the rise in L.A. County, vaccinations urged