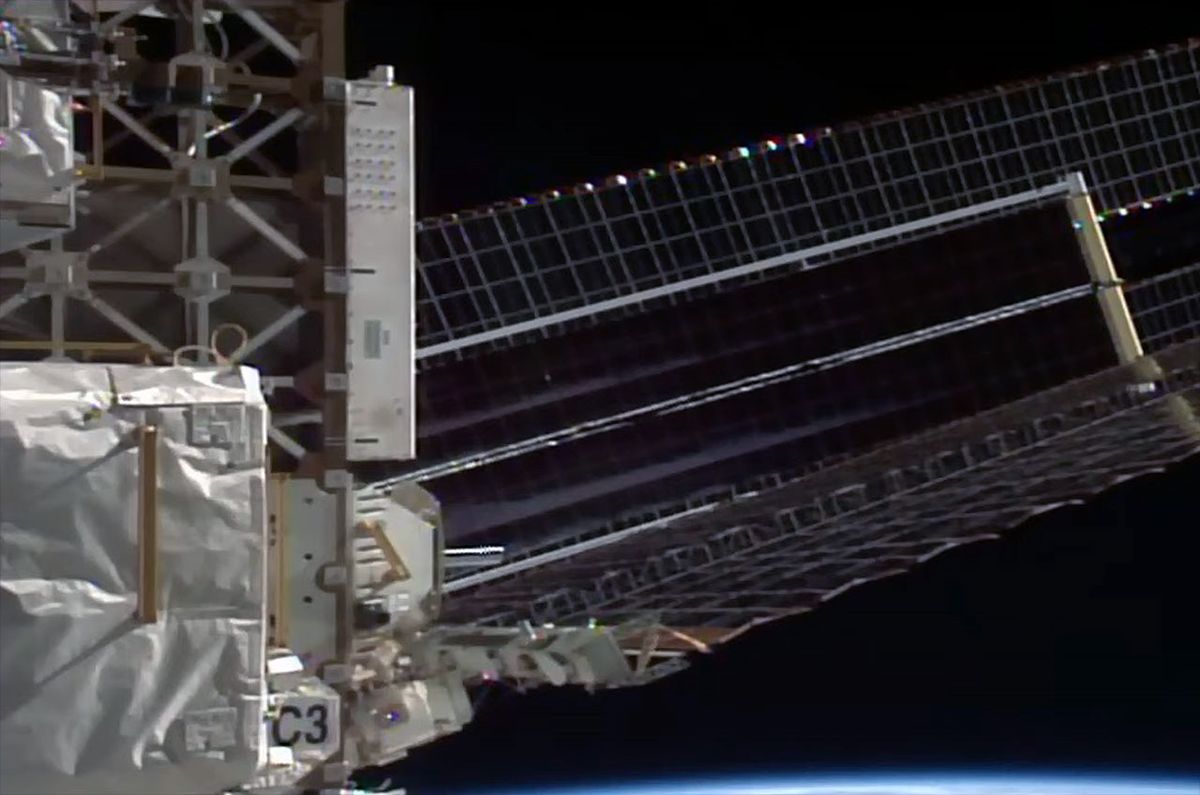 For the third time in less than two weeks, two astronauts ventured outside of the International Space Station to augment the orbiting outpost’s power system with new solar arrays.

NASA astronaut Shane Kimbrough and French astronaut Thomas Pesquet with the European Space Agency (ESA) completed a six-hour and 45-minute spacewalk on Friday (June 25), during which they install the second of six new International Space Station (ISS) Roll-Out Solar Arrays (iROSA). The pair previously worked together during spacewalks on June 16 and June 20 to deploy the first new array.

Friday’s extravehicular activity (EVA) positioned the second iROSA opposite the first on the far left (port) side of the space station’s backbone truss. Now both the 2B and 4B power channels on the port 6 (P6) truss have the new arrays deployed.

The new, more capable but smaller arrays are being installed in front of the station’s existing arrays such that they partially overlay the older, larger fixtures. The legacy arrays are beginning to show signs of degraded power production as they have operated beyond their 15-year design life. The P6 arrays — the first pair deployed in December 2000 — have been generating electricity for the station for more than 20 years.

When used in tandem, the legacy and new arrays will be capable of increasing the station’s power supply by 20% to 30%.

Kimbrough and Pesquet began Friday’s spacewalk at 7:52 a.m. EDT (1152 GMT) and after configuring their worksites, set about repeating some of the same steps they did on the earlier two spacewalks. Pesquet again positioned himself at the end of the station’s Canadarm2 robotic arm to transfer the still-folded 750-lb. (340 kilograms) iROSA from its temporary stowage pallet to the P6 truss, where Kimbrough was waiting to accept it.

Once moved into place, Kimbrough and Pesquet worked to affix the iROSA to its mount on the canister at the base of the P6/4B array. The post is designed to tilt the iROSA forward from the legacy array by 10 degrees.

The spacewalkers unfolded the iROSA from its launch configuration to its full 20-foot (6 meters) length. They then worked on driving bolts to secure the array in place and, after waiting for the station to enter a nighttime pass, ran cables to tie the array into the 4B power channel.

Then, with the release of two bolts, Pesquet freed the iROSA to unfurl. The potential energy stored by the array’s rolled-up carbon composite booms was enough to unroll the iROSA to its full 63-foot (19 m) length. The entire process took about 10 minutes.

“From our view, deployment is looking excellent,” Jenni Sidey, a Canadian Space Agency astronaut serving as the ground intravehicular officer in Mission Control in Houston, radioed Pesquet and Kimbrough. “We’re getting good power from the solar array, so we have a lot of happy faces down here. Well done both of you.”

The two new arrays, now deployed, were launched in the unpressurized “trunk” of the SpaceX Dragon cargo spacecraft that arrived at the space station June 5. Two additional pairs of arrays will be similarly delivered on resupply missions later this year.

In addition to augmenting the space station’s power supply, the iROSAs are also serving as a test for NASA’s Artemis Gateway to be deployed in orbit around the moon. The arrays for the Gateway will be wider and deployed remotely, but otherwise will use the same technology as developed by Deployable Space Systems (DSS) and Boeing.

This was the 241st spacewalk in support of space station assembly. The EVA, which ended at 3:37 p.m. EDT (1937 GMT), was the ninth for Kimbrough and the fifth for Pesquet. Kimbrough has now spent 59 hours and 28 minutes on spacewalks, tying him with Russian cosmonaut Fyodor Yurchikhin for sixth in the world for time spent on EVA. Pesquet has logged 33 hours even.