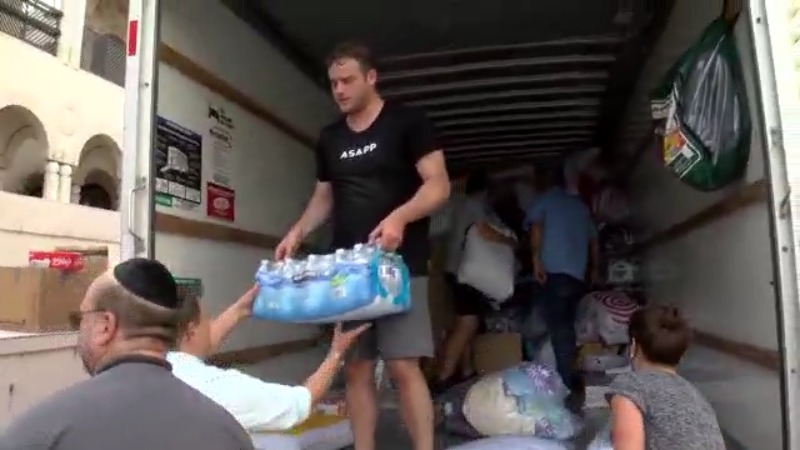 SURFSIDE, Fla. (WFLA) — At least five truckloads of donations were dropped off at the Shul of Bal Harbour early Thursday evening.

Several of the nearly 100 people who are missing after the catastrophic collapse at the Champlain Towers are members of the Jewish congregation, the synagogue’s president Joe Givner told 8 On Your Side.

“I just went inside….We have an army of volunteers who are bringing supplies, water, furniture, clothing, you name it,” he said.


South Florida condo collapse: How will experts figure out what caused building to fall?

A woman volunteering for Cadena, one of the organizations that was unloading the donations, said she has seen buildings ruined by earthquakes in her home of Mexico City.

“But watching something like this happening during the night with no warning, it is really a shock,” Dana Nicolaievsky said. “I saw the families waiting for the names, for the victims, making DNA tests from relatives. It was a very sad scene.”

8 On Your Side spoke with Soraya Cohen at the reunification area a few blocks from the rubble.

“This is the difference between life and death anything is possible,” Cohen said. “It’s possible the building will collapse and its possible you wont and you’re gonna save 20 people. Anything’s possible.”

Cohen said her husband Dr. Brad Cohen, a Miami orthopedic surgeon, and his brother visiting from Alabama were asleep in an 11th floor condo when the building suddenly crumbled to the ground.

“When Brad went to sleep last night did he think the roof was going to collapse on him?” she said.

“We pray together and he’s just the sort or person you want to have around in your community,” Givner said.

Rains made the process of searching for survivors even more challenging Thursday night.

One first responder said the pile or rubble reminded him of 9/11.

“I see many people on their balconies,” he was heard saying over radio communication. “The building is gone. There’s no elevators. There’s just nothing. I mean it almost resembles the Trade Center.”

Throughout the day and into the evening, community members came to pray at the Shul for the victims and their families as they try to make sense of the unimaginable tragedy.

A fundraiser set up by the Shul raised more than $400,000 dollars for disaster relief by early Friday morning.