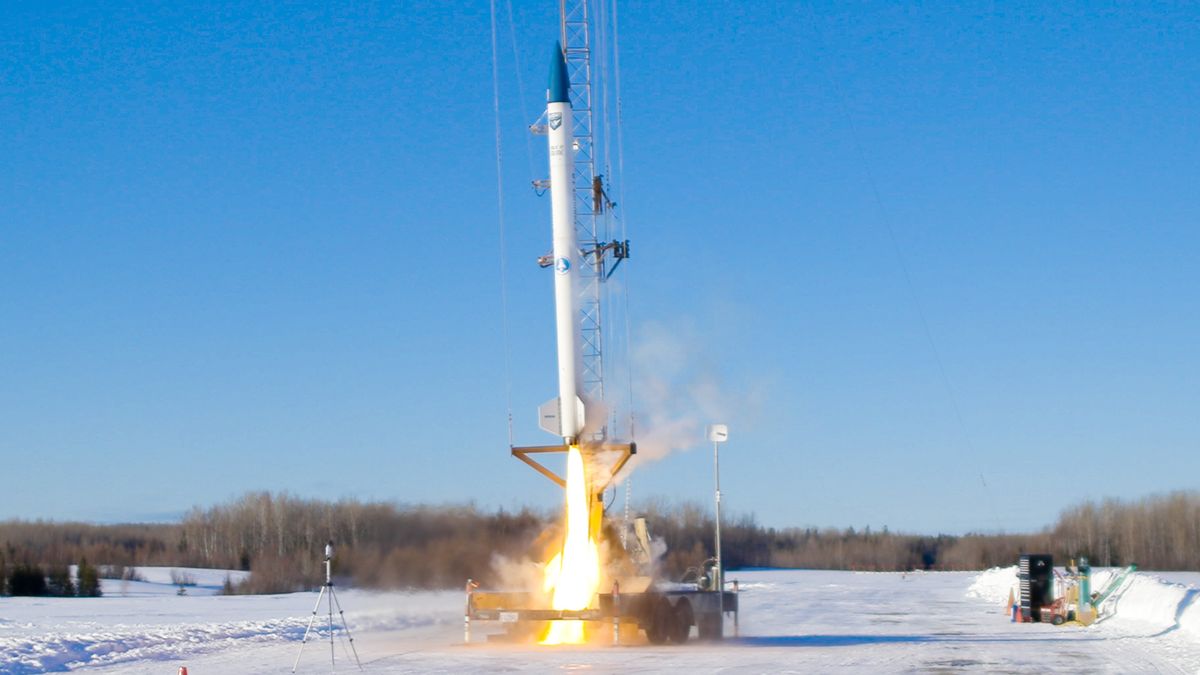 bluShift Aerospace just hit a major milestone with its first signed purchase order, which means the small company is starting to bring in customer revenues.

The Maine-based startup announced that a Virginia educational company called MaxIQ Space has agreed to purchase as many as 60 student payloads per launch, on a minimum of two suborbital launches per year — although the agreement also includes test launches and eventual orbital missions. Financial details were not disclosed.

The company aims to launch nanosatellites into polar orbits from the coast of Maine. bluShift eventually plans to target customers who want more flexible orbits than what is available to secondary payloads riding aboard larger SpaceX Falcon 9 or Rocket Lab Electron rockets.

bluShift has begun buying the materials to manufacture its biofuel engine as it finalizes the design, CEO Sascha Deri said in a press conference Thursday (June 24). “I can’t get into details about it, obviously, but I’ve really been impressed with it,” he said during the discussion, which was hosted on Zoom.

The company is also seeking approvals from the U.S. Federal Aviation Administration for another launch site — which will ideally allow rockets to fly over the ocean for more launch range flexibility — and a larger rocket to continue its testing program, Deri added. bluShift has said it’s aiming for a location in eastern Maine to launch a newer rocket in development called Starless Rogue, which will be capable of lofting suborbital payloads to 150 miles (241 kilometers) in altitude.

MaxIQ is best known for performing a student-led data collection project aboard the International Space Station (ISS), bluShift said during the press conference. MaxIQ says it performed the ISS project in 2020 with NASA and another educational company that manages student ISS payloads, called Quest for Space. It appears that the joint ISS project launched on Northrop Grumman’s 13th cargo resupply mission in February 2020, as Quest for Space was listed in the manifest for the Cygnus spacecraft.

Despite sending 1,000 student payloads to space across 80 launches, however, MaxIQ said it had not been able to find a consistent launch partner, which is why it signed on to the bluShift deal. (MaxIQ and bluShift also co-launched a science payload for Maine’s Falmouth High School on Stardust 1.0, so the companies have worked together before.)

“What we’ve been looking for is launch opportunities, and bluShift is exactly positioned for us in terms of the flexibility and the pricing points; it’s affordable for educators and schools,” MaxIQ president Judi Sandrock said during Thursday’s press conference.

“We’re finding that a lot of youngsters are very interested in sustainable development goals, so they really want to see [us] working with a project where there is consciousness of [environmental] sustainability from end to end,” Sandrock added of the decision to work with bluShift. “I think that’s going to be very interesting for them from a data-collection perspective, as well as a wonderful education opportunity.”

Alongside looking to recruit customers, bluShift is trying to crowdfund approximately $1 million for general revenues; it has raised about half of that goal, or $565,000, on WeFunder to date. On the crowdfunding webpage, the company says it has already raised almost $1 million in private rounds and that it hopes to be cash-flow positive in four years.

Once the WeFunder campaign concludes, “we probably will go into either pre-seed or Series A round of funding,” Dari said during the press conference, noting that federal funding has so far been unavailable to bluShift. Another possible revenue stream could come with a “symbiotic relationship” with a spaceport that could be used for launch infrastructure or other needs, he added.

Did a comet strike 13,000 years ago change human civilization as we know it?

Police who kill often receive lenient or no punishments. Derek Chauvin could be the exception.