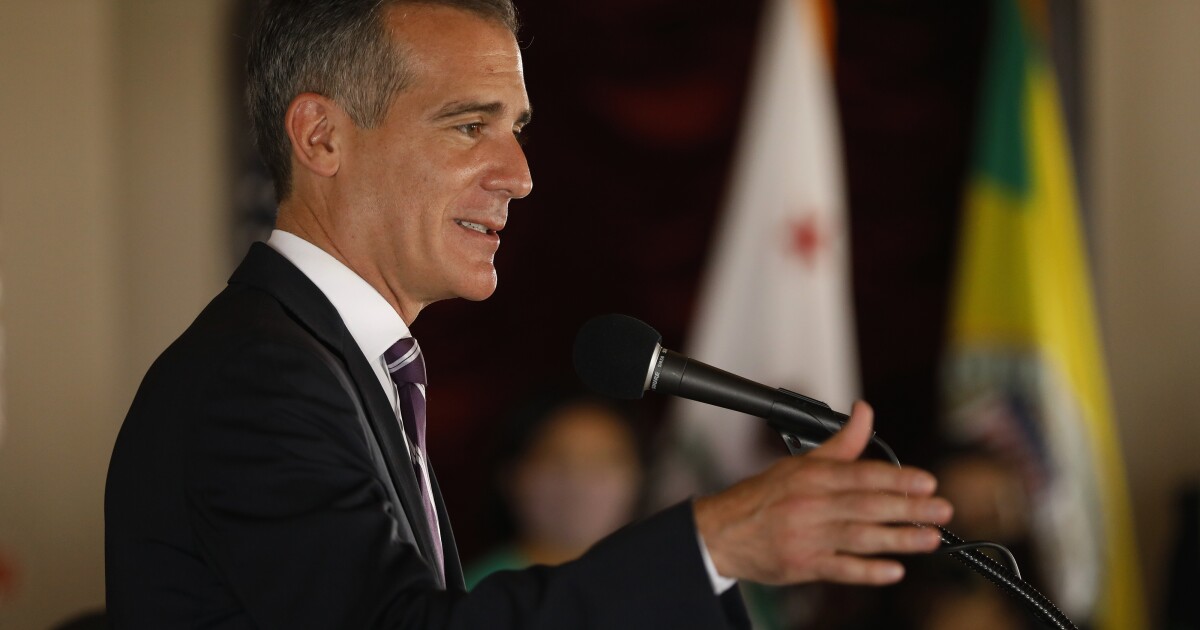 In politics, behind-the-scenes gossip and smack talk are as commonplace as groundbreakings and ribbon-cuttings.

Still, the revelations that Mayor Eric Garcetti’s chief of staff disparaged elected officials, city employees and heroes of organized labor on a private Facebook group have stunned even the most jaded political veterans.

The scandal created another major distraction for Garcetti, now finishing his eighth year in office. His longtime advisor, chief of staff Ana Guerrero, has been placed on an indefinite leave as a result of her Facebook posts, adding to the instability felt at the upper levels of City Hall.

The mayor is already viewed as someone with one foot out the door, awaiting a presumed invitation to join the Biden administration. Another aide is facing sexual harassment allegations. Now, the scandal over the private Facebook group has pulled back the curtain on what some see as a catty, two-faced culture in his office.

“The lack of class and the stupidity of it all is overwhelming,” said Richard Katz, who served as a Garcetti appointee on the planning commission, when asked about the Facebook posts.

Katz said responsibility falls on the people who wrote the posts. But it also reflects on the mayor, since several of them were his employees or appointees, he said.

The Times reported this week that Guerrero, a longtime Garcetti loyalist, disparaged labor icon Dolores Huerta and others in 2016 and 2017 on the private Facebook group “Solid Gold.” Other Garcetti aides and appointees belonged to that group.

Guerrero apologized this week, saying her comments were “offensive and wrong.”

Garcetti, in an interview Thursday, called Solid Gold a “defunct private Facebook group” whose contents do not define the culture of his office. The mayor said his decision to put Guerrero on leave “communicated the gravity of the situation” to the city and his co-workers.

“I set the tone, and everyone who works with or around me knows that my expectation is that we lead with respect, we lead with love,” Garcetti said.

The posts from staffers have contrasted sharply with the public persona of a mayor who has called for city government to be respectful and inclusive.

Guerrero, in some of her Facebook messages, offered a darker perspective, saying “I hate her” in a post about Huerta, the 91-year-old co-founder of United Farm Workers. She also mocked the appearance of a City Council staffer, who had posted a shirtless photo of himself on his Facebook page.

In April 2017, Guerrero used a Spanish word — one that translates to “gross” — in response to a campaign message from Maria Elena Durazo, the veteran labor leader who was then running for office. Durazo, now in the state Senate, had backed Garcetti’s opponent, City Controller Wendy Greuel, in the 2013 mayor’s race.

Less than a year after Guerrero’s comment on Durazo, Garcetti stood with Durazo in front of news cameras in Chinatown, hugging her and endorsing her campaign.

While some have expressed amazement at the sting in some of Guerrero’s messages, others have marveled at the fact that they were written down on a social media platform — even one that was private.

Political consultant Eric Hacopian said it’s not unusual for political operatives to make cutting comments in private about others in politics.

Such remarks would not have been uncommon inside bars or the backs of campaign offices, he said.

“What’s astonishing is that so many political professionals would put this in a forum that people can see and make copies of,” said Hacopian, who has represented candidates in L.A. mayoral and council campaigns.

Around City Hall, some have wondered whether they too were mentioned in the Facebook group and speculated on whether the fallout would hurt Garcetti’s chances to be appointed U.S. ambassador to India.

The Times reported last month that Garcetti is likely to be nominated by President Biden, according to a person familiar with the vetting process. The White House has rolled out nominations in recent weeks, but so far the mayor’s name has not appeared.

Garcetti, in Thursday’s interview, said he had been told that the Solid Gold Facebook site has “been closed down for years.”

The mayor said his office has had thousands of positive interactions with the public and argued that he had moved promptly to address the Facebook controversy.

On Wednesday, Garcetti selected Rich Llewellyn, who has worked for him on and off since 2001, as acting chief of staff for the near future. Llewellyn starts on July 3, Garcetti said in an email to city workers.

“This has been a tough week, but it pales in comparison to the challenges that everyday Angelenos face in their lives,” he wrote.

In his interview, Garcetti said he did not know whether Cecilia Cabello, another participant in the Solid Gold group, would remain as one of his representatives on the city’s redistricting commission.

The controversy spurred Stephen Saltzman, who served as a deputy mayor under Tom Bradley from 1978 to 1981, to send a letter Thursday demanding the outright firing of Guerrero.

Katz, the former Garcetti planning commissioner, said that if the mayor wanted his appointees to lead with love, “the message apparently didn’t trickle down.”

One former staffer who worked in the mayor’s office, who asked to remain anonymous to speak candidly, said the Facebook revelations did not come as a surprise. “It was a culture where you were inside or you were out,” the ex-staffer said.

Still, some have argued in recent days that Garcetti should not be held responsible for the private musings of aides on a Facebook page that didn’t include him. Others have defended Guerrero, calling her a kind and capable leader of the mayor’s operation who wrote messages never intended for public viewing.

“I have only known her to be a lovely person who had the best interests of those who are struggling the most,” said Robert Vinson, a Garcetti appointee who serves on the city’s Cultural Affairs Commission. “I don’t see a point in going over what was printed and what the reaction was.”

“I choose to cherish the Ana I know,” he added.

Public relations consultant Helen Sanchez said she feels badly for Garcetti’s staff, particularly Guerrero, whom she praised as genuine and “a very, very nice person.” But she also argued that there are lessons to be learned from the fallout over the private Facebook posts.

Some of the group’s disparaging remarks were made about people who had been political adversaries of Garcetti during his 2013 run for mayor, said Sanchez, who worked on Garcetti’s campaign that year.

One clear lesson, Sanchez said, is that once an election is over, people need to reach out to their rivals and work together.

“The second lesson is, social media is the devil,” she said. “You have to expect whatever you put on it will see the light of day. And the third is: be nice. Just be nice to people.”

How to Break Into the Hex From 'WandaVision'—With Physics!