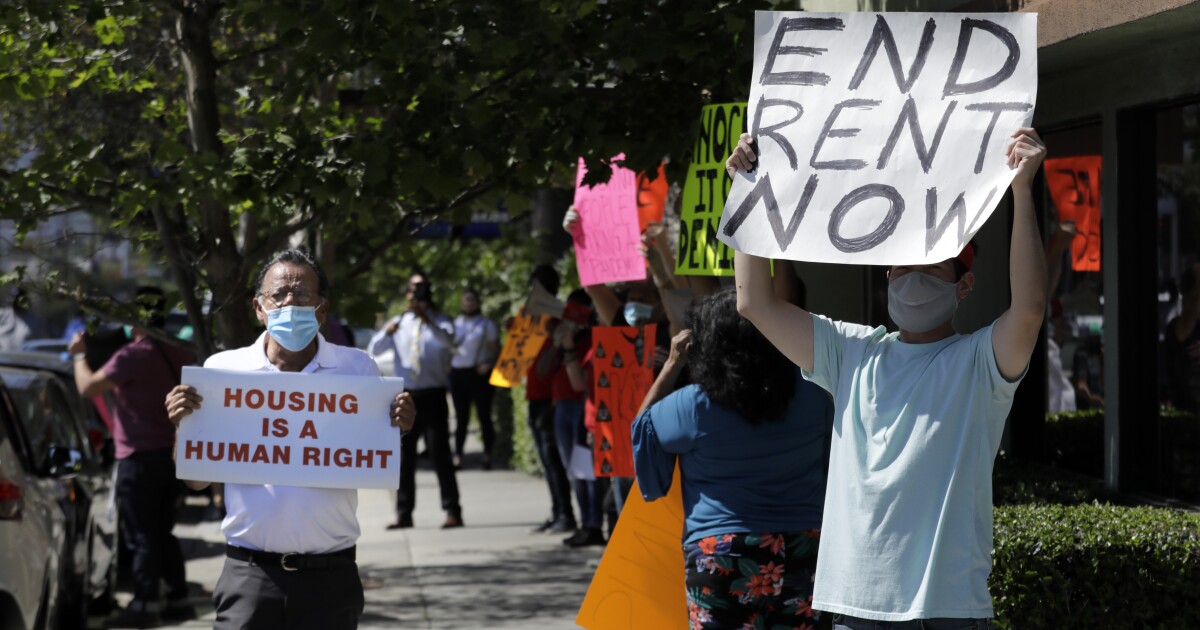 With California’s tenant protections against evictions expiring next week, Gov. Gavin Newsom and legislative leaders agreed Friday to extend them until Sept. 30 and to cover 100% of the back rent owed by many low-income residents whose finances were hurt by the COVID-19 pandemic.

The state protections for tenants who pay at least 25% of their rent expire on Wednesday, but the agreement between Newsom and the leaders of the state Senate and Assembly makes it likely the Legislature will give the required approval of the three-month extension as early as Monday.

Providing more time will also allow distribution of hundreds of millions of dollars in rental assistance cash that has gone unclaimed since it was offered in March.

“Our housing situation in California was a crisis before COVID, and the pandemic has only made it worse — this extension is key to making sure that more people don’t lose the safety net helping them keep their home,” Atkins said in a statement.

The governor said that without the extension, many low-income people face eviction even though the economy is recovering.

The proposal, Newsom said, is “protecting low-income tenants with a longer eviction moratorium and paying down their back-rent and utility bills — all thanks to the nation’s largest and most comprehensive rental assistance package which I am eager to sign into law as soon as I receive it.”

Tenant advocates say it is essential that the Legislature approve the extension before Wednesday’s expiration of the current eviction protections, and expand the rent relief program to give renters who are deep in debt a clean slate.

“That would provide a real sense of relief for a lot of folks who have been struggling to pay the rent and who are facing the reality that in about a week they, absent actions by the Legislature, would be facing eviction when the July rent comes due,” said Brian Augusta, legislative advocate for the California Rural Legal Assistance Foundation, which represents low-income tenants.

In January, the governor and Legislature approved $2.6 million in rental assistance for low-income tenants as well as a law that blocks eviction of tenants through June 30 as long as they pay at least 25% of their rent. The state and local governments have divided up the money between them.

But the state has only sent out $61.6 million of the $1.4-billion share that it is distributing — less than 5% — to 5,442 applicants, and landlords and tenants have so far only applied for about half the money as of Thursday.

Some counties are also having a hard time getting out the $1.2 billion in relief that the state provided to local agencies for distribution.

About 758,000 California households are behind on rent, with the amount owed averaging $4,700, according to research by PolicyLink and the USC Equity Research Institute.

In addition, the Biden administration this week extended a national moratorium on evictions until July 31.

Many tenants across the state have been anxious as negotiations continued behind closed doors in Sacramento about extending the state protections against evictions and expanding rental assistance to provide tenants with a clean slate on past rent.

Not knowing in recent weeks whether there would be relief has caused significant anxiety for tenants including Lori Kolstad, who owes about $13,000 in back rent for the Vacaville home in which she and her family reside.

“It’s just a really scary thought right now of really being out on the street,” said Kolstad, who worked in clothing production before the business shut down last year because of the COVID-19 pandemic.

Kolstad said Wednesday that she has been paying about half of her rent when she could, but worries she could face eviction unless the Legislature approves a relief program.

“It would be a huge help,” Kolstad said. “It would take tons of pressure off.”

Under the current state law, if landlords waive 20% of back rent owed, the state would reimburse them for 80% of an eligible tenant’s unpaid rent going back to April 1, 2020. Renters whose landlords choose not to participate in the program may apply on their own and receive 25% of unpaid rent.

However, landlords and tenants have not applied in sufficient numbers under the old funding, with tenant advocates saying the paperwork is complicated and some landlords are not cooperating, which discourages many tenants who only would get 25% of back rent paid if the landlord does not participate.

The proposal released by legislative leaders and the governor would increase the money available for rental assistance to $5.2 billion, which would pay 100% of back rent owed by many low-income tenants as well as rent for some future months as money lasts.

State officials think more landlords and tenants will apply for the rental assistance if it covers all of the rent owed as well as rent for future months as money is available.

Meanwhile, landlords are concerned that this would be the fourth extension, with many of them having gone without receiving full rent for more than a year.

Newsom originally signed an executive order barring evictions in March 2020 at the beginning of the COVID-19 pandemic when a state stay-at-home order meant many people could not go to work to earn money for their rent. The Legislature and governor extended the eviction protections in August 2020.

Landlord groups have indicated a short extension may be workable to get the rental assistance money distributed.

“A long extension is not necessary,” said Debra Carlton, executive vice president of the California Apartment Assn. “We don’t anticipate a rise in evictions, so long as tenants are working with their rental housing providers to apply for funds. Rental owners are better off getting the back rent and avoiding a vacancy.”

Carlton said some landlords have been hampered by tenants who refuse to communicate or cooperate with property owners when it comes to the application process.

“We cannot extend the eviction moratorium for tenants who are cheating the system,” she said.

Augusta said the low-income tenants his group represents would welcome the chance to have all of their back rent paid, and he worries that rental assistance money will go undistributed if evictions are allowed to resume too soon.

“It would be a travesty to let evictions turn back on with that money sitting in the bank,” Augusta said. “It would be enormous to get some extension and some breathing room while we try to improve how we get the money out.”