He Abused Her for Years. She Killed Him. A French Court Weighs if It Was Murder. 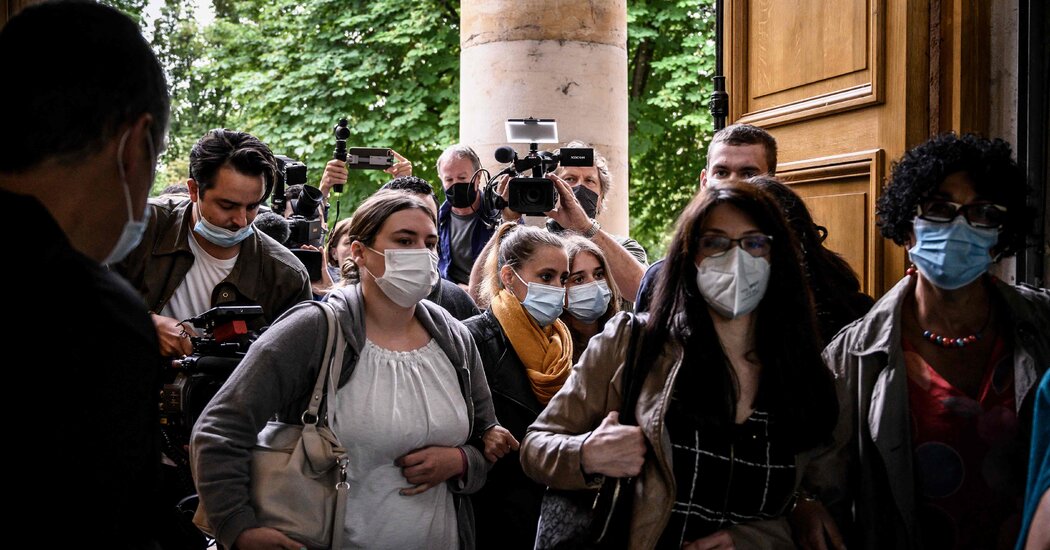 CHALON-SUR-SAÔNE, France — Valérie Bacot was just 12 when her stepfather began raping her. After a stint in prison for abusing her, he returned to the family home and resumed the rapes, she said. The two eventually settled together, for what Ms. Bacot said were 18 years of repeated beatings, sexual assaults and forced prostitution.

“At first it was slaps, then kicks, punches and he would strangle me,” Ms. Bacot, a frail 40-year-old woman, told a French court in emotional testimony this week, recounting how she was “afraid to die every day.” Until the day she killed Daniel Polette, her former stepfather who became her husband.

On Friday, a court was set to rule on whether Ms. Bacot was guilty of murder, or if the killing of Mr. Polette could be excused because of the abuse he inflicted on her.

The case has drawn national attention in France, shedding a stark light on the chronic problem of domestic violence in the country, and serving as a rallying point for hundreds of thousands of supporters who have called for Ms. Bacot’s release, arguing that the killing was justified.

The ruling Friday comes as France has experienced a #MeToo moment that came late to the country, as allegations of sexual abuse against powerful figures forced a reckoning and prompted the government to overhaul legislation on sex between adults and minors.

For five days, the wood-paneled courtroom in Chalon-sur-Saône, a quiet town in France’s central Burgundy region, was the scene of chilling accounts detailing the many flaws that led to tragedy. The court heard of the psychological grip that Mr. Polette had over his stepdaughter, then wife; the authorities’ inaction; and silence from relatives — all of which raised an uncomfortable question: Who was the real victim in this case? Mr. Polette, the murdered abuser, or Ms. Bacot, the abused murderer?

“It was a big mess,” Lucas Granet, a school friend of Ms. Bacot’s four children, who range in age from 14 to 22, told the court, according to French media reports. “In this story, nothing is right from the beginning to the end.”

Ms. Bacot recounted her story in a book published last month, “Tout le monde savait” (“Everyone Knew”), which detailed the relentless misery of her life. When she was 12, Mr. Polette became the partner of her divorced mother and soon coerced the daughter into sex. He was jailed for sexual assault against Ms. Bacot, but was allowed to return to the family home after three years in prison and resumed the abuse, she said, while her mother turned a blind eye.

“Nobody seemed to find it bizarre that Daniel came back to live with us as if nothing had happened,” Ms. Bacot wrote in her book.

At age 17, Ms. Bacot had a child with Mr. Polette and moved in with him. Three more children followed, all living under the grip of an alcoholic and compulsive father who instilled fear in the family and often threatened to kill Ms. Bacot, she said. The two were married when Ms. Bacot was 27, and Mr. Polette was 53.

After a few years, Ms. Bacot said Mr. Polette forced her into prostitution. For 11 years, he made her have sex with clients in the back of his car, giving her instructions through an earpiece, she said. Ms. Bacot’s children told the court that they learned about it when they found business cards their father had made, with the words “escort girl” written on them.

Ms. Bacot said that she knew she had to act after Mr. Polette asked their daughter about her budding sexuality, raising fears that he would soon turn on her.

On March 13, 2016, after she was raped by a client, Ms. Bacot said, she took a pistol her husband had hidden in his car and shot her husband in the back of the head.

The main questions driving the court’s deliberations this week was whether Ms. Bacot was the real victim in this case and if her crime amounted to self-defense.

Her lawyers and experts said that the psychological hold was such that her state of mind was altered and that the killing was the only way out.

“She could not resort to the law,” Denis Prieur, a psychiatrist, told the court. “There is no other possibility than to make him disappear.”

By contrast, the public prosecutor, standing just a few feet from Ms. Bacot, who kept her head bowed, said on Friday that the act was premeditated and could not be excused.

But he also took into account Ms. Bacot’s enduring suffering, requesting only a five-year jail term, of which four years would be suspended, meaning she would not face further incarceration since she already had served one year in prison.

Ms. Bacot, who faced life sentence, said in her book that she expected to return to jail after the trial. Taken by surprise by the prosecutor’s request, she passed out for a few minutes, overwhelmed with emotion.

Ms. Bacot’s case strongly resembled that of Jacqueline Sauvage, who was sentenced in France to 10 years in prison in 2014 for killing her abusive husband, leading to similarly fierce debates about self-defense in cases of abuse. Ms. Sauvage was eventually granted a presidential pardon in 2016, after she had become a symbol for the fight against domestic violence.

Domestic violence has become a growing issue in France, where 146 women were killed by their current or former partner in 2019, according to government data, an increase of 21 percent from 2018. The government has introduced new measures to combat the problem, like more education and more social workers in police stations, but many activists say the efforts do not go far enough and are underfunded.

Ms. Bacot’s children told the court that they went twice to the police in the early 2010s to report their father, but that no action was taken. The police said they had found no trace of these exchanges.

On Wednesday, Ms. Bacot’s lawyers, who also defended Ms. Sauvage, said they had taken legal action against the French state for failing to investigate the case.