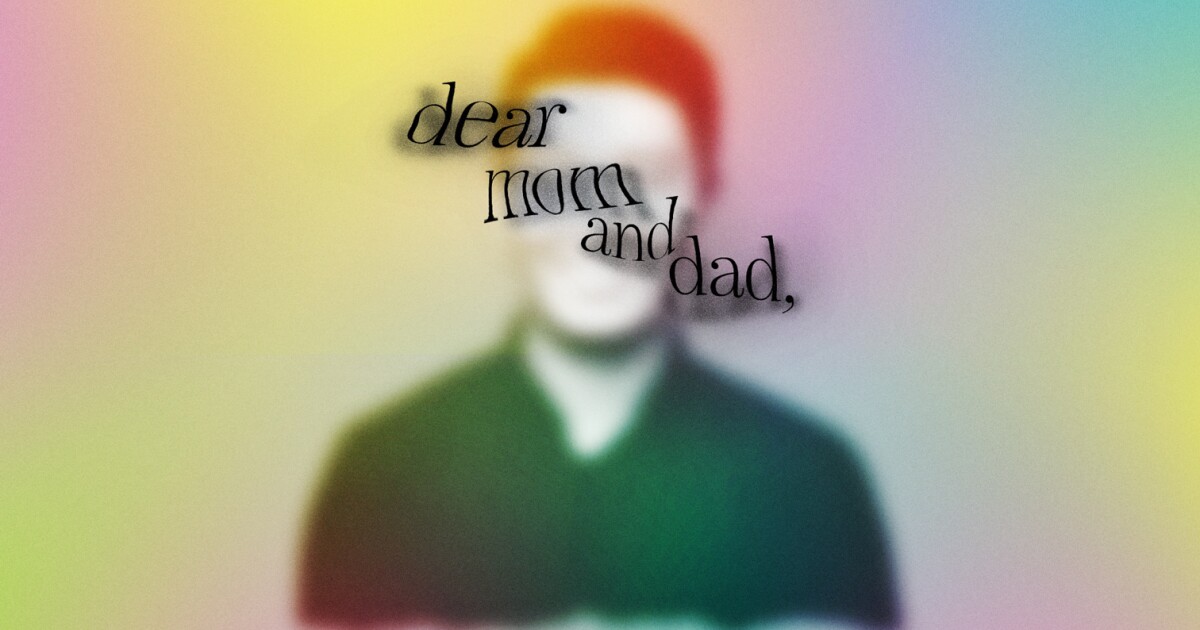 There’s a story that I need to tell, and I know that it’s one that my family should hear first.

But every time I’ve tried to explain these last few years, I couldn’t. I wrote down the words and even rehearsed them, but when the time came they withered in my throat.

So I’m writing this column as a letter to you. Even if I couldn’t tell you first, I wanted you to know that these words are for you.

I’ve been living with depression for most of my adult life. It began with short bouts during college and gradually worsened after I graduated. About two years ago I began having thoughts of suicide, and in a moment of panic, I tried to hurt myself.

It happened at a time when I had so much to celebrate. This column was launching and the podcast I created, “Asian Enough,” was entering production. But my self-esteem was caving in. I began to doubt that I was the protagonist in my own story. I felt an obligation to be happy and was ashamed I couldn’t meet it. I was posing in photos and videos to help promote the podcast when all I wanted was to disappear.

If you or someone you know is exhibiting warning signs of suicide, seek help from a professional by calling the National Suicide Prevention Lifeline at (800) 273-TALK (8255).

My depression was too painful to write about or even admit to myself privately. But it was there, in the accumulated 7-Eleven taquito containers and cigarette butts on the floor of my car; in the slow erosion of friendships; in smashed iPhones and dented desks.

In my journals I see myself grasping for the words to describe it. In 2012, I wrote that depression is when the power of your despair equals the power of your will. Then it was like suffering a dislocation of the ego, or “a slow and spreading numbness.” In one entry I compared my body to an inconveniently large piece of carry-on luggage. Last year I felt like a video game with a broken controller — I mash the buttons but my character on the screen never moves.

My therapist has since given me a better explanation. Everyone has a cup, and when it’s full, you have to take a break. If you don’t care for your mind, you start to cope in unhealthy, destructive ways. You overtax your relationships, battle exhaustion and your sense of normality crumbles.

Over time, the neural pathways in your brain that cause depression, anxiety and anger become deep grooves, while those that lead toward positive emotions fade. Happiness becomes an arduous climb uphill; sadness, a steep and slippery slope.

I worked very hard to hide my sadness from you. Before visits, I would get a fresh haircut, buy new clothes and go on a diet. I’d always drink a lot of coffee before coming over so that my smiles would be more believable. At the dinner table I’d speak loudly of my achievements and successes. My visits were always short because I couldn’t keep up the act for long.

At work, I wrote articles about how Asian Americans are the least likely of all demographics to seek mental health services, but we experience some of the highest rates of suicide and depression. I appeared on panels and spoke about how harmful silence and cultural stigmas can be. I lobbied others to overcome their shame and share their stories with me. But I couldn’t help but feel like a hypocrite, because I feared that stigma too.

Things got worse when the pandemic hit. I felt an overwhelming responsibility to meet the moment, but most days began with crying over my coffee. The isolation was an agonizing reminder of the friendships I had lost.

I began to call out in my sleep. A few times a week, I’d explode awake in the middle of the night yelling and furious, or crying and despondent. I called a suicide help hotline so often that I felt guilty for taking up their time. For the last three months, I’ve been on medical leave to work on my mental health.

I’m sorry you’re reading this in the newspaper. I know you might fear the consequences of sharing my struggles so publicly. But now, at 33, I no longer believe my depression is something to be ashamed of. And I made a promise to a woman I interviewed a few years ago for a story about mental illness. The piece was widely read and now it may be adapted into a film.

When I caught up with her last year, she told me that my story had changed her life, but not in the way I intended. She had lost friends and alienated family members. Some of her relationships would never be the same. She let me tell her story, but I couldn’t protect her from its aftermath. So I did the only thing I could. She shared her family’s secrets with me, so I promised her I’d share mine.

Mom, remember last year, when Ah Mah died, I wrote a tribute to her and posted it on social media. I was scared for you to see it, but then your friends sent it to you and you texted me. You asked for a copy because you wanted to share it with your family. You told me that I did good and that you were glad I posted it.

At Ah Mah’s funeral, you translated my words into Chinese and read them aloud. You announced proudly to the whole family that the words had been written by your son, a Los Angeles Times journalist.

I was a little embarrassed, but it meant so much to me that you wanted to share my words. In that moment, I believed we both understood that there is no shame in suffering, that there is no reason to suffer alone. And now I can truly say that I believe that too.

If you or someone you know is feeling suicidal, call the National Suicide Prevention Lifeline at (800) 273-8255.