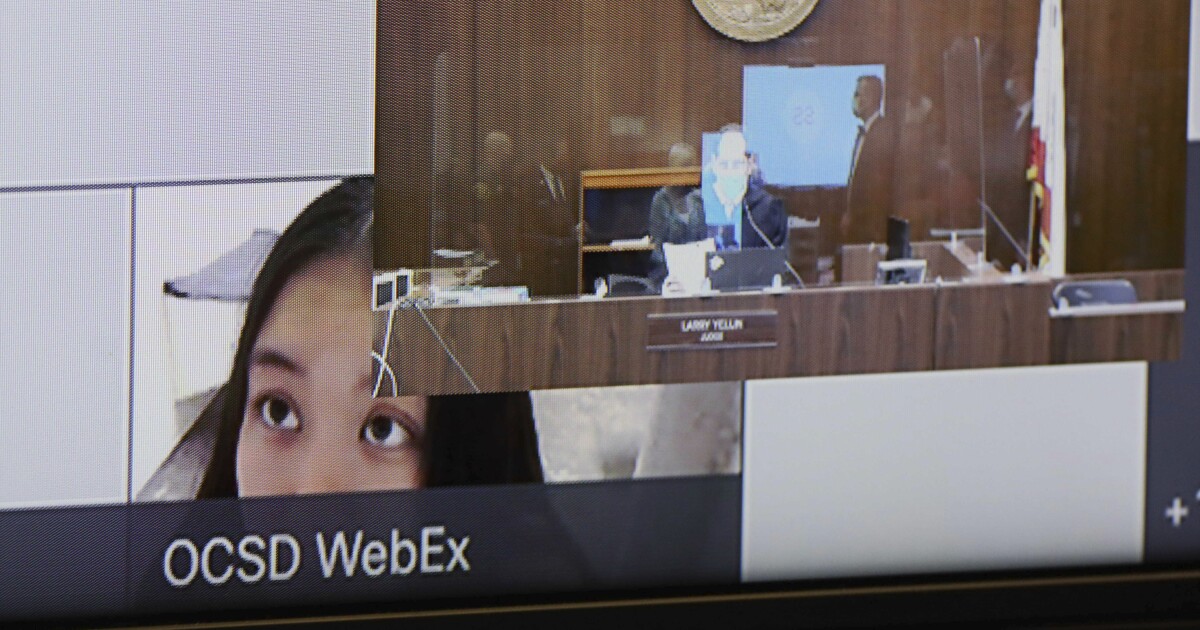 Wynne Lee, 23, was expected to be released from jail after surrendering her passport. She will be subject to GPS monitoring and be barred from having any contact with her co-defendant, court officials said.

Lee and Marcus Anthony Eriz, who is charged with murder in the May 21 fatal shooting, have both pleaded not guilty to their charges.

Eriz remains in jail after his initial $2-million bail was revoked last week.

Lee’s attorney had asked that bail be reduced to $50,000, given her only charge is accessory, but Orange County Superior Court Judge Larry Yellin rejected such a low request.

In reducing her bail, the judge noted that Lee’s original bail was higher than what the alleged crime calls for and that she is not accused of committing any violent act. However, Yellin noted the circumstances of the fatal shooting and said that Lee continued to ride with Eriz as her passenger, saying the act was “absolutely concerning.”

Prosecutors say Eriz and Lee were headed to work in the HOV lane of the 55 Freeway about 8 a.m. on May 21 when they approached a Chevrolet Sonic, which Joanna Cloonan was driving to take her son Aiden to kindergarten. Lee maneuvered her Volkswagen Golf SportWagen into the lane immediately to the right of the HOV lane and then sped back into the HOV lane and cut off Cloonan, gesturing a peace sign in the process, according to court documents.

After a few miles, when Cloonan exited the HOV lane to make her way to the 91 Freeway, she passed the SportWagen and raised her middle finger at Lee and Eriz, documents show. Eriz told police in a June 6 interview that he reacted angrily to being “flipped off.” He grabbed his loaded Glock 17 9-millimeter pistol, readied it, then rolled down the passenger window and shot at Cloonan’s car, according to court records.

“The very minor act on the part of Ms. Cloonan of showing him her middle finger resulted in him using deadly force against her and her son,” prosecutors said in filing charges against Eriz and Lee.

As Cloonan pulled over and took the dying boy into her arms, Lee continued driving onto the 91 Freeway to Highland, where the couple completed a day of work, court documents show. Aiden was taken to Children’s Hospital of Orange County, where he was declared dead at 8:39 a.m.

The pair were apprehended after a massive reward was issued and an extensive investigation by the California Highway Patrol.

The boy’s death sparked a community outpouring of support, with hundreds of thousands of dollars offered to his family and contributed to a reward for finding and arresting the suspects. In addition, a plaque in his honor is set to be installed at the Orange County Zoo.

Eriz is now also accused of brandishing the same handgun at another motorist days after Aiden’s death. A Tesla driver reported that Eriz waved a gun at him near the 91 Freeway in Corona while riding in the same white Volkswagen with Lee behind the wheel.

While the pair have pleaded not guilty to their charges, Orange County prosecutors have said it is possible that they might have been involved in other incidents between December and June, and have solicited witnesses.

Never-before-seen colossal comet on a trek toward the sun