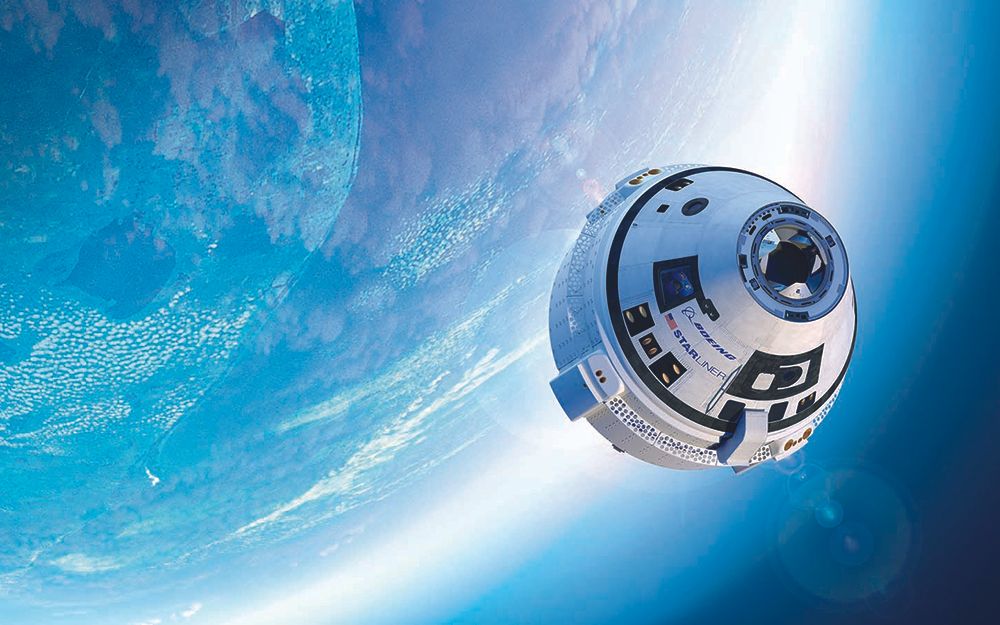 Aerospace giant Boeing is working to send astronauts to space with its CST-100 Starliner spacecraft.

In 2014, NASA selected Boeing as well as SpaceX as partners in its Commercial Crew Program (CCP). As part of this partnership, the companies were tasked with developing spacecraft that would ferry astronauts to the International Space Station.

SpaceX has done so with its Crew Dragon spacecraft, which first carries astronauts to the space station as part of a test flight in 2020 and has since launched multiple crewed, operational flights to the orbiting lab.

Starliner is similar in shape to the spacecraft from NASA’s Apollo program, but this new, commercial spacecraft has electronics that are half a century more advanced. Measuring 14.8 feet (4.5 meters) across at its widest point, the gumdrop-shaped spacecraft will first fly into space aboard Atlas V rockets.

The spacecraft is designed to carry up to seven astronauts, with additional cargo also possible if fewer astronauts fly during a particular mission.

How is Starliner supported by NASA’s Commercial Crew Program

Funding for the development and building of the CST-100 Starliner spacecraft primarily came from the company’s partnership with NASA’s CCP.  As part of the program, NASA is working with business partners to develop and build new rockets and spacecraft.

The overall goal of the program is to send astronauts to the space station using these commercial vehicles, replacing the Russian Soyuz spacecraft that NASA has depended on to send astronauts into orbit since the agency’s space shuttle program ended in 2011.

“The Commercial Crew Program means NASA no longer has to rely only on Russia to take American astronauts to the space station. U.S. astronauts can launch from U.S. soil again,” a NASA statement reads.

With the CCP, NASA aimed to relaunch astronauts from American soil, which had not been possible since the space shuttle retired in 2011. And, in May 2020, the first crewed launch as part of this program successfully launched to space.

“A new era in human spaceflight begins as we once again launched American astronauts on American rockets from American soil on their way to the International Space Station, our national lab orbiting Earth,” now-former NASA Administrator Jim Bridenstine said following the first successful crewed launch with a vehicle from NASA’s CCP: SpaceX’s Crew Dragon spacecraft, which carried astronauts to space for the first time on May 30, 2020.

What testing did Starliner go through

Boeing has been testing Starliner, preparing for its first crewed flight to space, for many years.

In 2011, the company put a 12-by-14 inch model of the CST-100 in a wind tunnel to determine the spacecraft’s aerodynamic characteristics. The model was placed in several different positions to simulate different phases of an abort-mode landing.

In 2012, Boeing did parachute drop tests of the CST-100 to determine how well the spacecraft’s parachutes and airbags worked. Unlike the Apollo missions, Starliner will touch down on land, making the airbags especially important for a smooth and safe landing.

In 2014, Boeing officially unveiled a full-scale mockup of the spacecraft at the Kennedy Space Center, showing the inside of it for the first time publicly. Airbag testing of the spacecraft proceeded successfully in February 2016, and in March 2017 it underwent a successful parachute test in the New Mexico desert.

Boeing conducted an abort engine test in June 2018, but there were issues during the test which pushed the first test flight for Starliner to 2019.

What spacesuits do Boeing astronauts wear

In 2017, Boeing unveiled the spacesuit that astronauts will wear aboard the Starliner.

The suit stands out against NASA’s classic suits and the black-and-white SpaceX suits with its bright blue color. It features several advancements over previous spacesuit designs.

It is smaller and lighter and includes special gloves designed to allow astronauts to use touchpad screens, a feature that is shared with SpaceX’s spacesuits.

When did Starliner first fly

On Dec. 20, 2019, Starliner took off, launching to space for the first time as part of the craft’s first Orbital Flight Test (OFT-1) mission, an uncrewed test flight to the International Space Station where it would dock and orbit Earth for about two days.

The launch took off from Cape Canaveral Florida, taking off atop an Atlas V rocket from United Launch Alliance at 6:36 a.m. EST (1136 GMT) as planned. However, what was not part of the plan was that 90 minutes after takeoff, Jim Bridenstine, the NASA administrator at the time, announced that the capsule would not reach the space station as planned.

“Today, a lot of things went right, and this is in fact why we test,” Bridenstine said at the time. “If we would have had [a] crew in there, number one, they would have been safe.”

However, while the hypothetical crew on board would have been safe, according to Bridenstine, the capsule would not reach the space station. The spacecraft experienced an off-nominal insertion as it was set to complete a 40-second orbital insertion burn. The capsule’s internal clock that helps to control timed events during the launch sequence had an error so the capsule burned too much fuel to safely dock with the space station.

The teams at Boeing, instead, had the capsule land in New Mexico and use airbags to make a soft touchdown on land, which was a critical testing item.

In July 2020, a joint NASA-Boeing Independent Review team completed an investigation into OFT-1, a lengthy and detailed review of the test flight.

When will Starliner fly again

With 80 “corrective actions” needing to be addressed following the off-nominal OFT-1 test flight, Boeing planned to launch a second uncrewed test flight before it began launching crews to space.

To prepare for the flight, NASA and Boeing resolved all of the corrective actions recommended by the NASA-Boeing Independent Review team.

“Boeing has implemented all recommendations, even those that were not mandatory, ahead of Starliner’s upcoming flight,” Boeing said in a statement.

Boeing announced June 16 that they had begun fueling the Starliner crew module and service module ahead of the launch at NASA’s Kennedy Space Center in Florida. After fueling is complete, teams from both Boeing and ULA will transport Starliner to the Vertical Integration Facility (VIF) at Space Launch Complex-41 at Cape Canaveral Space Force Station where the spacecraft will be mated with the Atlas V rocket.

Leading up to the launch, the mission control teams will continue to conduct simulated mission dress rehearsals for the uncrewed flight.

During OFT-2, Starliner will autonomously dock with the space station using a vision-based navigation system, delivering about 440 lbs. (about 200 kilograms) of cargo and crew supplies for NASA. The craft is set to spend between 5 and 10 days in orbit before undocking from the station and coming back to Earth. Again, using its airbag system, Starliner will touch down on land in the western U.S.

This article was originally written by Live Space.com contributor Elizabeth Howell and has since been updated.