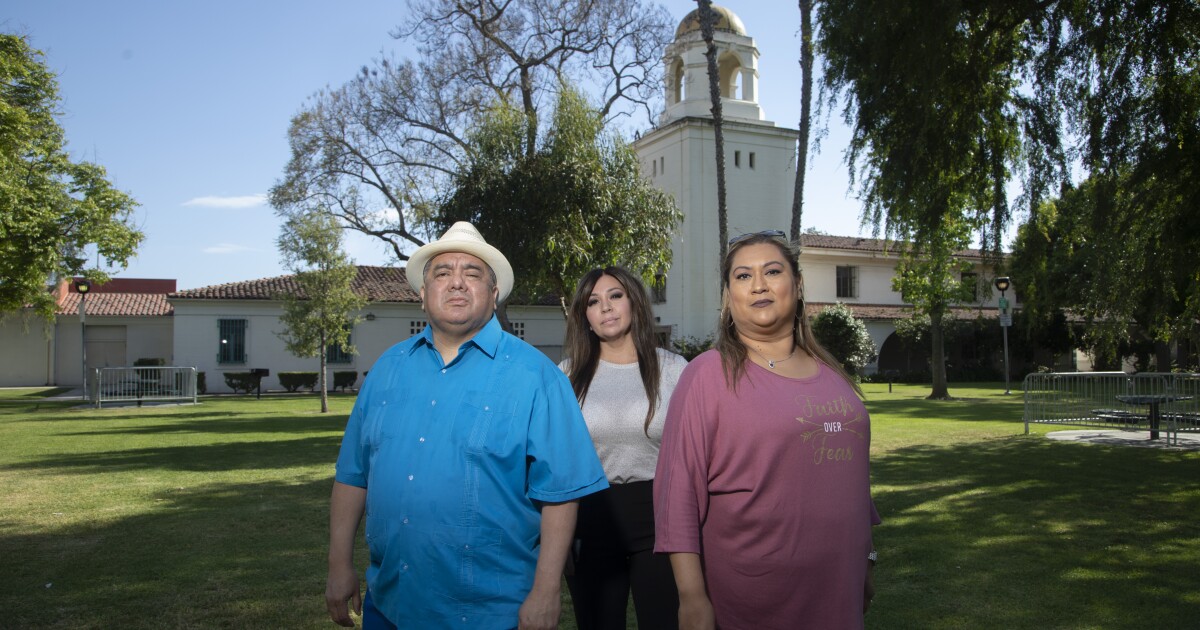 The cluster of small, working-class cities southeast of downtown Los Angeles has long had a reputation for political scandals and slippery financial dealings.

A decade ago, the tiny city of Bell became infamous for paying its City Council and executives outsize salaries. Next door in Cudahy, a reformist candidate for City Council who railed against corruption had bricks thrown through his windows and a Molotov cocktail tossed at his house. And this year, prosecutors accused the former Maywood mayor and a former councilman of taking bribes from city contractors.

Trouble in this region that has been called a “corridor of corruption” erupted again in recent months — this time in Huntington Park, a hard-pressed community that ranked highest in California in a national “misery index” of poverty, commute times and civic engagement.

A city budget analyst was arrested, and most of her colleagues in the finance department were placed on leave and escorted from City Hall. The allegation was that the analyst had breached confidential records.

The action touched off a firestorm: City officials had awarded questionable contracts and were retaliating against those who spoke out, current and former city employees alleged. Two state lawmakers demanded an audit of the city’s finances. Then a police officer — the same one who detained the budget analyst — criticized the mayor on Facebook. He and several other officers were relieved of duty pending an investigation.

City leaders have offered few explanations and deny charges of retaliation or wrongdoing. They dismiss recent accusations of fishy financial transactions — including from a Black state lawmaker — as “racial bias” against an area made up largely of Latino immigrants and their children.

Fernando Guerra, a professor of political science and Latino studies at Loyola Marymount University, said no studies have been done to determine whether the cities of southeast Los Angeles County are more prone to corruption than other regions. Such assertions are “more opinion that fact,” he said.

The latest furor began April 8 when Teresa Garcia, a budget analyst who had worked for the city for 16 years, was detained by police and arrested by officers from the Los Angeles County Sheriff’s Department.

The city released a statement saying the arrest was prompted by a “large-scale security breach of electronic financial records at Huntington Park City Hall” that was “intercepted and contained.”

Within days, five more finance department employees were escorted from City Hall and placed on leave. City officials did not explain the action, saying the investigation and personnel matters are confidential. The finance department, which employs nine, was closed to the public for at least a day. City officials said some of its functions, such as accounting, have been temporarily outsourced to keep City Hall running.

Garcia soon added to the intrigue when she filed a legal claim against the city, usually a precursor to a lawsuit.

In the claim, Garcia said she heard the FBI was investigating the city and downloaded finance records to a hard drive because she was “concerned about being implicated in corruption in the city.” She said she was arrested on suspicion of unauthorized computer access and fraud.

An FBI spokeswoman would not confirm whether the agency is conducting an investigation.

Oshea Orchid, an attorney representing the workers on leave, said her clients have done nothing wrong and were targeted in an attempt to cover up suspicious bank transfers and city contracts that some employees allege were being improperly awarded.

In an April 23 letter to the Joint Legislative Audit Committee, Jones-Sawyer and Garcia wrote that the city has a history of malfeasance and violating the public’s trust.

“Watchful Huntington Park residents have pointed out for years that lucrative city contracts are being awarded to businesses where city officials or close associates have vested interest,” they wrote.

The lawmakers also asked the auditor to examine the City of Commerce, but provided no specific details about their concerns. A lawsuit filed last year by a business alleges a pay-to-play scheme involving cannabis licensing.

During a nomination hearing for recently appointed state Atty. Gen. Rob Bonta, Jones-Sawyer referred to the county’s southeast area and urged Bonta to help “finally put this corrupt crescent out of business.”

In a subsequent tweet, Jones-Sawyer apologized and said he should not have used a “broad brush” in his comments.

Huntington Park, nestled between the 10 and 710 freeways, is home to about 60,000 people packed into three square miles in one of the most densely populated regions in the U.S. Its commercial strip along Pacific Boulevard is an historically significant shopping and cultural destination, studded with Art Deco architecture built during the 1920s and ’30s.

Residents have long complained about some of the city’s contracting practices.

Two decades ago, city officials handed a $7-million trash contract to a friend of the then-mayor without competitive bidding. In 2015, the council approved a contract with a politically connected bus service provider that employed members of now-Mayor Graciela Ortiz’s campaign team, including her brother. Ortiz, then a council member, voted for the contract. She said the connection played no role in her vote.

Councilman Eddie Martinez said current city leaders have done nothing wrong and are trying to fix mistakes from the past. Any state audit, he said, should examine what he alleged were large amounts of debt from previous administrations “kicking the can down the road.”

An internal audit completed in November of city finances for fiscal year 2018-19 found a sharp rise in deficiencies from previous years, including financial statements not properly reconciled and shoddy record-keeping, leaving the city vulnerable to embezzlement and fraud.

An audit for the 2019-20 fiscal year has not been completed.

A city spokeswoman said the audit showed that finance staff have failed to perform accurate bookkeeping as far back as 2012.

However, many employees allege the city’s current leadership often ignored bidding and other contracting requirements designed to prevent cronyism.

In a November lawsuit, four current or former employees allege they were the victims of retaliation for opposing improper discounts on city fees and waving internal financial controls.

Catalina Peraza, a finance assistant who was laid off last year, said city officials granted an 80% discount worth $800 on opening a water account for the campaign headquarters of then-Assembly candidate Efren Martinez after she refused to do so, according to the lawsuit and interviews. Martinez lost his bid in November to unseat Jones-Sawyer.

Another former employee alleges she was reprimanded and laid off after reporting that a pot dispensary connected to Martinez was operating without a license.

City officials declined to comment on the specifics of the lawsuit but denied the allegations in a statement to The Times.

Meanwhile, many workers have rallied to Teresa Garcia’s defense. Edwin Aragon, a former senior accountant who is a plaintiff in the lawsuit, alleged that Garcia’s electronic devices were seized to “bury the truth.”

City Manager Ricardo Reyes denied the allegation. “There isn’t anything that the city is hiding,” he said.

Weeks after Garcia’s arrest, the Huntington Park Police Officers Assn. posted a video of Jones-Sawyer’s comments about the “corrupt crescent” of cities on the union’s Facebook page. Ortiz, the mayor, replied to the April 22 post, calling it “irresponsible and unprofessional.”

In response, Mike Navia, a Huntington Park police officer and union board member, sharply criticized Ortiz, saying among other things that she had voted for a city bus contract with the company that employed her brother.

Days later, Navia was placed on administrative leave. Three other police union leaders were also placed on leave, according to two sources familiar with the matter.

COVID-19 Delta variant spread in California: How bad is it?