Half a Million Covid Dead in Brazil, and Counting 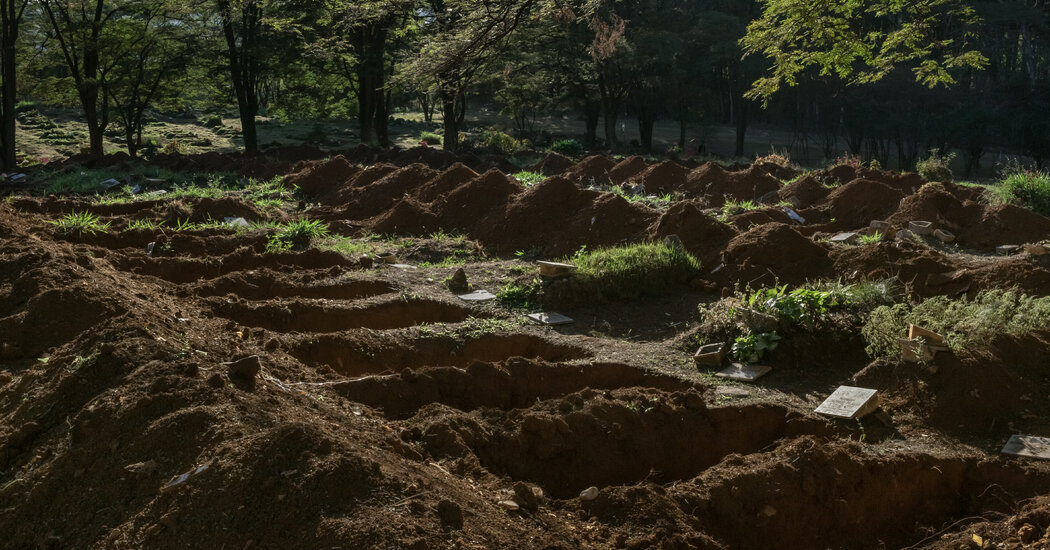 By Ernesto Londoño and Flávia Milhorance

RIO DE JANEIRO — Brazilians were recovering from Carnival in the heady days of February 2020 when the first known carriers of the new coronavirus flew home from Europe, planting the seeds of catastrophe.

In Brazil, Latin America’s largest nation, the virus found remarkably fertile ground, turbocharging the outbreak that has turned South America into the hardest-hit continent in the world.

Brazil recently surpassed 500,000 official Covid-19 deaths, the world’s second-highest total behind the United States. About 1 in every 400 Brazilians has died from the virus, but many experts believe the true death toll may be higher. Home to just over 2.7 percent of the world’s population, Brazil accounts for nearly 13 percent of recorded fatalities, and the situation there is not easing.

President Jair Bolsonaro has led a strikingly lackadaisical, dismissive and chaotic response to a coronavirus crisis that has left Brazil poorer, more unequal and increasingly polarized. Social distancing measures have been spotty and badly enforced, the president and his allies have promoted ineffective treatments, and for months the government failed to acquire a large number of vaccines.

“As a Brazilian, it’s appalling to see the throwback following three decades of health achievements happening so fast, with devastating consequences,” said Marcia Castro, the chair of the Department of Global Health and Population at Harvard University.

As the virus began spreading from large cities to remote corners of Brazil last year, it took an especially high toll in the Amazon region. By January, patients in the state of Amazonas were suffocating to death after the government was late to heed warnings about oxygen shortages.

Now as the country struggles to vaccinate people, the region’s isolated villages, deep in the rainforest and often accessible only by river, still present a unique challenge.

Mr. Bolsonaro has told Brazilians repeatedly that they had nothing to fear. The social distancing, lockdowns and travel restrictions that became the norm elsewhere were wild overreactions that would devastate Brazil’s economy, he warned.

“In my particular case, given my history as an athlete, should I become infected, I would have nothing to worry about,” Mr. Bolsonaro said in March of last year. “I wouldn’t feel a thing, or at most, it would be a measly cold, a little flu.” (He later tested positive for the virus and appeared to have only mild symptoms.)

That cavalier attitude alarmed doctors in Brazil, which has a solid track record of finding innovative solutions to vexing health problems.

Mr. Bolsonaro fired his first health minister in April of last year, after their disagreements over virus containment became public. The next minister lasted barely a month, unwilling to abide by Mr. Bolsonaro’s effusive endorsement of hydroxychloroquine, an anti-malaria pill that has not been shown to effectively treat Covid-19.

Then the president put Eduardo Pazuello, an army general with no background in health care, in charge of the ministry. He has been faulted by lawmakers for allowing the outbreak to spiral out of control this year, pushing the health care system to the point of collapse.

Even after all the hard lessons that have been learned and adjustments that have been made, hospitals in cities like Campo Grande, in the hard-hit western state of Mato Grosso do Sul, are overwhelmed.

The pandemic abated in the fall, worsened over the winter and exploded in the spring. Brazil’s official death tally averaged fewer than 400 a day in early November, but soared to more than 3,000 a day in early April — tragedy on a scale few would have predicted.

In recent weeks, the daily death toll has exceeded 2,000, and new cases are surging again.

Dealing with death has become routine for Maurício Antonio de Oliveira, 51, a supervisor at the Grupo Eden funeral home in São Paulo. But 15 months into the pandemic, he hasn’t gotten used to the particular viciousness Covid inflicts on families of the deceased.

Open coffin viewings are normal in Brazil, which allows the grieving to say a final farewell. But such funerals are prohibited for Covid victims.

“It’s very cruel because the person with Covid is hospitalized and then you don’t see them anymore,” he said. “They want to see their loved one, but there’s no way.”

By April of last year, many hospital intensive care units were overloaded, leaving families scrambling to secure beds, or even chairs, in packed emergency rooms.

Francis Albert Fujii, an emergency care physician in São Paulo who helps transport critically ill patients to hospitals, spent the early months of the pandemic cloistered in his apartment when he wasn’t working. Dr. Fujii, 41, a divorced father of two, missed family milestones and went a year and a half without seeing his mother.

The virus killed two of his co-workers, a fellow physician and a nurse.

“My biggest fear wasn’t even getting sick,” he said, “it was infecting someone.”

Things quieted down later in the year, but then the second wave hit, far worse than the first.

“We’ve been in this battle for 15 months and there’s no way out of the crisis,” he said. “I’m very sad about the situation we’re in. We need leadership that believes in the disease and takes the situation seriously.”

During recent congressional hearings on the pandemic, a Pfizer executive said that last year officials ignored repeated offers from Pfizer to sell its Covid vaccine to Brazil.

The scarcity of vaccines has left governors, mayors and private sector leaders scrambling to strike their own deals with suppliers.

Mr. Bolsonaro has expressed skepticism and at times ambivalence about the importance of vaccines, once joking that vaccine makers would not be held responsible if people who were inoculated turned into crocodiles.

“This has definitely been mismanaged,” said Carla Domingues, an epidemiologist who ran Brazil’s national immunization program from 2011 to 2019. “We didn’t believe in the need for vaccination, and we didn’t even believe a second wave was coming.”

At the end of March, as deaths soared, only 7 percent of Brazilians had been at least partly vaccinated. The campaign has accelerated since then — around 30 percent of the population has had at least one dose — but it still has far to go.

Lawmakers in April formed a special committee to investigate the government’s response to the pandemic. For several weeks, the panel has held televised hearings that have put Mr. Bolsonaro’s government on the defensive.

Members of Congress have asked why the government mass produced and distributed hydroxychloroquine long after leading medical authorities had warned against its use, and why it waited so long to start buying Covid vaccines.

The hearings have also aired suspicions that Mr. Bolsonaro actually wanted to let the virus spread freely, to reach “herd immunity,” no matter the cost — though experts question whether that goal is even attainable. Critics have accused the president of choosing the economy over lives, without saving either one.

Growing political pressure has not led the government to correct course or take responsibility for missteps. In fact, Mr. Bolsonaro’s government has vigorously fought efforts to rein in transmission, fighting, for instance, for the right of churches to hold services this year, even as hospitals were having to turn patients away.

Anger over the response has incited large demonstrations. The rage of protesters is evident in the word used most often in posters and graffiti to decry Mr. Bolsonaro’s actions and inaction: genocide.

Hold the Tequila. The Sunrise Is All Some Travelers Need.