Had enough of Garcetti? I’m tossing my hat into the ring 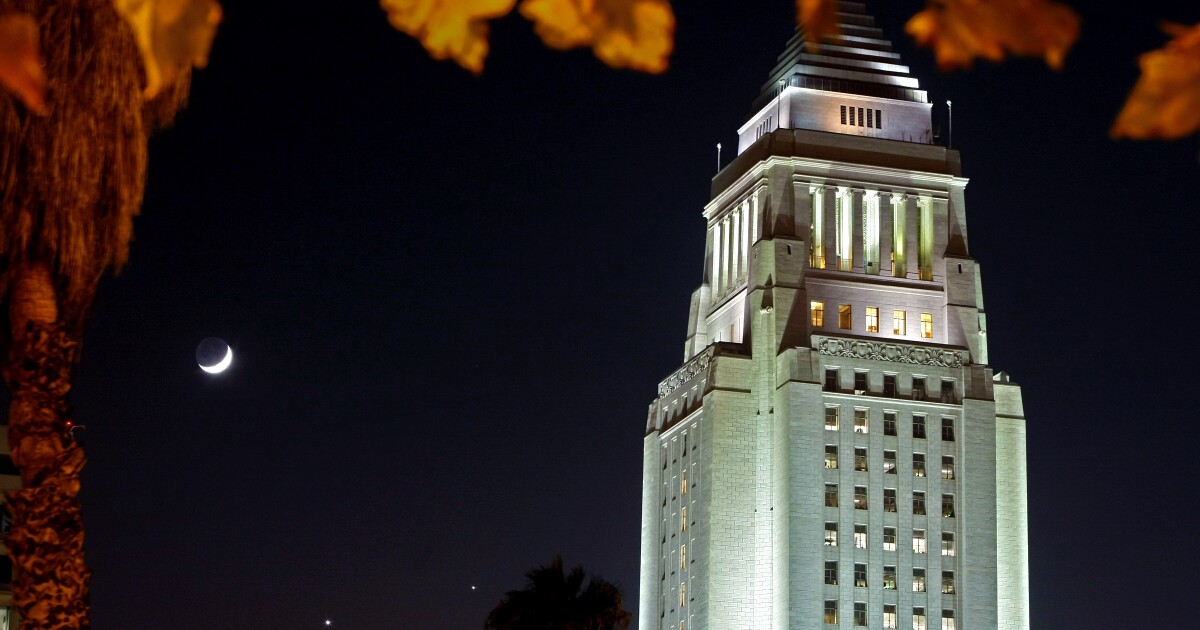 If Los Angeles Mayor Eric Garcetti leaves City Hall to become U.S. ambassador to India, I’d like to toss my hat into the ring as his replacement.

I currently live a couple of blocks outside the city limits, but if I’m appointed to fill out the last 18 months of his term, I’ll move immediately into the mayor’s mansion in Windsor Square and officially change my residency.

I haven’t yet told my wife, who wondered if I’d suffered a head injury five years ago when I briefly considered running for the seat of termed-out City Councilman Tom LaBonge. So I don’t have total clearance just yet, but I believe I can be of service.

Have you been following the news out of City Hall the last several days?

I have, and it’s time for a change.

Three things in particular have me worked into a lather, and I’m not even talking about Los Angeles being the epicenter of homelessness. Not today, anyway.

Fireworks. Cops and firefighters who refuse to get vaccinated. And the junior high gossip club at City Hall.

Unless you have locked yourself in a soundproof booth through July, which I’ve considered doing, you no doubt have noticed the steady, escalating rumble of explosions. We’re coming up on the Fourth of July, so that means that roughly every 10 seconds or so, some knucklehead lights explosives in a warmup for the big day.

You may also have noticed that it doesn’t rain here anymore and that the entire city is drier than the sawdust at Philippe the Original. One errant spark and it could be instant conflagration. Last year, palm trees ignited by fireworks in Northridge went up like kindling, destroying half an apartment building and putting 50 residents out on the street. And the L.A. Fire Department responded to 424 more emergency incidents on the Fourth of July last year than the daily average.

City Atty. Mike Feuer this week sent cease-and-desist letters to four online platforms, including Facebook, demanding the removal of offers for online fireworks sales. “We are at this moment of intense risk … and fireworks pose a grave threat,” Feuer said.

OK, but nothing has worked in the past, including attempts to cut off the supply.

“It’s like the war on drugs but without funding,” a state arson investigator told me last year, saying that even with large busts, there’s no shortage of easily available fireworks.

So if I were mayor, I’d call the city attorney and the chiefs of fire and police. I’d sit them down and say, folks, we gotta raise the fine for lighting up the sky from $1,000 to $10,000, we’ve gotta make some quick arrests, and we’ve gotta do some perp walks.

TV news would cover that. The other night, with no car chases going on, I saw wall-to-wall coverage of cows wandering around Pico Rivera.

(OK, I’ll admit it. I was riveted. And I was rooting for the cows, who escaped from a slaughterhouse. Are these the smartest cows in captivity?)

A nightly fireworks perp walk, with aerial news chopper coverage, could develop a cult following. I don’t know if it’d be as good as cows on the loose, but I’d watch. And if the arrestees can’t pay the fines, they should get a year of community service clearing brush and digging firebreaks.

Speaking of the LAPD and LAFD, did you see the news that only about half of all cops and firefighters have been at least partially vaccinated? That’s a far cry from the 64% for L.A. residents 16 and older and 72% for California adults.

The Delta variant of the coronavirus, which can be twice as transmissible as earlier strains, is now spreading in California. The very people working the front lines, and coming into daily contact with the public, don’t see the need to protect themselves, their families and the people they run into? To date, 2,700 police personnel have been infected and nine have died.

Even former President Bozo — who hosted super-spreader events, got COVID-19 himself, refused to wear a mask and probably got people killed because of it — had the sense to get vaccinated.

Last fall, I wrote about firefighters raking in millions in overtime at coronavirus testing sites. I didn’t see why we needed firefighters doing that job, but their work was defended as an important public service, by trained professionals, in the interest of public health and safety.

How about getting vaccinated so you don’t spread a killer disease? Wouldn’t that be in the interest of public health and safety?

Sure, there might be legitimate concerns on the part of some people about the safety of vaccinations. But there is also overwhelming evidence that they save lives and that the benefits far outweigh the risks.

The Police Commission has asked the LAPD to look into whether it can mandate vaccinations for officers. As mayor, I’m going to lead the charge on this. And I’m going to tell the police and fire chiefs to get tough and accept no excuses.

After solving those two problems as mayor, I’d quickly move on to the long, endless parade of corruption and scandal at City Hall, a pay-to-play house of worship with an increasingly amateurish workplace culture.

As if the ongoing saga of a lawsuit accusing a former Garcetti aide of sexually harassing an officer on the mayor’s security detail wasn’t bad enough, now we have a soap opera case of cybergossip and derision by a top-level Garcetti aide and other City Hall operatives.

Under a photo of Huerta, Guerrero wrote, “I hate her. You hate her,” adding in Spanish that Huerta was a “jealous old lady.”

“Has been,” wrote Linda Lopez, former head of L.A.’s Office of Immigrant Affairs.

Look, people are entitled to dislike other people, including icons. But if they’re dumb enough to post their shabbiness on social media, even if they assumed it would remain private, their professionalism and integrity are in tatters, and they pose a big liability going forward.

Garcetti said he asked Guerrero to “step away from her executive management responsibilities” and make things right with the people she insulted. The mayor’s spokesman said Guerrero would be on leave for the “foreseeable future, unpaid for a month.”

As mayor, I would have given Guerrero two options:

Resign or be fired.

There’s a reason the mayor has a bully pulpit. It’s because sometimes you have to be a bully.

If you’ve got a problem in Echo Park or Venice, you don’t hibernate. You step up and tell us what you’re going to do about it, and that holds true on fireworks, unvaccinated cops and firefighters, City Hall scandals and everything else.

I’m available to move into Getty House as early as this weekend, and I have only one question:

Is furniture one of the perks, or do I need to bring my own stuff?